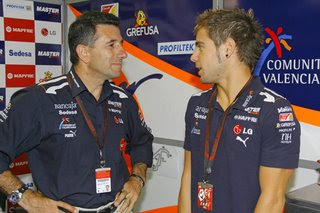 Jorge Martínez, also known as “Aspar”, (born August 29, 1962 in Alzira, Valencia, Spain) was one of the most successful motorcycle racers in Grand Prix motorcycle racing history with 22 Grand Prix victories to his name in the 80 cc class and a further 15 wins in the 125 cc class.

He entered his first Grand Prix in 1982. Between 1986 and 1988, he claimed a total of four World Championships in these two categories, three times in the 80cc event and once at 125 cc. In 1988 he achieved the ‘double’, taking both crowns that year. His nickname was Aspar, a Spanish link with the shoe making industry which was given to him as a direct result of his father’s occupation as a cobbler.

The Spanish company Dinamic created a licensed racing game called Grand Prix Master around him. After his competitive career had ended in 1997, he went on to manage his own organisation, the Aspar Racing Team with Alex de Angelis as his rider.
Aspar runs two squads in the 2008 championships – 125cc and 250cc; with Alvaro Bautista and Hector Faubel riding in 250cc and Gabor Talmacsi, Sergio Gadea and Pere Tutusaus riding in 125cc.

Aprilia Racing saw varying successes. They were extremely successful in the smaller displacement categories, winning numerous races & championships in the 125 cc Grand Prix and 250 cc Grand Prix classes. However, their 500 cc Grand Prix bike was less competitive, and their MotoGP effort, dubbed the RS3 Cube, was technically advanced but difficult to ride and performed poorly in the championship.

The Cube did, however, feature many advanced technologies either not seen or only being seen now in other MotoGP bikes – technologies including fly by wire throttle and pneumatic valve actuation systems. They were 3nd in manufacturers points and 2nd in rider points in the World Superbike Championship 2001 with rider Troy Corser. This was their high water mark for that series. They used a homologation special version of their road bike the RSVR Mille. The motor for the racebike was specially built by Cosworth.

The company is also notable for choosing somewhat atypical engine configurations. For example, they progressed with development of a V2 500 cc Grand Prix bike when other teams were moving to V-Four configurations for what some believed was better & more usable power outputs. Aprilia continued this trend, taking advantage of lighter minimum weights with the introduction of their RS3 MotoGP bike – featuring three cylinders in an inline triple layout, the bike had the least number of cylinders on the Grand Prix paddock. Yamaha had gone ahead with an inline four layout, whilst Suzuki and Ducati went for (differently-designed) V-Four layouts. Honda took the idea even further, producing the championship-winning RC211V, powered by a V5 cylinder engine.