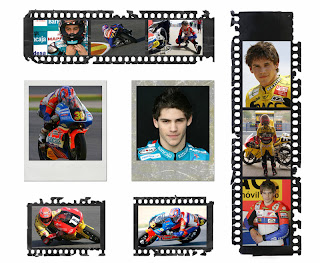 (*Above: some images from Pere’s motorcycling career)

With the CEV Buckler championship kicking off today in Valencia, in which Pere Tutusaus – the Bancaja Aspar 125cc Team rookie is also competing, as well as the main MotoGP 125cc class – it seems as good a time as any to post a general biography and career history of the rider from Igualada…
Source: Aspar Media

For Pere Tutusaus – the youngest member of the Bancaja Aspar Team – living in the world of two wheels, began at the age of two once his mother gave him his first motorbike, a Yamaha Piwi. At the age of seven, Pere started racing in Tous, a small village near Barcelona, and he scored the 11th position at the finish.
The following year (1998) he competed in the Cataluña initiation enduro championship, with a KTM given to him by his father the year before. He finished 3rd.
Throughout this year he made the third step of podium, except in the last race where he finished second. The quality of young Pere was evident and continued in 1999 when he was proclaimed champion of Cataluña initiation enduro championship, winning all the races except one. Those days he was riding a Polini motorbike in TV-Competition team (Tutusaus-Vila) created by his father.

2000 was a difficult year for Pere when he ran in the Cataluña enduro 65cc championship. That year the 65cc and 80cc were united categories and the adaptation became complicated.
Even so, the rider from Igualada also ran in the Cataluña supermotard and enduro championship – gaining the third position at the end of the season, riding a Kawasaki.

In 2001 Pere ran in the Cataluña and Andorra Promocup championships and managed runner-up with a Conti motorbike.
In 2002 Pere showed his value and skill once again and became RAC 50cc champion.  The Spaniard was extremely strong thourought the season and won all races except two. One, in which he could not race because of a bone fracture, and last race that was run in rain, in which Pere clinched the title. That year Pere also won a race in the Spanish cup in Valencia. The reward of a season filled with triumphs was to travel to the United States to compete as a Wild Card in the American mini motos championship. Pere ran in the categories of 50cc and 80cc and he collected a win and a third position. It was a great feat considering that he ran both races with a 50cc Metrakit and Pere remembers this North American adventure with much affection.

In 2003 Pere made his debut in 125cc, being part of the RACC Impala team (Honda) in the championship of Cataluña where his best result was a second, which he scored twice. That year he also made his debut in the CEV (Spanish championship) at the circuit of Albacete, where he did one of the best starts of his career to date: from 20th position on the grid he arrived at the end of the straight in the lead. A collision with another rider made him lose many positions, although he finally crossed the line in 16th.

In 2004 he ran in the championship of Cataluña and all the races of the Spanish Championship with the RACC-Caja Madrid Team (Honda), under the guidance of Emilio Alzamora and finished 22nd in the overall classification. In 2005 Pere continued in the RACC-Caja Madrid Team and won for the first time in 125cc., in the third race of the championship of Cataluña in Albacete. It was a hard year for the young rider, because he had many problems with the engine of his Honda which broke in several races.
In 2006 Pere raced with the RACC Derbi Team and, having recovered his optimism as well as his good speed, managed a second position and finished the fifth in the final classification of the Spanish Championship. This allowed him to make his debut as a Wild Card in the Cheste Grand Prix, where he finished in 26th.

The 2007 was probably one of the best years in the Pere’s career, because with the FMCV-Team he performed among the best riders currently in Spain and was able to finish fourth in the overall classification of the CEV championship. This year Pere also won a CEV race. It was the first race of the national championship that was run in Albacete, where the young rider won and also took the pole. The current roikie of the Bancaja Aspar Team was Wild Card in the Grands Prix of Portugal, Jerez, Cataluña and Valencia. His best results in his first grand prix outings that year was 16th in Jerez.

All these great results and achievements have opened doors for the 125cc rookie and that is why he is now riding at the Bancaja Aspar Team. Thus, Pere hopes to take much experience quickly because: “it is amazing to be able to run with two riders like Hector or Sergio from whom I can learn many things”. The young rider has a three year contract under the leadership of one of the icons of the MotoGP world, Jorge Martinez – “Aspar” himself. In 2008 Pere runs in both the CEV and the MotoGP 125cc world championship.