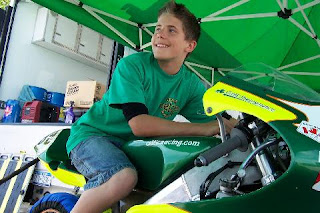 As you may be aware, although Aspar have replaced Pere Tutusaus with Adrian Martin for the rest of the 125cc World Championship season, they have also elected to run an American (“local” I’m guessing is their definition / reason on this…?) for the Indianapolis round.
His name is Patrick Jacobsen, and so we’ve pulled together a bit of info about him from various sources for you…