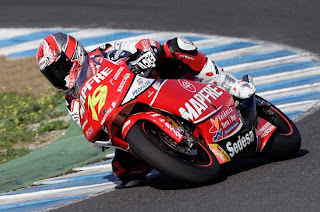 (*Above: Alvaro during the Jerez test)

The Mapfre Aspar Team has released the transcript of an interview with Bati, covering a number of matters surrounding testing, his accident at Valencia, his return to fitness and his outlook ahead of the 2009 250cc MotoGP season.

We began the preseason (testing) very well; riding fast, but mainly working with the beginning of the championship in mind. We wanted to try several things, to select the ones that will help us to do well and to discard the ones that don’t. I found I had a lot of confidence and it is clear that this year we are going to go “all out” (for the Championship). If we are able to begin with a good base the results will arrive earlier.
There are not too many new technical features to try, therefore we are trying to exploit what we already have. We’ve been busy testing adjustments to the bike which we did not have time for during last season. We will try to find solutions that make us just that little bit better than the past year.

He also explains the accident, and the operation and recovery…

Analysing in hindsight what happened (with the Valencia testing accident), I believe that the fall was foreseeable since the conditions were not the best. It was very cold and there was wind and rain, and in these conditions you always gamble and that day we lost. I fell, but the reason was the bad condition of the
track, therefore it does absolutely not worry to me. I know that when we ride in good conditions we return to being fast.
At first in the circuit hospital they said to me that it would need three weeks of absolute rest and that I could slowly start to work again after that. That complicated things because maybe I would not have been in
a position to start the year fully fit, so along with doctor Villamor we decided to operate. The week following the operation I began to do all types of excercise, and the truth is that this has much accelerated the recovery process. I hope that the next time I climb onto my bike I will be 100% fit.
After the operation I wasn’t allowed to do any excercise for one week, not because of the surgery as such, but to avoid that the wound opening up again. I could move the arm perfectly, and in fact doctor Villamor advised me to move it a lot so I wouldn’t lose any mobility. The following week I began to work in the gym and this week they will remove all stitches from the scar, and I will return to the training routine that I had before the fall.

I have the desire to return to maximum fitness and climb back onto my bike to carry on with the good work of Jerez. One has to see if the time is on our side and we can continue to improve. If we do not have any more misfortune, we will get to the first race with things quite clear and having done very encouraging preparartory work.
My confidence will be the same (as before the fall) and the only thing I will think is to try and enjoy myself as I have done up until now.
Mainly I want to see how I feel on the bike. I hope that this injury does not influence me much. I aim to be back to 100% fitness, and the idea is to continue working with the same confidence and optmism that we displayed during the test in Jerez. If we could improve the bike a bit more it would be perfect, but also just with having a good feeling for the bike and the collarbone not bothering me I would be satisfied.