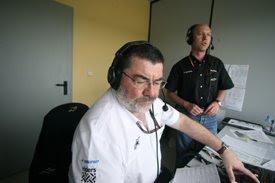 Following the brilliant news that Eurosport will retain their coverage of MotoGP this year, it’s great to know that Julian Ryder will also be joining the previously confirmed Toby Moody in the commentary box.
Whilst it’s a shame that Randy Mamola isn’t on the crew, it’s Toby and Julian who are central to my enjoyment of the coverage (particularly as it’s more about 125 and 250 which he doesn’t really involve himself in).

So this year promises fabulous 125cc and 250cc coverage of sessions across the weekend AND Messrs Moody and Ryder doing the commentary.
Awesome. Fantastic. Brilliant.

In fact, exactly as it was last year before DORNA and the bloody Beeb went and tried to crap all over it!