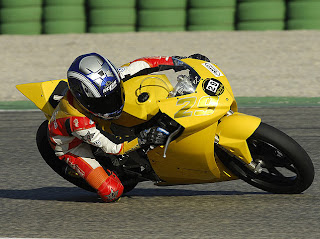 (*Above: Juanjo during preseason testing at Cheste)

Just to keep you up to date on the news from Talavera de la Reina of young gun Juanjo Nuñez, he’s ready to kick off his 2009 season (competing in the 80cc Mediterranean Cup – “Copa del Mediterráneo”) this coming weekend after testing and training since the new year.
Although there’s been a bit of a dint in his progress at his last testing session before the season’s first race at Castelloli, when he fell during a day of rainy, tricky and changeable conditions, hurting his hand.
Juanjo was treated initially at the circuit hospital who feared broken bones and immobilized his fingers – however further tests and x-rays at the Marazuela Clinic back in Talavera de la Reina revealed no breakages, although his fingers were kept immobilized to try and aid the recovery process.

What is it with our Talaverans and their preseason testing injuries?!?! 😉

Anyway, very best wishes to Juanjo for a speedy recovery ahead of the season start, and we’ll aim to bring you news of his 2009 race schedule – and of his results as they come through to us.
You can also keep track of his career over at his (Spanish language) website at Juanjo29.com