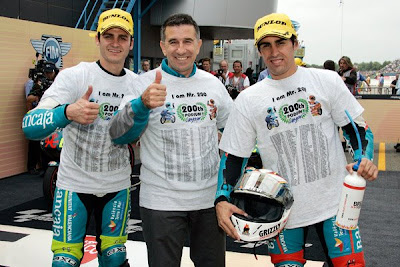 The year is 1992, the circuit is Interlagos in Sao Paulo, Brazil. A rain-hit qualifying session sees Jorge Martínez “Aspar” start from 25th position on the grid. The signs were not good for the man from Alzira until the green light was shown and from that point things could not have gone better as he passed rider after rider until finishing second behind the German Dirk Raudies, who celebrated his first Grand Prix victory. It was a second place that began a new era of success for the Aspar Team and a new chapter of history in motorcycling legend. The fourth World Champion did not take long to score his first victory as rider and manager of his own team. It came later that season at the Kyalami circuit after a hard-fought group battle with Raudies, Gresini and Giró. Looking back it feels like only yesterday that Jorge Martínez “Aspar” made that transition from rider to rider-manager and a whole new success story was born.

The Spaniard exuded the same passion for racing as a manager that he did as a rider and it wasn’t long before the Aspar Team established its reputation as a popular and credible team on the world stage, with more podiums and victories soon to follow that early success. In 1997 the moment finally arrived for Jorge to hang up his leathers but not before signing off in style in Indonesia, where he started from pole position and finished on the podium in third place after a hard-fought battle with Valentino Rossi. Having swapped his race bike for an office chair, Aspar was able to look on and enjoy as his podium standards were maintained by Aspar Team riders. The tradition which started eighteen years ago has continued to this very day, when Gadea´s victory took the team to a sensational 200th podium in the 125cc race at Assen, with another podium treble for the three Bancaja riders. Almost two decades of comings and goings, the smell of fuel and burnt rubber, celebrations and laps of honour, of national anthems, of holding back the tears. of podiums. The list goes on, but suffice to say these are just a handful of the experiences shared by the team over the years. Who could forget the sight of Fonsi Nieto in 2002, stricken on the wet asphalt of the Estoril circuit, down but not out as he remounted to take an unthinkable victory? Or the pass by Toni Elías on Marco Melandri to take victory in the final corner at Motegi in 2003? It also would be rude not to mention the fourteen podiums scored by Álvaro Bautista in 2006, the icing on the cake coming with the celebration of the 125cc World Championship title in Australia. In fact the 2006 season was the most successful on record for the Aspar Team, with 41 podiums in all classes and historic rostrum trebles in the 125 races at Istanbul Park and Montmeló. Aspar riders dominated the series again in 2007, with another podium treble at Valencia and another world title in front of the team’s home fans. Italian, French, Argentinean, English, Hungarian, Japanese and of course Spanish riders have all contributed to make the Aspar Team the most successful line-up in the smaller categories of the World Championship.

Jorge Martínez “Aspar”:
“For me it is very fitting to celebrate our 200th podium here at Assen because this is where I scored my first Grand Prix win, back in 1984. It is now 30 years since I began my racing career. Who would have thought that that little 15-year-old, who only wanted to race bikes, would be here today enjoying such a special moment? It is a double satisfaction, firstly for the 200 podiums but also to have seen the variety of riders that have passed through our team, from so many different countries – it is a wonderfully enriching experience. I would like to personally thank each and every one of those riders who have left their mark on this team, all the mechanics, staff and of course sponsors who over the years have given us the necessary backing to support this Project.”