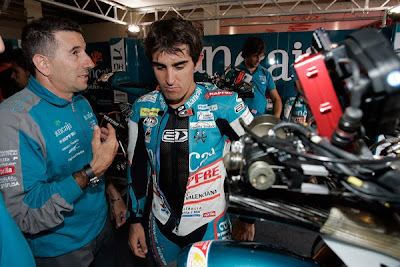 You make a point of thanking your team at every Grand Prix. Where did this good relationship start?
To be honest I have always had a good relationship with my mechanics, at every team I’ve been in. Nobody gets anything for free and it has been a long hard road for me to get to where I am today, so I think it is right to appreciate the work being done by the mechanics to help me. I had the opportunity to join the Aspar Team a while ago but in the end the deal wasn’t done, so when I knew I was going to be racing with them this season it felt like a dream had come true. I knew that in such a top team I would have the opportunity to show my full potential. We hit it off straight away – my chief mechanic Enrique Peris and the rest of the team were all extremely nice to me and it made things easy. The fact the results came so quickly brought us together even more and made us realise that we could achieve great things together.

What is your working relationship with the team like?
Very easy going, in fact this is one of the most enjoyable seasons I’ve ever had. I arrive at a circuit on a Thursday feeling relaxed because I know that the whole team is as focused as I am on making sure everything goes well from the first session. I am always really calm because I know everybody is behind me and when I go out on track the bike is going to be performing to its limit. If it isn’t, it doesn’t take us long to sort it out.

What is the team’s biggest strength?
Just the calmness they instil in me and the confidence they have in me. They know perfectly well that with the attitude we’re showing at the moment we can be competitive. The consistency also gives us the confidence necessary to run up front in every race.

What is your view on the season so far and where it goes from here?
From my side I think we have met all the objectives we set ourselves. The change in category was a risk for me and there we had our doubts, but thanks to my manager and the Aspar Team I am fighting to win at every Grand Prix. I adapted quickly to the Aprilia RSA, went fast on it from the first day and I think as far as the first half of the championship is concerned it is mission accomplished because we are leading the standings by fifty points. The second half of the seasons could be more difficult because of the circuits we have to race at and the tiredness that always kicks in. The circuits we have left are all good fun but also quite tricky. I suppose every rider would like to be going into them in my position and I usually go well in the second half of the season, so hopefully we can keep that tradition up.

Were you able to take a holiday or were you eager not to break your concentration?
To be honest I did relax a little bit. I usually find it difficult to switch off and I’m not the sort of person that can get up in the morning and not do anything but I have taken the odd day off over the past couple of weeks. I spent three days doing the tourist thing in London after Donington and just disconnected from racing. I have kept my training up though because it is important to be in the right shape for this second half of the season. It was nice to be at home for a while and spend time with family and friends.

Sachsenring, Donington. they say things come in threes. Do you think victory is a possibility again at Brno?
Yes of course and we’ll be working very hard to achieve it. I will try not to fall into the trap of going for victory at all cost because I learnt a lot from my mistake at Jerez and I don’t want to do it again. Brno is a circuit I have struggled at in the past but with the confidence we have this year and the good job we’re doing, I’m sure we will start Sunday’s race with every chance of fighting for the win.

What are your favourite circuits from now to the end of the season?
Apart from Brno, where I have usually struggled a little, I like them all – especially Estoril, Philip Island and Sepang because they are all set in stunning locations. To see a circuit surrounded by the ocean in Australia is incredible and the atmosphere is always great there too.

Have you started dreaming about winning the title yet?
Obviously, although I suppose that is normal with seven races left and a fifty-point advantage. My objective is to win the title and I want to keep dreaming – I never want the dream to end. One thing I am clear about though is that there’s a long way to go in the championship and I have to keep working to the limit if I want to be crowned World Champion. We want to finish the job off as soon as possible but there’s no rush. I have the team, the bike and the ability. all the weaponry I need so I just have to stay calm, focus on my job and see what happens.