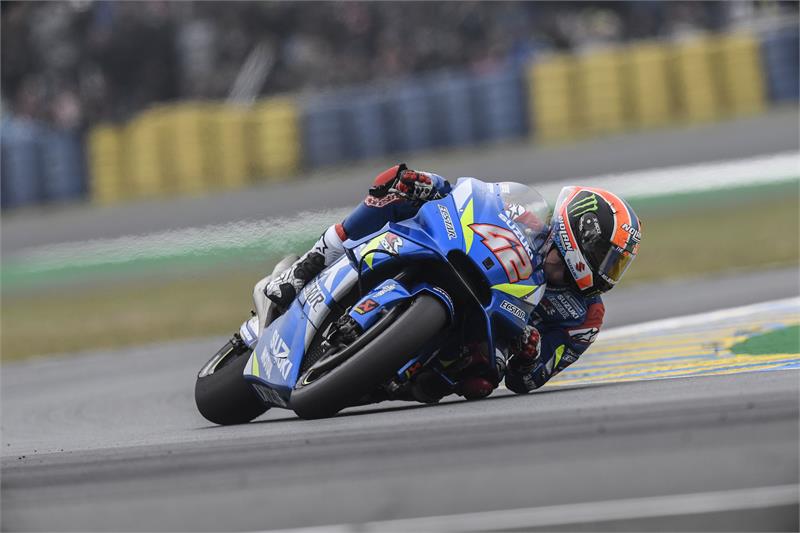 A tumultuous weekend for Team SUZUKI ECSTAR in France saw Joan Mir struggle against conditions and crashes, while Alex Rins had to fight hard to try and defend his championship position.

A chilly but dry Le Mans circuit greeted the riders for the 5th round of the season, but there was drama before the lights went out as Joan Mir fell victim to a crash on the warm-up lap, the youngster lost the front following a crash from Abraham in front of him. Mir returned to the pits quickly and was able to start the GP with his second bike from pit lane, after the rest of the field had left the start line.

A disappointing conclusion for Joan, finishing 16th, he had been gaining useful information and experience throughout the weekend with his GSX-RR on this technical track in the wet.

On the other hand, Rins was able to limit the damage of his 19th place qualifying position. The Spaniard had a steady start to the 27-lap race, but he chipped away and maintained his focus. After passing some riders he settled into a strong and defensive rhythm and he crossed the line in 10th place. He slips to 3rd in the championship but feels confident coming into Round 6 in Mugello.

Alex Rins
“It was a difficult weekend, qualifying went badly with the strategy and everything. Honestly, I was hoping for more out of this weekend. I started today’s race feeling very hopeful but in the end I had to manage some struggles, especially in corner entry and I could only manage 10th place. Those six points are important, especially as it was easy to crash today – we saw many crashes in all three races. There are still a lot of rounds to go, I’m ready for Mugello.”

Joan Mir
“What happened on the warm-up lap was a shame. I think the tyre was cold, I didn’t brake too hard or too early, but I lost the front. I crashed four times this weekend and we have to look into why that happened. I don’t feel that I over-pushed at any time, but when I can figure out why I crashed I can hopefully learn something from it. I’ll look forward to the Italian GP which is coming next.”