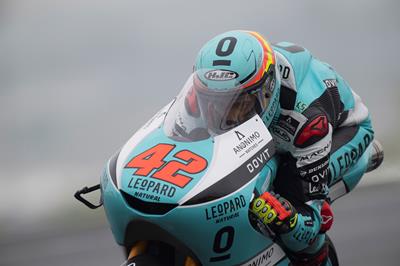 Leopard rider Marcos Ramirez, who had a very decent pace throughout the weekend, crashed at the first stages of the race.

We started the Grand Prix of France saying that everything could be possible this weekend. Weather conditions, riders performance, rivals, track surface. A mix of variants that never seemed to be in tune. Ramirez started from 6th position, managed his pace and when he was catching the front group, the Spaniard lost the front end and ended up in the gravel.

In terms of teams, Leopard Racing is now the second with 84, just 5 far from the first one.
As we’ve been saying… Everything is possible.

See you all at the amazing track of Mugello the 2nd of June.

“I’m quite sad after this result. I’m so sorry for the team because we’ve worked so hard this weekend and I felt good on the bike. At the beginning of the race I struggled a little bit but then I found my pace. When getting to the turn 2, I had a little problem: while changing, I geared an extra one, so that jeopardized my race. It’s been a shame. I wanted to get a nice result but now I’m focused on reverting this situation in Mugello”.