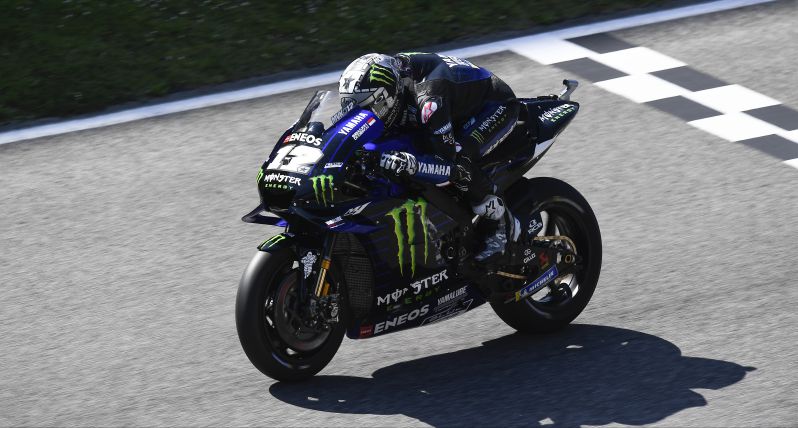 Starting from P7, Viñales lost a few positions in the tussle of entering the first corner and settled in twelfth position. After a few laps he gained two places and tucked in behind fellow Yamaha rider Fabio Quartararo, hoping to join the rider group of nine in front.

With relentless focus he reeled them in and tapped them on the back lying in ninth place when Francesco Bagnaia crashed out with 11 laps to go. But soon the group was pulled apart again. The Spaniard, however, used his experience and kept his head cool. Like he predicted yesterday, he managed the tyres and used his great physical fitness to bring a strong challenge to the riders ahead of him in the final stages.

With eight laps to go he gained a place as Jack Miller ended up in the gravel, which was the no.12 rider’s cue to start his late charge. Over the next two laps he overtook Quartararo and Crutchlow, moving up to sixth place. With an over 1s-gap to the rival in front of him, the Yamaha man pushed to the max but was unable to inch close enough. He finished sixth, 7.481s from first.

Viñales‘ sixth place result moves him up from tenth to eighth in the rankings, with a 75-point margin to the top. Yamaha is now fourth in the constructor standings, whilst Monster Energy Yamaha MotoGP continues to hold third in the team classification.

The team will be back on the track in two weeks‘ time for the Gran Premi Monster Energy de Catalunya, held at the Circuit de Barcelona-Catalunya.

“Today I struggled a lot. I had no feeling with the bike during the race and the tyres were very slippery. I tried to push in the correct way and manage the tyres in the best way I could, but anyway it wasn’t enough. I don’t think we should be on the level of getting sixth places, we need to push more. I really don’t know what to expect for Montmeló. For sure, during the practices we can be there, but in the race it’s a different story. Our bike suffers a lot when we don’t have grip. So, we need to keep working to see if we can improve the feeling and take steps forward.”