Marcos Ramirez not classified in Mugello 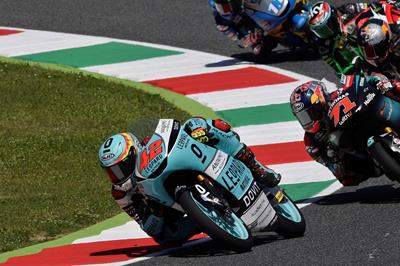 Spanish rider Ramirez has had to withdraw after having some problems with the bike.

We didn’t know which was going to be the end of the Italian film and it’s fair to say Leopard Racing’s had a happy ending (on one side). The Spaniard and the Italian have had very good feelings throughout the weekend despite Dalla Porta suffered a crash on Friday. Both did a very decent qualifying session, have had strong pace and were ready to fight. When it came to crunch, Ramirez didn’t do a bad start, but saw himself relegated to the back of the second group. However, even if he tried, Ramirez started to lose many positions. At the end, the rider had to enter to the pits and couldn’t finish the race due to a mechanical problem.

Marcos Ramirez is now the 16th (24 points) as he hasn’t been able to gather points today.

“I started with a lot of motivation and I wanted to do a good race. But then, as the laps went by I started to lose some positions, the bike didn’t react as previously. We’ve had a mechanical problem and I had to withdraw. I feel quite frustrated because this is the 3rd N/C in a row and of course I can’t be pleased with that, so I’m disappointed. We will try to do it better in Montmelo, the only thing we need to do is to keep working as we’ve done so far. Let’s hope for a little bit of luck in the next race”