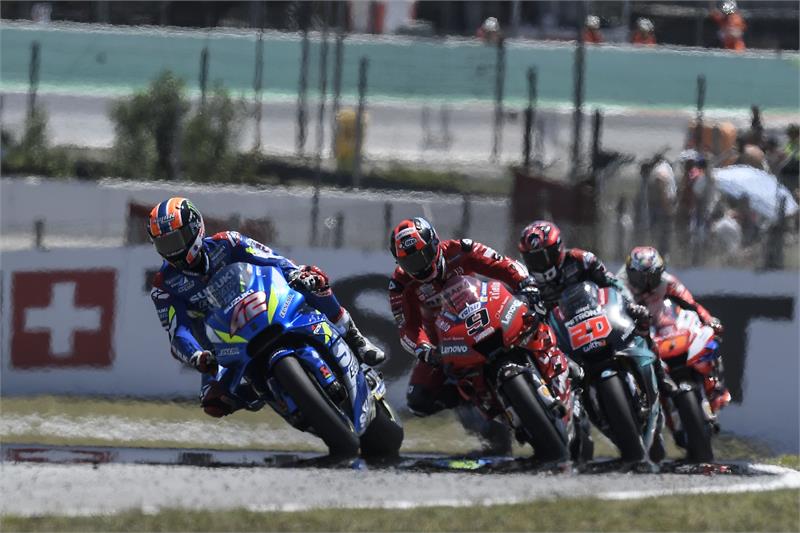 The classic Catalan circuit of Montmelò was packed full of enthusiastic fans for the seventh round of the 2019 MotoGP World Championship, on the 70th Anniversary weekend of the series. There was an incredibly high attrition rate during the race, with 11 riders failing to finish.

Team SUZUKI ECSTAR’s riders felt confident heading into the 24-lap race, and both Alex Rins and Joan Mir were able to make strong starts from their 3rd and 4th row grid spots. The first lap saw huge drama with a 4-rider collision between the front runners, and this promoted Alex into 3rd place.

As soon as the Spaniard slotted into this position he showed his determination and pace, fighting hard behind Petrucci to make his way into 2nd place. Joan Mir also benefitted from the first lap commotion, and the rookie found himself in a strong 6th place. Staying close to the battle in front of him, he was finally able to showcase his improved feeling with the GSX-RR and his very respectable race pace. This 6th place marks a best ever MotoGP result for the youngster.

Whilst embroiled in the battle for 2nd place, Rins attempted a pass on Petrucci into Turn 1 but was forced to sit up to avoid hitting the Italian, this unsettled his bike and he made a very impressive save to stay on the track. Following this frightening moment Alex slipped back to 6th, but he kept his focus and pushed on to take a very important 4th place and 13 points.

Alex Rins
“I’m a little bit disappointed with my result because I felt I could have a really good result this weekend – but on the other hand, considering I had some problems during the race, it’s not a bad result. It was a complicated and difficult race and it was a shame to see the crash between Lorenzo and the others, especially as it gave Marquez even more of an advantage. The track was very hot, which made it hard on the tyres and I struggled with feeling, especially in the right-hand turns. Ideally I would have got a better start and gone with Marc, but in the end it wasn’t possible. Anyway, I’m quite pleased to have finished 4th despite my struggles.”

Joan Mir
“It was a difficult race because the track temperature was so high. On the first few laps I tried to conserve the tyres and manage my race well. I hope to continue my season like this, finishing races and building my experience and confidence. This is the second strong race for me after Qatar and I’m really glad to have been able to get a good result. Tomorrow I’ll work with the bike in the test and continue to learn.”