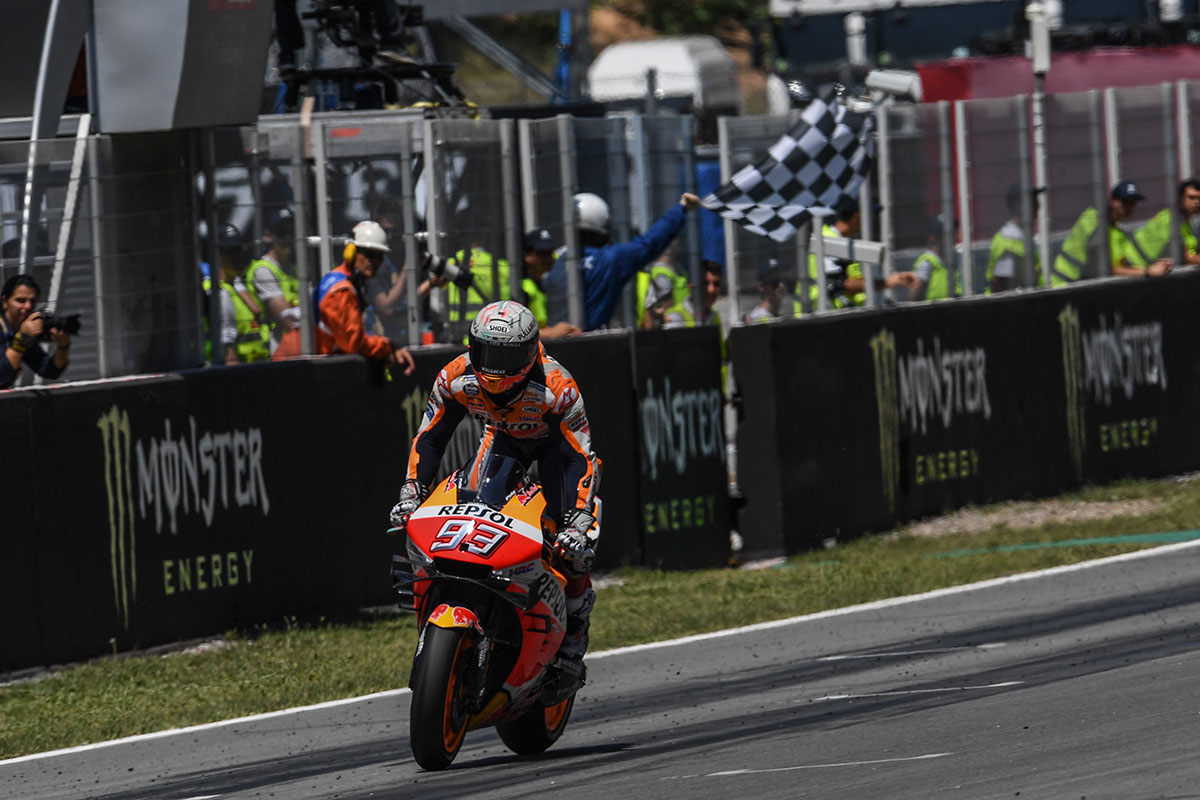 Marc Marquez (Repsol Honda Team) took an impressive win in the Gran Premi Monster Energy de Catalunya on an expensive day for his key Championship rivals, with a dramatic multiple-rider crash near the start of the race creating some serious chaos. Marquez escaped that and in the aftermath it was Fabio Quartararo (Petronas Yamaha SRT) who emerged as his closest challenger, with the polesitter and French rookie cutting down the gap in the latter laps as he seared away from those on the chase. His second place makes him the second-youngest podium finisher in the MotoGP™ era, behind only Marquez, and he managed to pull two seconds clear of Mugello winner Danilo Petrucci (Mission Winnow Ducati) to do it.

It was Andrea Dovizioso (Mission Winnow Ducati) who took the holeshot with another stunning start, this time from the second row, with Marquez pushed back into second and Quartararo then trying to send it around the outside of the reigning Champion. But he couldn’t quite make that stick and Maverick Viñales (Monster Energy Yamaha MotoGP) capitalised to sweep through soon after. The number 12 then attacked Marquez to take over in second, with Jorge Lorenzo (Repsol Honda Team) making some serious ground up into fourth to fight for the podium.

Marquez hit back against Viñales on Lap 2 and it was shaping up to be a serious fight at the front, but that’s when the drama hit. Lorenzo went to attack Viñales just as Marquez attacked Dovizioso, and the number 99 then lost the front as the space ahead diminished. That set off a huge incident as the number 99 took down Dovizioso, then Viñales, and then Valentino Rossi (Monster Energy Yamaha MotoGP) got caught too – with all four out the race. Marquez was clear of it, with Petrucci the man left in second, escaping the drama after having been passed by Rossi at the best time for one of them and the worst for the other.

Marquez was then able to pull the pin and extend the gap but the fight behind was on fire: Petrucci vs Alex Rins (Team Suzuki Ecstar) vs Quartararo. First it was a duel behind the Italian before Rins then started looking for a way past Petrucci, attacking into Turn 1 and the Ducati defending to perfection in Turn 2. A couple of laps later it was a Rins and repeat, but the Suzuki man couldn’t make it stick.

He kept trying, but the next attempt was more costly. Running on and left heading over the Long Lap Penalty after dropping anchor to avoid Petrucci in Turn 1, the number 42 lost out and rejoined in sixth, behind his rookie teammate Joan Mir. That left him fighting to try and get back through, and left Quartararo with only one man in between himself and Marquez’ trail.

It didn’t take long; the Frenchman sliding up the inside of the Ducati to take over in second soon after. And then, he was in the same position as his fateful race in Jerez and wishing for more luck. Barcelona brought just that, with the number 20 then able to unleash his pace and push on after Marquez, immediately starting to cut the gap.

In the end, there weren’t enough laps left for a charge at the win, but the Frenchman made a little history regardless and a first rostrum finish is good payback for his incredible pace so far. Petrucci was around two seconds behind him but scored big for Ducati once again, with Rins taking fourth after managing to pass first Mir and then Jack Miller (Pramac Racing).

Miller was only two tenths behind him over the line, however, and the Australian’s P5 puts him back in the lead of the Independent Team standings. Behind them? Another small gap back to Joan Mir, who took sixth and his best rookie result yet, two better than his season opening P8 in Qatar.

Alex Marquez (EG 0,0 Marc VDS) took a third magnificent win in a row in the Gran Premi Monster Energy de Catalunya, moving through from sixth on the grid to unleash his pace at the front and pull clear in another dominant performance. It’s the first time the number 73 has ever taken three successive victories and after a crash in Barcelona for former points leader Lorenzo Baldassarri (Flexbox HP 40) as well, Marquez now heads the standings by seven points. The man trailing him is Tom Lüthi (Dynavolt Intact GP), who took another podium and valuable 20 points to move back into second in the Championship, with Jorge Navarro (HDR Heidrun Speed Up) back on the podium in third.

Lüthi took the holeshot as the veteran screamed away from the line, with Marquez almost running into trouble in the early stages and remaining sixth. Enea Bastianini (Italtrans Racing Team), Fabio Di Giannanontio (HDR Heidrun Speed Up), Sam Lowes (Federal Oil Gresini Moto2), polesitter Augusto Fernandez (Flexbox HP 40) and Lüthi were the men in between him and the lead, and in the first few laps at least, Lüthi and Fernandez were pushing hard to make a gap at the front.

First the number 73 took Bastianini, then Di Giannantonio, and then Lowes as ‘Diggia’ followed him through as well. Next up was the task of cutting down the gap to the front, and the 2014 Moto3™ Champion set about doing that. Fernandez then attacked Lüthi for the lead, and that brought Marquez right into play in the front trio.

Lüthi took it back soon as he attacked into Turn 1 and the three stayed close, but it wasn’t long after that that drama hit further back as Baldassarri binned it at Turn 10, making the fight for the win the fight for the Championship lead. Lüthi tried to pull away, but Marquez then saw the Swiss rider struggling and made his move.

Once past, the Spaniard wasn’t able to immediately pull away but little by little he was able to extend the gap and make it his race to lose. Pitch perfect from then on, Marquez made zero mistakes and heads home with a seven point lead. Lüthi was his trademark consistent self to take 20 more points and move back into second overall, staying out the clutches of Navarro.

After a tougher round at Mugello, Speed Up rider Navarro was back on top form in Catalunya, unleashing more of his now-trademark late race pace as he was able to get past Fernandez. But the polesitter nevertheless impressed with his P4, making a good dent in the frontrunners once again.

Marcos Ramirez (Leopard Racing) made sure more history was made in the Gran Premi Monster Energy de Catalunya, with the Spaniard escaping from a dramatic and chaotic fight to win his first race and make it 12 different winners in a row. It’s also therefore seven different winners in a row this season, and the first time that’s ever happened in the first seven races of the lightweight class. Aron Canet (Sterilgarda Max Racing Team) took a valuable second place to extend his Championship lead, with impressive rookie Celestino Vietti (Sky Racing Team VR46) taking some tips from the boss to secure third with a stunning, Rossi-esque final corner move.

Tony Arbolino (VNE Snipers) took the holeshot from third on the grid, but fast-starting Canet shot through from fifth on the grid to attack quickly for the lead – and Lorenzo Dalla Porta (Leopard Racing) soon followed suit. Polesitter Gabriel Rodrigo (Kömmerling Gresini Moto3) dropped to seventh as the field shuffled through the first lap, and the first man to lose out in what would go on to be a race of attrition was Tatsuki Suzuki (SIC58 Squadra Corse) as the Japanese rider went down early.

The race was a classic Moto3™ melee, but in the early stages it was Dalla Porta in charge at the front of the big group. The Italian looked like a serious threat until heartbreak suddenly hit with 18 laps to go as the number 48 suffered a mechanical problem around Turn 13, forced to pull off and losing some serious ground in the Championship.

Marcos Ramirez was the new man in the lead, but there was more drama just around the corner. Can Öncü (Red Bull KTM Ajo) triggered a multiple-rider incident at Turn 4, with Albert Arenas (Sama Qatar Angel Nieto Team), teammate Raul Fernandez, Sergio Garcia (Estrella Galicia 0,0), Vicente Perez (Reale Avintia Arizona 77) and Filip Salac (Redox Pruestel GP) all caught up in it and out of the race.

There had been a group of seven riders in the lead group with 15 laps to go, but the group got bigger over the next few laps until the top 15 were back in a freight train. And it soon lost another member, with Arbolino, incredibly, also suffering a mechanical problem and the Mugello winner dropping back and then heading back into pitlane. The top 18 were within an awesome 2.7 seconds as the last laps appeared on the horizon, but there was more drama to come. Next it was Jaume Masia (Bester Capital Dubai) crashing out with eight laps to go, and then it was polesitter Rodrigo a few laps later – with Darryn Binder (CIP – Green Power) going down with him.

That left Kaito Toba (Honda Team Asia) leading the battle for supremacy, with the Qatar GP winner having put in a stunner to slice through the chaos from P24 on the grid. He managed to stay there too, and was the man with the target on his back heading onto the last lap. Canet and Lopez made for close company however, and as Canet then went for a move to attack at Turn 10, Toba suddenly slid out in another bout of heartbreaking drama.

Canet went a little wide, Lopez did the same, and Ramirez took his opportunity almost immediately. Cutting past into the lead, the Spaniard just had a few corners to go to win his first ever Grand Prix. Into the final corner though it looked like Canet was going to try and recreate the famous Valentino Rossi move from a decade ago, but he thought better of it and slotted back in behind Ramirez. Just behind them, however, Vietti went for it.

As Ramirez blasted clear of Canet towards his first win, the Sky Racing Team VR46 rider just behind them kept it pinned on the inside and managed to pull it off with serious style, taking his third podium and second of the season…from 21st on the grid!

Niccolo Antonelli (SIC58 Squadra Corse) scored some valuable points in P11 after starting near the back following a penalty, and the Italian had even fought for the lead before running wide with a few laps to go. Wildcard Carlos Tatay (Fundacion Andreas Perez 77) took points in P12, just ahead of John McPhee (Petronas Sprinta Racing).

The Scot fought at the front throughout and in the podium battle until Turn 10 on the final lap, when he suffered a highside…and then a miracle save. Somehow staying on, it was an incredible sight and feat. Tom Booth-Amos (CIP – Green Power) scored his first points in P14, ahead of teammate Darryn Binder after the South African rejoined.

A true melee in stunning Moto3™ style, the chaos of the Catalan GP leaves Canet a valuable 23 points clear at the top of the standings heading into Assen. Will the Spaniard pull off more top tactics there? Find out in two weeks.