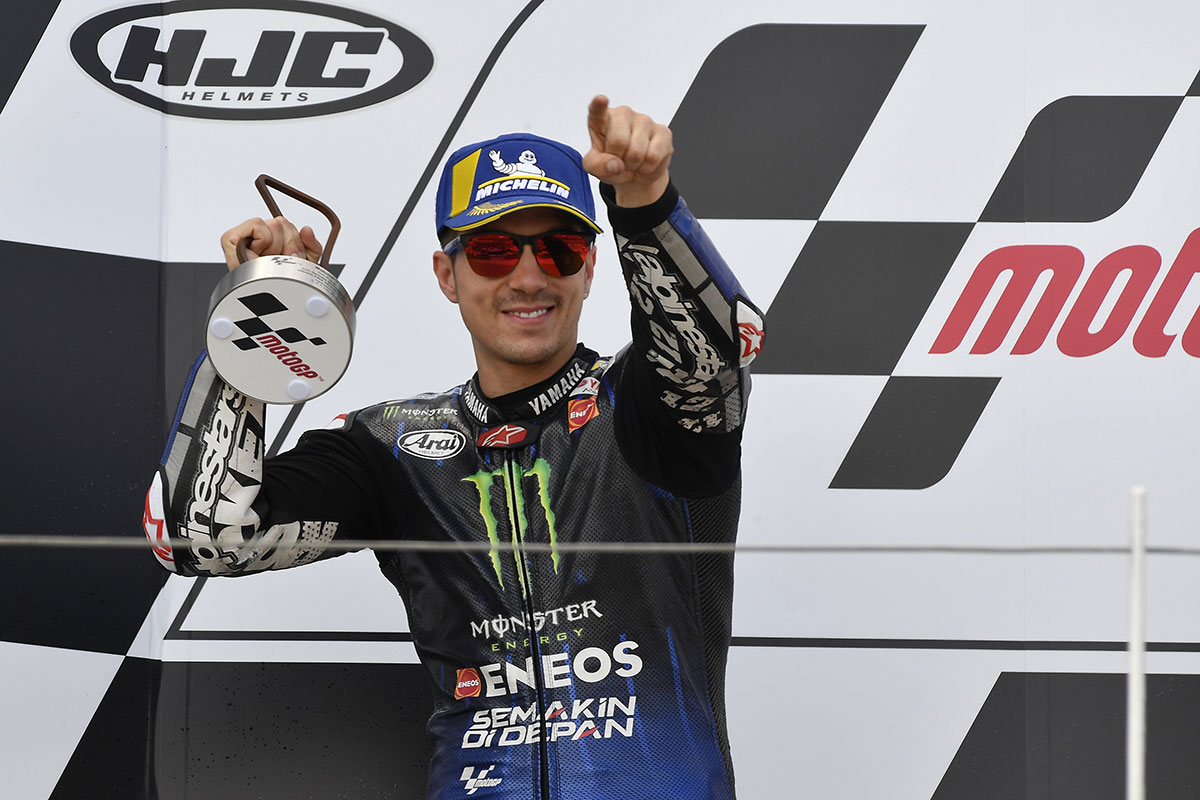 Monster Energy Yamaha MotoGP’s Maverick Viñales showed his mental strength at the Motorrad Grand Prix Deutschland today. He had Cal Crutchlow breathing down his neck for half of the race, trying to steal second place from him, but the Spaniard held firm, taking his second consecutive podium.

Viñales had a good start from third and slotted into second in the first corner. He was going all out in the early laps, as he didn‘t want to let Marc Marquez out of his sight, but tyre management was also crucial. When Álex Rins passed the Yamaha rider on lap four, the latter cleverly stuck to his rival but did not make a move, to ensure the pair of them wouldn‘t lose any valuable time.

However, the number-12 rider was unable to keep up with the low 1‘21s-lap pace and soon needed to shift his attention to keeping Crutchlow at bay. With Rins crashing out in lap 19, it turned into a battle for second. The Factory Yamaha man did a stellar job and, after withstanding the pressure for 15 laps, his superb concentration and consistency broke the Brit in the last lap. A small mistake from his rival finally gave Viñales some breathing space to bring his YZR-M1 over the finish line in second place, 4.587s from first.

Today’s second place means Viñales moves up to fifth in the championship standings with a 100-point gap to first, one position ahead of teammate Rossi, with a 105-point deficit. Yamaha remains third in the constructor standings, and Monster Energy Yamaha MotoGP also stays in third in the team classification.

MAVERICK VIÑALES
“We discovered quite early this weekend that second place might be the best we could do here, so with that in mind we achieved the objective. For us it’s really good, second is my best result here. I started well, I did a good first few laps. This result means a lot, it prepares me for Brno. I’m really happy, we understand the way to go. Yamaha is working in a good way, and I know our strong and weak points. It’s good that we have a summer break to improve the bike and improve myself. The tyre choice was very difficult, I took a gamble with the hard because I worked most of the time with this tyre. It was on the limit if I could or could not finish the race, and I said to myself ‘If I need to slow down in the last ten laps, I will, but I will be at the front’. I’m very pleased for Yamaha, it’s very important to get a consecutive first and second place. I saw Cal on my pit board the whole time and for about fifteen laps I closed every door. I worked very hard on making sure he couldn’t overtake me, because I knew if he did, he would go. Luckily I was second, so I’m very pleased and happy. I can’t wait for Brno to try out the new things and see if we take a step.”