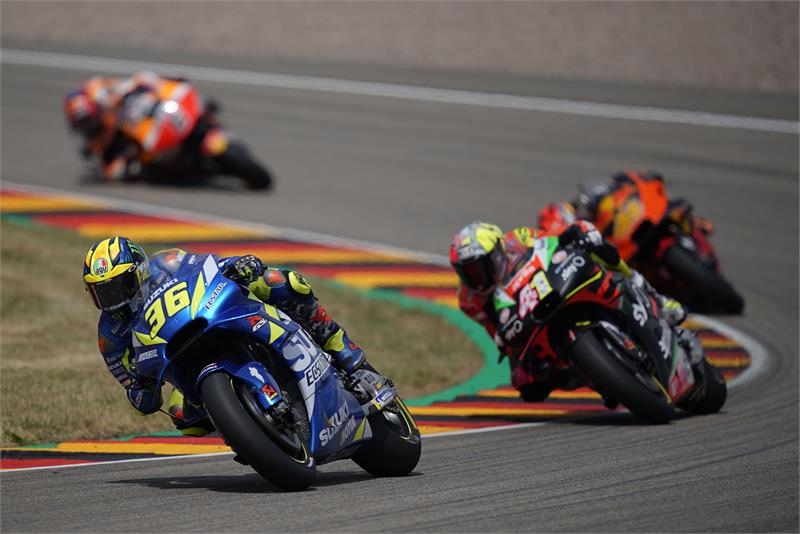 The German GP, the final round before this year’s summer break, brought a tough race for Team SUZUKI ECSTAR following a very promising Friday and Saturday.

Both riders chose the medium-hard tyre combination for the demanding 30 lap race, and both got away from the line in good shape. Rins quickly slotted into the lead group with 4th place, while Mir placed himself in a pacy 10th.

As Marquez began to pull away at the front, Rins wasted no time in making his move into 2nd place, setting the fastest lap, and aiming to keep his rival as close as possible. Alex then settled into a strong rhythm to hold a ‘safe’ second position for a large portion of the race. Unfortunately, with 11 laps to go, Alex suffered a quick crash and was unable to rejoin the race. Luckily he did not pick up any injuries.

MotoGP rookie, Joan Mir, was feeling comfortable in his fast and experienced second group. A small mistake set him back for a couple of laps, but he was ready to fight again towards the end of the race. Mir had 4th place in his sights as he battled with the three Ducatis ahead of him, and he held 5th place for a number of laps. However, as the chequered flag flew, he had dropped to a respectable 7th place.

Coming into the summer break, Rins holds 4th place in the championship standings with 101 points. Mir is 13th with 39 points.

Joan Mir:
“It was really nice to fight for top positions in a quick group, but I made some mistakes and I had to recover some places, which cost me a bit. Anyway, I’m happy with my performance and my pace, it was difficult to pass the other riders in front of me, but I gave it my best shot and I could bring home seventh. Now it’s time for a little break with my family, and then I’ll start preparing for part two!”

Alex Rins:
“I lost a podium today. My feeling with the bike was really nice and I tried to get into second place as soon as possible because I felt that my rhythm was strong. Unfortunately, I lost the front on a fast right-hander, I entered into it just a couple of kilometres per hour faster than usual, and that’s why I crashed. It’s a shame because it’s my second DNF in a row, but I still feel positive because my pace has been good recently and I know I can get good results again when we come back after the break.”