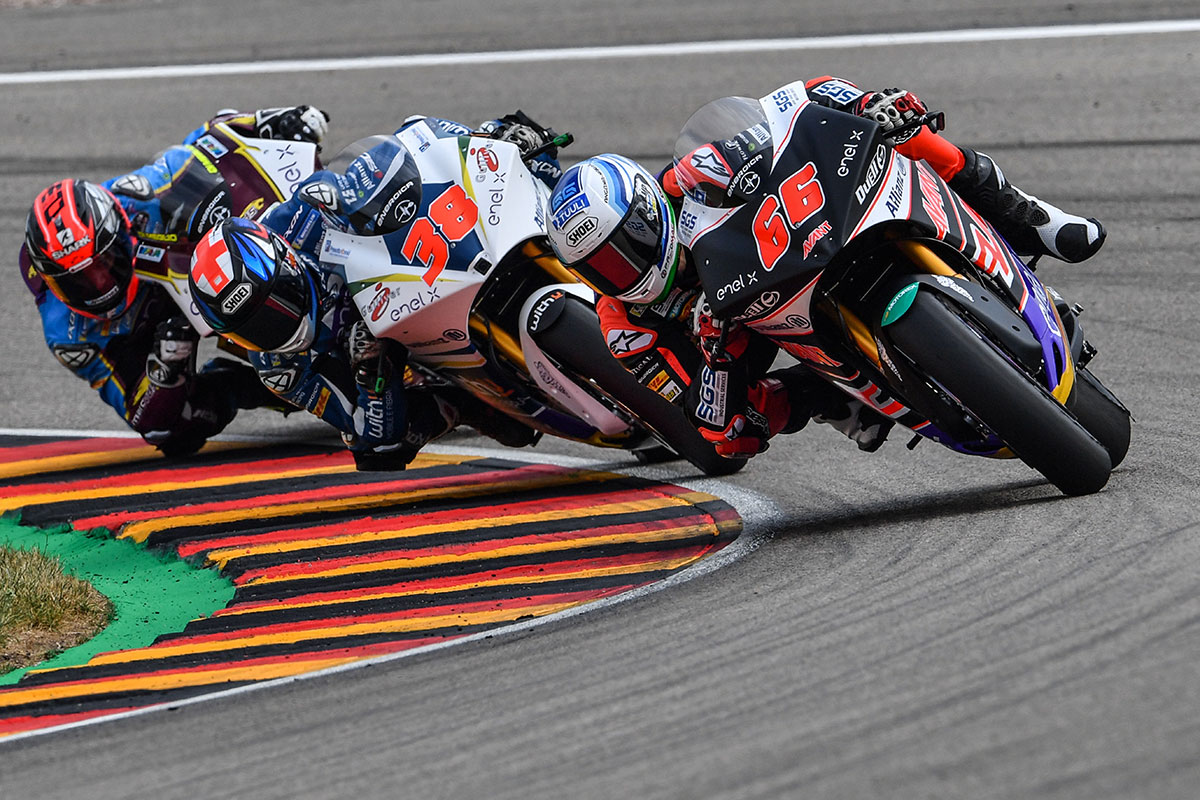 Niki Tuuli (Ajo MotoE) has taken the first ever win in the FIM Enel MotoE™ World Cup, converting the first E-Pole into victory as the Cup kicked off in style in Germany. A Red Flag on the penultimate lap brought the race to an early end but it was a stunning spectacle throughout, with Bradley Smith (One Energy Racing) taking second and Mike Di Meglio (EG 0,0 Marc VDS) completing the podium.

It was Hector Garzo (Tech 3 E-Racing) who took the holeshot from second on the grid, with Smith up to his old MotoGP™ class tricks to get a stunning launch from P7 and move into second, round the outside of polesitter Tuuli. Garzo then headed wide and Smith took over in the lead, with Tuuli also a little off line and that letting Di Meglio through into third. Xavier Simeon (Avintia Esponsorama Racing) then picked the pocket of the Finn too, and the polesitter was down into fifth.

He soon set about hitting back, however, slicing through into fourth and then third as Di Meglio attacked Smith at the front, taking the lead. The trio were pulling away to make the fight for the podium a three-way affair, leaving Garzo battling Matteo Ferrari (Trentino Gresini MotoE) for fourth and Alex de Angelis (Octo Pramac MotoE) defending from Simeon.

With six to go, Smith struck back for the lead and it wasn’t long until Tuuli moved through too, tagged onto the back wheel of the Brit and recovery from a tougher first couple of laps almost complete. A lap later he made a move but Smith took him back at the final corner, and the two blasted down the start-finish straight in tandem.

Tuuli set it up and attacked again into Turn 1, the Finnish rider back in charge and slowly but surely able to get just enough breathing space to stay out the clutches of Smith. Meanwhile, just behind, Garzo had managed to tag onto the battle for second. But drama then hit slightly further back as Eric Granado (Avintia Esponsorama Racing) came together with Lorenzo Savadori and the Italian went down, and ultimately that would decide the race.

Savadori was up and ok, but the air fence took a hit from the bike and that meant the Red Flag came out, cutting the race short. With the standings based on the last lap over the line, that made Niki Tuuli the history-making first ever winner in the FIM Enel MotoE™ World Cup.

Bradley Smith took second ahead of Di Meglio, with the Frenchman having only just attacked him for P2 but that now null and void. Garzo was forced to settle for fourth, with Ferrari completing the top five.

That’s it from the inaugural weekend for the FIM Enel MotoE™ World Cup, with Tuuli the first ever winner and therefore our first Championship leader. How will Austria shake it up? The Sachsenring is about corners, and the Red Bull Ring is much more stop-and-go. Tune in on the 11th August for Round 2!

Niki Tuuli:
“I’m really happy, already after the first test we knew the bike was going to fit for me, but every time we’ve gone but we’ve been close to the top three and that’s the main thing, and especially here in the fast corners I’ve been really good and I think that’s where yesterday I made the laptime as well.
On Friday and Saturday we had good speed and I know the places where I’m quite a lot faster at the moment. In the race because the weather is quite difficult we didn’t know where were the wet patches on track and we made the bike softer. Then straightaway when we started the race and I hit the brakes at Turn 1 I hit the bottom and knew it was too soft. After that I tried to keep the riding quite soft for the first two laps and after that I tried to push a bit and find out where it was working or not. I made a couple of mistakes when I was pushing too much, but in the end I made a small gap. We have many thing to improve and unfortunately today we had a really short race. But in the end we were first all weekend so it’s a good start to the year!”