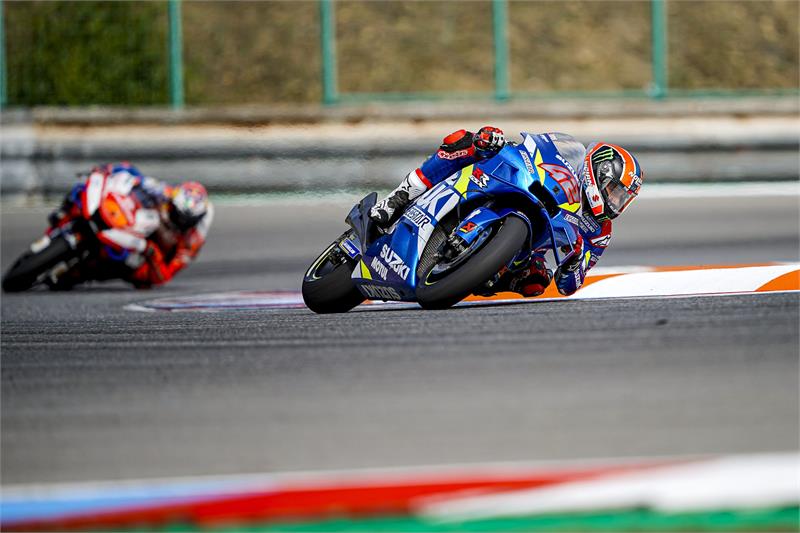 Race Direction made the important decision to delay the start to assess conditions, with the priority being rider safety. After a tense 40 minutes passed, the race began under the ‘quick start’ procedure.

Sadly, the Czech GP ended on Turn 4 of Lap 1 for a very unfortunate Joan Mir. The rookie was on the outside of an incident between another rider and Morbidelli and found himself barreled into the gravel as Morbidelli went down. Joan was very disappointed but luckily uninjured.

Meanwhile, Alex Rins got a great start from his 6th place grid spot, slotting into the lead group of four riders. The Spaniard proceeded to execute a precise and smooth pass on Miller for 3rd place, before setting the fastest lap of the race. Settling into a good rhythm, Alex held onto this podium spot until the final 2 laps of the race when he began to feel himself losing rear grip. Despite trying to fight to hold his position, he had to concede to Miller as a small moment cost him ground. With this 4th place finish, Alex collects useful points and closes the gap to Petrucci in the standings.

Alex Rins:
“I was really close to the podium, and it’s a bit of a shame because I was fighting hard all race and trying to close Dovizioso in front of me. But in the last five laps I felt that the grip had dropped, however, but I’m still pleased to get fourth place. Tomorrow we’re testing and we’ll try many things, this should allow me to go to Austria next week feeling fresh and ready to fight again in the top group.”

Joan Mir:
“I was on the outside of Morbidelli coming off the start and when he went down there was nothing I could do to avoid him. This type of incident is always an extra risk when you start towards the back of the grid, and it was a shame that my race ended there. I had a good feeling with my bike during the warm-up in the dry and I was disappointed not to discover how I could convert that pace in the race. But anyway, these things happen, let’s think about Austria next week!”