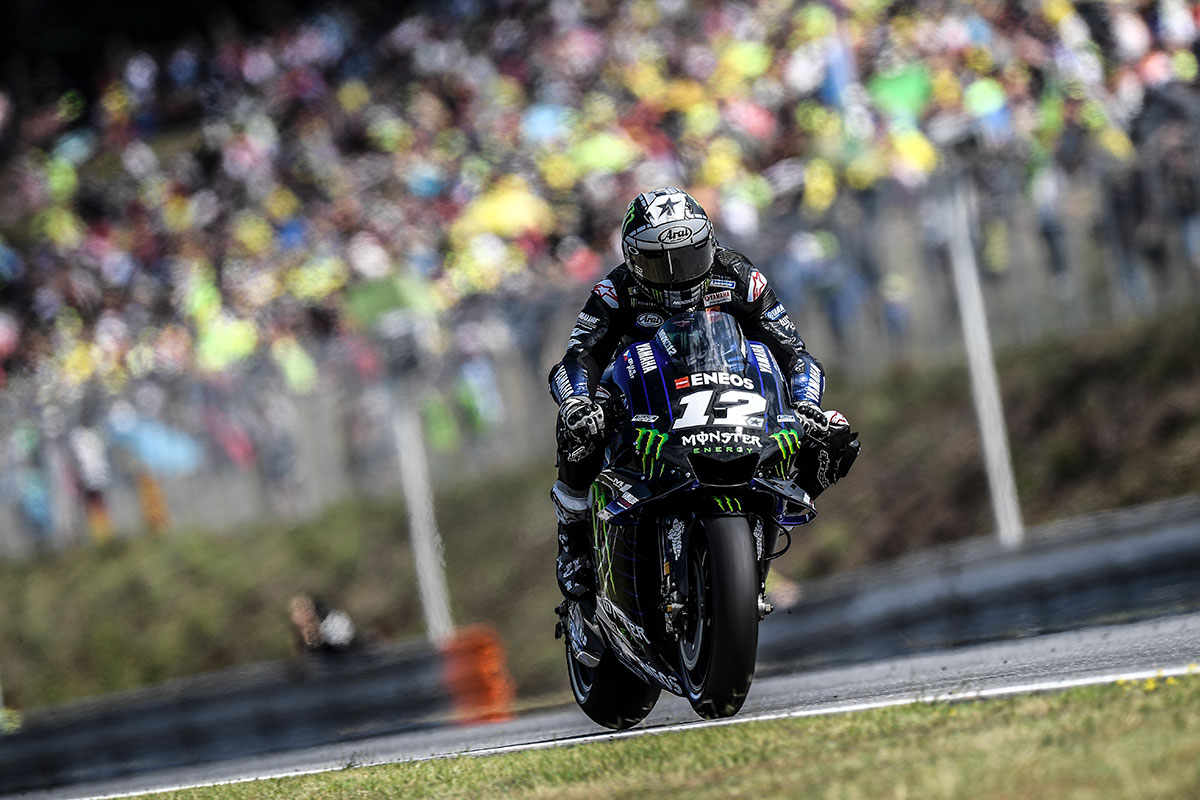 Monster Energy Yamaha MotoGP’s Maverick Viñales had difficulties finding his earlier form from the Monster Energy Grand Prix České republiky weekend during today’s mixed race. He lost some time at the start, but put his head down to ultimately take tenth place.

The race, originally scheduled for 14:00, was delayed and shortened by 1 lap due to track conditions, as the start-finish straight and the first sector were wet and slippery, whilst the rest of the track was dry.

Viñales didn‘t get the start he had hoped for as he launched from P9 on the damp side of the grid. He fell back several places and crossed the line for the first time in 15th. The Spaniard struggled to get a feel for the track conditions, but after five laps he was on the move. He climbed up to 13th place, and four laps later he scorched past Miguel Oliveira.

Next up, the number-12 rider closed a large gap to take 11th position from Francesco Bagnaia and was lapping significantly quicker than Pol Espargaró and Takaaki Nakagami battling for ninth in front of him. With five laps to go, Viñales was the fastest man on track. He observed his rivals and with two laps remaining he passed Espargaró pretty comfortably but didn’t have time enough to also threaten Nakagami’s position. The Yamaha man ended the race in tenth place, 16.558s from the front.

Today’s tenth place means Viñales holds on to fifth in the championship standings, one point ahead of teammate Rossi in sixth place and with a 119-point gap to first. Yamaha remains third in the constructor standings, and Monster Energy Yamaha MotoGP also stays in third place in the team classification.

The team will be back in action at the Automotodrom Brno tomorrow for the one-day Brno MotoGP Test.

MAVERICK VIÑALES
“I started on the damp part of the track and for sure that was a small disadvantage, but Álex started in front of me, on the same side of the grid, and he was OK. I think we lost a lot of grip compared to the morning, which is something we often struggle with, with our bike, so it’s something we have to improve. Tomorrow, during the test, I don’t want to start thinking about 2020 already, it’s too far ahead. I want to be in front in Austria, so this will be an important test to improve the bike for next weekend.”