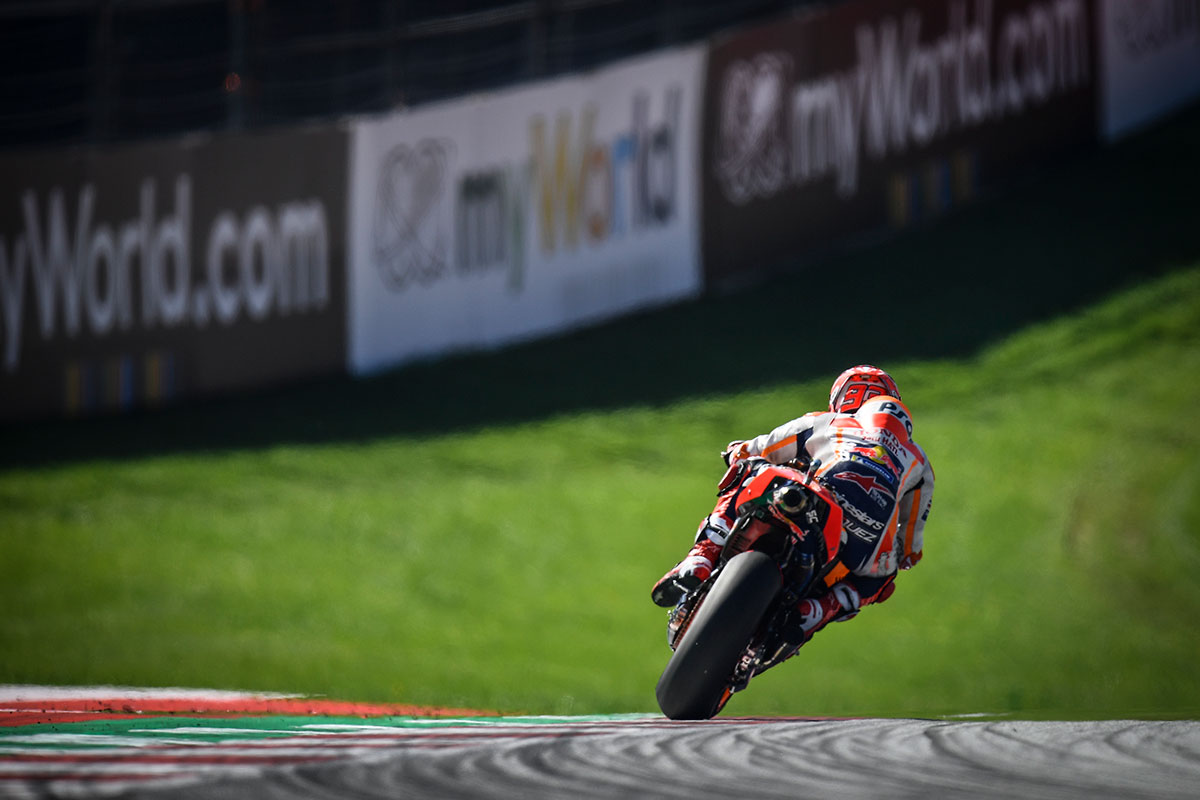 Maverick Viñales (Monster Energy Yamaha MotoGP) was the fastest rider after the first flying laps at the Red Bull Ring, with the Spaniard doing his first stint on the medium tyres and going four-tenths quicker than the field on his second fast lap as teammate Valentino Rossi (Monster Energy Yamaha MotoGP), Cal Crutchlow (LCR Honda Castrol) and Quartararo all fought it out for second position and Viñales’ advantage was chopped.

Then, however, Marquez started really taking the the bull by the horns. The reigning Champion has been the man to beat all weekend in Austria and soon enough, Marquez was back at the summit, 0.269 faster than Viñales’ to sit on provisional pole after the first set of flying laps.

Just seven tenths covered the top 12 as the riders came out on fresh rubber for their second stints, with Viñales switching to a soft rear tyre this time. And ‘Top Gun’ went quicker to cut Marquez’ advantage to 0.164 as Dovizioso then ramped up his pace to slot himself onto the provisional front row behind the two Spaniards. The red sectors, though, were lighting up and that was for one man: Marquez. The Spaniard had Doohan’s premier class pole record well in his sights, and he also had a 1:22 on his radar. When Marquez came round to complete his lap, a 1:23.027 making it the fastest we’ve ever seen around the Red Bull Ring…although not quite in the 1:22s.

The front row wasn’t quite decided there though. Dovizioso was able to improve his time to shoot 0.008 ahead of Viñales and on his final qualifying lap, but rookie sensation Quartararo beat the pair of them to stick his M1 on the front row for the sixth time in 2019. The Frenchman was overjoyed with another quality Saturday display, set to start between Marquez and Dovizioso on Sunday.

That puts Viñales at the head of Row 2 ahead of a stunner from Q1 graduate Francesco Bagnaia (Pramac Racing), the reigning Moto2™ World Champion, who had a cracking Q2 to claim his best MotoGP™ grid slot yet. Takaaki Nakagami (LCR Honda Idemitsu) continued his solid weekend to set the sixth-fastest time in Q2, and the Japanese rider was just 0.017 off Bagnaia to claim his best Q2 result as well.

The forecast storm stayed away as sunny skies greeted the intermediate class riders for Q1 and Q2 at the Red Bull Ring, and we were to witness a few surprises. It was no surprise to see the likes of Iker Lecuona (American Racing KTM) and Luca Marini (SKY Racing Team VR46) come through the first part of qualifying though as 18 riders got set to battle it out for pole position.

Immediately it was Binder who was setting the pace as the South African set about trying to give KTM a home GP pole, but Nagashima had been quick all weekend and the Japanese rider wasn’t messing about in Q2 – taking provisional pole on his third flying lap as Chantra slammed in a lap good enough for provisional P3. But what could Championship leader Alex Marquez (EG 0,0 Marc VDS) do? The Spaniard was on the fringes of the top ten and went up into fifth, but his lap time was cancelled for exceeding track limits as the field struggled to go quicker than their early benchmark laps.

So did Nagashima, Binder and Chantra have the front row covered? They did. Tom Lüthi (Dynavolt Intact GP) was just over a tenth off at the third split but would slot into fourth before being demoted to fifth by top rookie Enea Bastianini (Italtrans Racing Team), with Lorenzo Baldassarri (FlexBox HP 40) completing Row 2.

Marquez, meanwhile, has plenty to do from P11 on the grid as he ended up just 0.008 behind Marini. The number 73 has a 33-point lead but will be gunning to move through quickly on Sunday, as will the men around him: rookie Jorge Martin starts 12th for Red Bull KTM Ajo at their home race, ahead of Augusto Fernandez (Flexbox HP 40) and Iker Lecuona (American Racing KTM). Mattia Pasini (Tasca Racing Scuderia Moto2) completed the top 15, just ahead of Marcel Schrötter (Dynavolt Intact GP), who starts P16 and will be looking for more on Sunday, too.

VNE Snipers’ Romano Fenati took pole position for the first time in nearly two years after taking to the top in Q2 at the myWorld Motorrad Grand Prix von Österreich, the Italian progressing through from Q1 before pouncing late for P1. Ayumu Sasaki (Petronas Sprinta Racing) was second quickest, with Jaume Masia (Bester Capital Dubai) third and the fastest KTM on the Austrian factory’s home turf.

Kaito Toba (Honda Team Asia) was the man on top as the flag flew to signal the end of the session, but from then on a flurry of riders crossed the line at the end of their final flying laps and the pack shuffled. Petronas Sprinta Racing’s John McPhee went it alone and crossed the line first, taking provisional pole position, but the Scotsman would slip down the order when the pack fired through.

However, a host of penalties will shuffle starting positions, and it’s McPhee who will start from pole.

Andrea Migno (Bester Capital Dubai) was awarded two penalties: his fastest lap in Q2 was cancelled and he was given a back of the grid start.

Kornfeil is tenth ahead of Yurchenko and Antonelli, with Canet just behind his key rival in P13. Suzuki and Stefano Nepa (Reale Avintia Arizona 77) complete Row 5 alongside the Championship leader.

Sasaki starts P20, Ogura P22, Rossi P28, Migno P29 and Binder P30. Alonso Lopez will start from pitlane due to his penalty from the Czech GP.