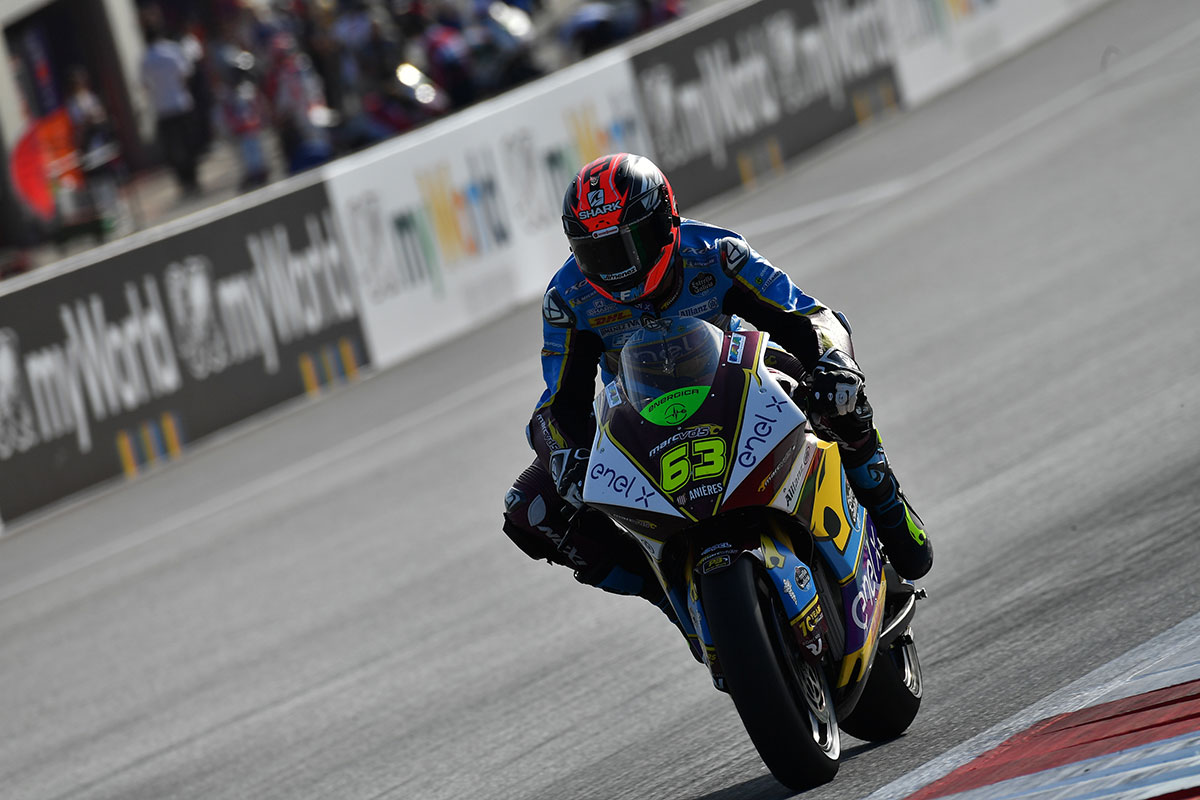 2008 125cc World Champion Mike Di Meglio has taken FIM Enel MotoE™ World Cup E-Pole honours at the myWorld Motorrad Grand Prix von Österreich after sticking in a 1:35.182 to place his EG 0,0 Marc VDS Energica Ego Corsa just 0.011 ahead of second-placed Xavier Simeon (Avintia Esponsorama Racing), with the rain staying away to allow the full spectacle of E-Pole to take place. One Energy Racing’s Bradley Smith completes the front row, a big step forward from a more difficult qualifying for the Brit in Round 1.

In the order dictated by combined practice times, the riders headed out one-by-one, with the fastest three heading for parc ferme before a faster rider knocked them out. Except Randy de Puniet (LCR E-Team) and Nico Terol (Openbank Angel Nieto Team), who exceeded track limits and therefore had their laptimes cancelled, set to start from the back, and Mattia Casadei (Ongetta SIC58 Squadra Corse), who crashed – rider ok.

Simeon was seventh on the combined timesheets ahead of E-Pole, leaving six riders to follow the former MotoGP™ rider. It was the Belgian’s best lap of the weekend too, a 1:35.193, and it became the benchmark.

Casadei was the first rider to try and go quicker but the Italian crashed at Turn 4 to end his chances of a good grid slot, with Championship leader Niki Tuuli (Ajo MotoE) then attempting to go P1…and the Finnish rider could only manage third behind Simeon and Jesko Raffin (Dynavolt Intact GP) at the time. Smith then stuck in a lap time good enough for P2, before Eric Granado (Avintia Esponsorama Racing) then set about trying to top teammate Simeon’s time. The Brazilian couldn’t and ended the lap seven tenths down, leaving it down to two: Di Meglio and Free Practice pacesetter Hector Garzo (Tech 3 E-Racing).

Di Meglio went out and was under at the first split, but it was tight around the whole lap. The Frenchman lost time in the third sector, however, he would then snatch P1 away from Simeon by just 0.011 over the line. It was all down to Garzo but it wasn’t to be for the Spaniard as he slotted into sixth and Di Meglio took his first pole in the paddock for ten years.

By the flag the top seven were separated by 0.221 in the close-fought encounter, with the grid led by Di Meglio and Simeon and Smith joining him on the front row. Raffin improved to go from P10 in Free Practice to P4 in E-Pole, and he heads up Row 2 for a much-improved Saturday in Austria.