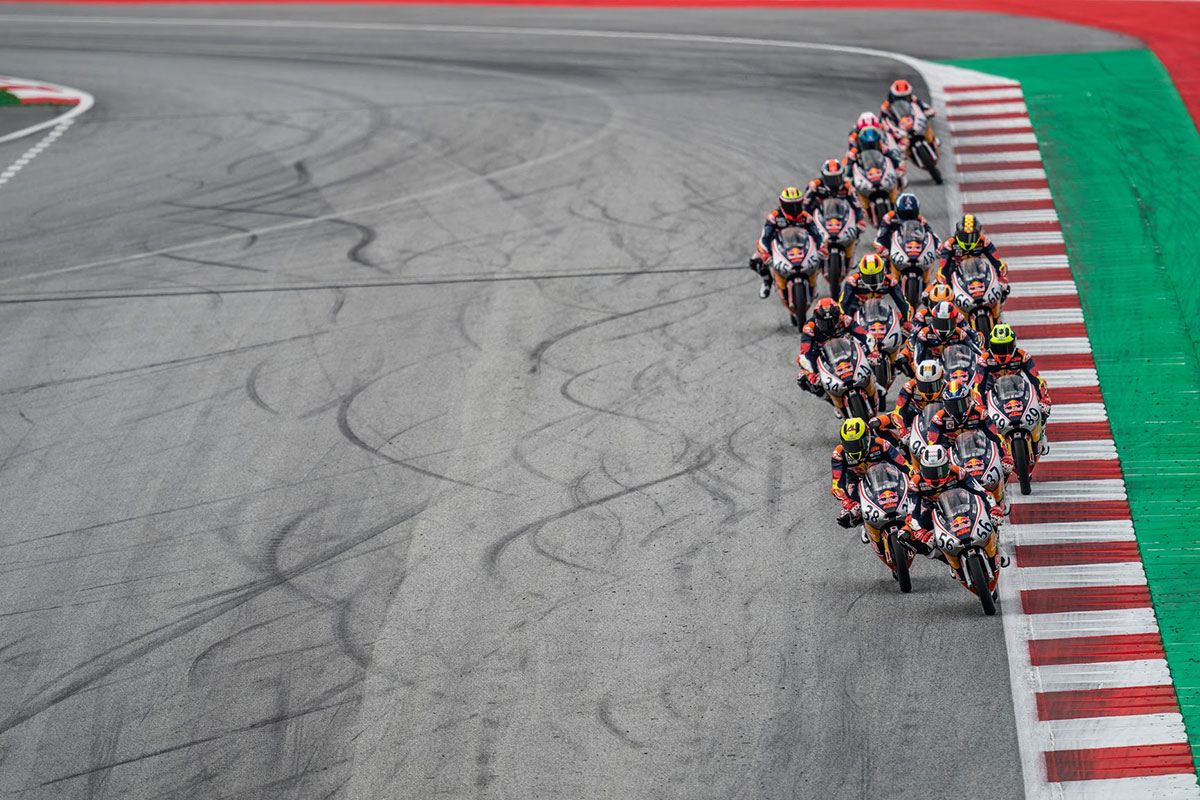 Any one of sixteen could have won the intense seventeen lap race but it was Japanese 18-year-old Haruki Noguchi who put together two perfect corners to complete his first Red Bull MotoGP Rookies Cup victory. Cup leader Carlos Tatay almost stole the win by passing him into the penultimate corner but the 16-year-old Spaniard drifted a fraction wide and Noguchi was back ahead.

Billy van Eerde, the 17-year-old Australian picked up his second podium of the weekend with a fine third ahead of Adrián Huertas, Pedro Acosta and Zonta van den Goorbergh. Two seconds covered the top 14 KTM RC 250 Rs at the finish.

Not shy about his intentions, Noguchi had made clear his determination to win after three third places. “Finally a win and I am very happy with that. It was half full gas and half a bit of planning. It was such a tight bunch that I though it best to keep in the top three or four to keep out of trouble.”

“On the last lap I wanted to take the lead and hold it but Tatay managed to get ahead and I had to repass him, then I went for maximum corner speed and using all the track at the last corner so I could not be passed. It worked. I want to thank everyone who supports me including the technical staff, we swapped back to the settings I used for Qualifying and that worked well today.”

With a hand already on the Cup title Tatay might have cruised a bit and picked up useful points but the racer never thought of that. “I’m not thinking about the championship. I wanted to win. I went for the inside line at the end but just could not hold on. Still, second is good and I am very happy after yesterday’s mistake at the start. I really want to thank my manager and my mechanic, they know exactly how to give me a boost when I need it.”

Wearing the same brilliant smile he carried after yesterday’s second place, van Eerde was happy with third. “It was a different race to yesterday, I was stuck more in the pack. Things were so close this time that I couldn’t find the line I needed and it was very hard to make progress. I just kept pushing though and made it work at the end.”

Like van Eerde, Huertas has had a torrid second Rookies Cup season but the 15-year-old Spaniard put that behind him with a fine fourth. “Finally, it’s time” he said. “I wasn’t feeling so good because every time I overtook someone they would repass aggressively and I was struggling in the group. I kept pushing and on the last lap I managed to make it work. I braked a little early for the second tight right hander and while everyone else went in deep and too fast I had the bike turned and got the drive out.”

The same plan didn’t work so well for Saturday’s winner Acosta. “I braked a little early and got hit,” explained the 15-year-old Spaniard. “I stayed on but I lost my drive and had to work hard just to get fifth.”

So rapid were the changes of fortune through the entire race that David Salvador, the 15-year-old Spaniard who had the lead with a couple of laps to go ended up 16th after colliding with Marcos Uriarte on the final lap. Uriarte rolled home 20th, completing a frustrating weekend that had looked so promising when he qualified second.

Pole sitter Alex Escrig was even more unlucky. He ended up stuck in the gravel trap on Saturday and didn’t even make the start on Sunday after a collision with van den Goorbergh on the warm up lap. Escrig fell and his bike was damaged so the 15-year-old Spaniard could not start.
Van den Goorbergh did not fall, started as normal but was quickly awarded a long lap penalty for the incident with Escrig. He served the penalty and then managed to get back in the pack.

“Sure it was my fault but I didn’t intend anything, I didn’t see him,” explained the 13-year-old Dutchman. “I served the penalty and then chased after the pack. It only took about three laps to catch them, then I worked my way through. I got to third but there were so many riders trying so hard I was only sixth at the line but still I think it was a good race,” he concluded after his second sixth place of the weekend.