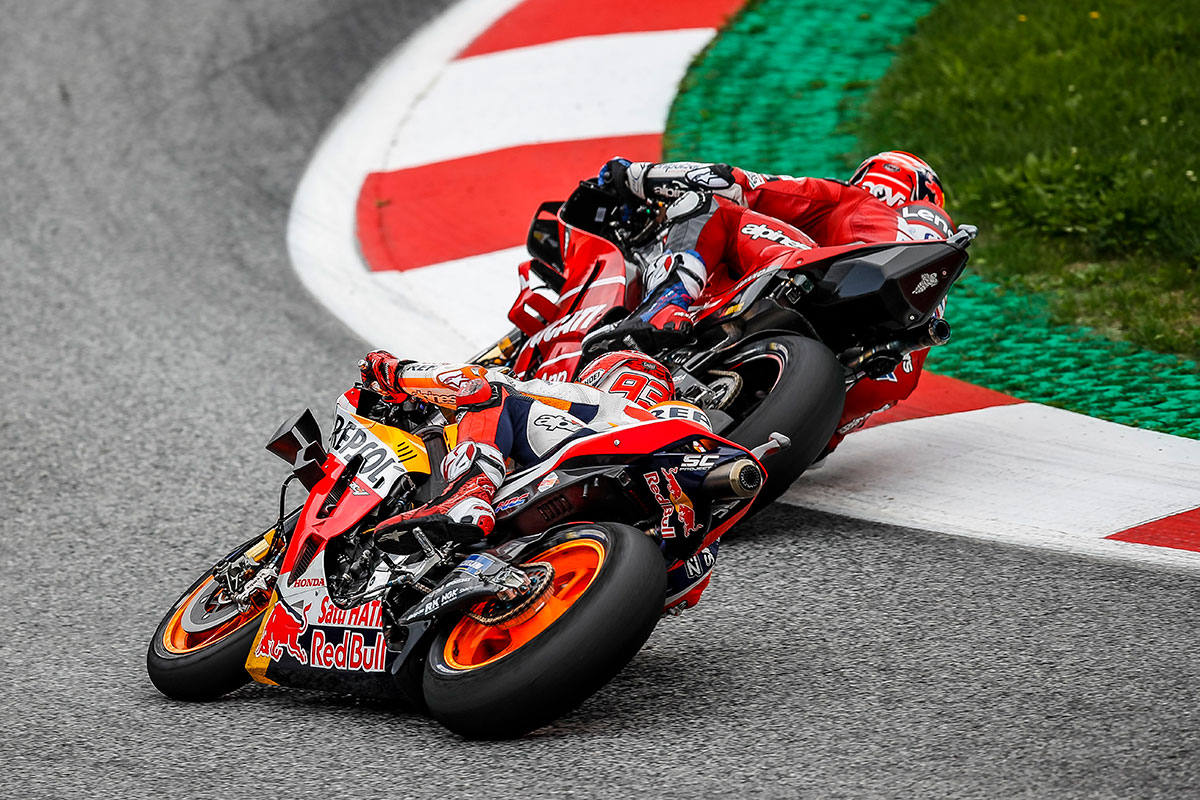 Another all-out ride from Marc Marquez at the Red Bull Ring saw championship leader fight for victory until the flag as Bradl continued his points run with an impressive recovery.

Saturday’s sunshine eventually returned to the Austrian GP after a sodden Warm Up. Come the start of the MotoGP race, conditions were closer to what riders had experienced over the course of the weekend with 23°C air temperature and the track at 32°C.

When the lights went out, Marc Marquez’s race got off to a hair raising start as he and Andrea Dovizioso battled into Turn 3 which saw the reigning World Champion run wide and down to fifth spot. Undeterred, Marquez put his head down and pushed on aboard his RC213V, quickly chasing down race leader Fabio Quartararo.

Lap eight saw Marquez move back into the lead for the first time, Dovizioso briefly challenging to take the lead. The World Championship leader was able to control the middle phase of the race before Dovizioso moved back through on lap 20. Biding his time, Marquez left it late to launch his counter attack and brought the 87,595 fans at the Red Bull Ring to their feet with a stunning set of final laps. Bradl will now head to Finland to sample the newly built Kymi Ring.

The battle went down to the final corner, Marquez taking second place by 0.213s as he tried to hold off Dovizioso. With his haul of 20 points, Marquez controls a healthy 58-point advantage in the MotoGP World Championship standings after finishing in the top two for eight straight races. Honda continues to lead the Constructor standings with 236 points.

The Repsol Honda Team now head for the United Kingdom and round 12 of the 2019 MotoGP World Championship at Silverstone, August 23 to 25. Jorge Lorenzo is set to make his racing return at the British circuit after recovering from the back injury he sustained in Assen.

Marc Marquez
2ND
“I’m happy because today we made a mistake with the rear tyre, immediately I saw all the soft tyres had better grip and even their consistency at the end was better than us. Even like this I tried because I’m Marc and I need to try! The second place is good, we missed in the last corner with a lot of sliding but Dovi did an incredible job. Still we are able to leave here with a 58-point lead so we will keep continuing like this. Even when we are not in the best shape, we are able to finish like this which is positive overall.”