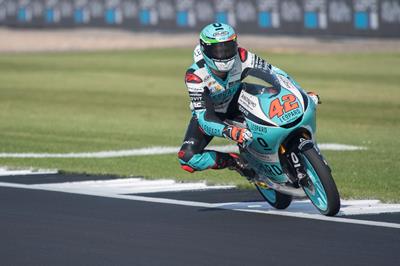 Following the good job done on Friday’s practice sessions, Lorenzo Dalla Porta has taken the second spot of the grid and Marcos Ramirez the ninth. Both riders will start from the first and the third line respectively on Sunday race at the Circuit of Silverstone.

Saturday has welcomed the Moto3 FP3 with a shining sun and hot temperatures, and this is something to really take benefit from specially if we bear in mind that we are about to race in Silverstone. With these conditions, Italian Dalla Porta and Spaniard Ramirez have managed to be inside the Top10 on the FP3. The #42 was the 3rd fastest, securing this way his chances for the Q2 and on the other side of the box, Dalla Porta suffered a little crash without consequences, but even like that his previous lap time was more than enough to hold its position to be in Q2 as he finished the 7th.

When it came to the crunch in the afternoon, the strategy paid off. Both of them did a couple of laps on the first exit, tried to deal with traffic, pushed and set a decent laptime (specially Dalla Porta who took the second fastest record). After the first stop, they did a second exit and finally the Italian kept that second position and Marcos Ramirez crossed the line the ninth. Starting from the first line of the grid will be very important for Lorenzo as he currently is the leader of the Championship by one-point-difference with rival Canet (who has taken the 12th position) and every single detail can be helpful on the fight for the crown. Ramirez is a Sunday man and won’t start so far this time, so a full Leopard podium is more than possible.

With good feelings and a positive mind, the team is ready to give its best tomorrow!

“I expected more on the qualifying session because I felt good this morning having a good reference. When I tried to do my flying lap on the Q2, I found some traffic and I couldn’t nail it they way I wanted. However, a ninth position isn’t that bad. The bike is ready, we have a good set up and a good pace, and that’s the most important”.