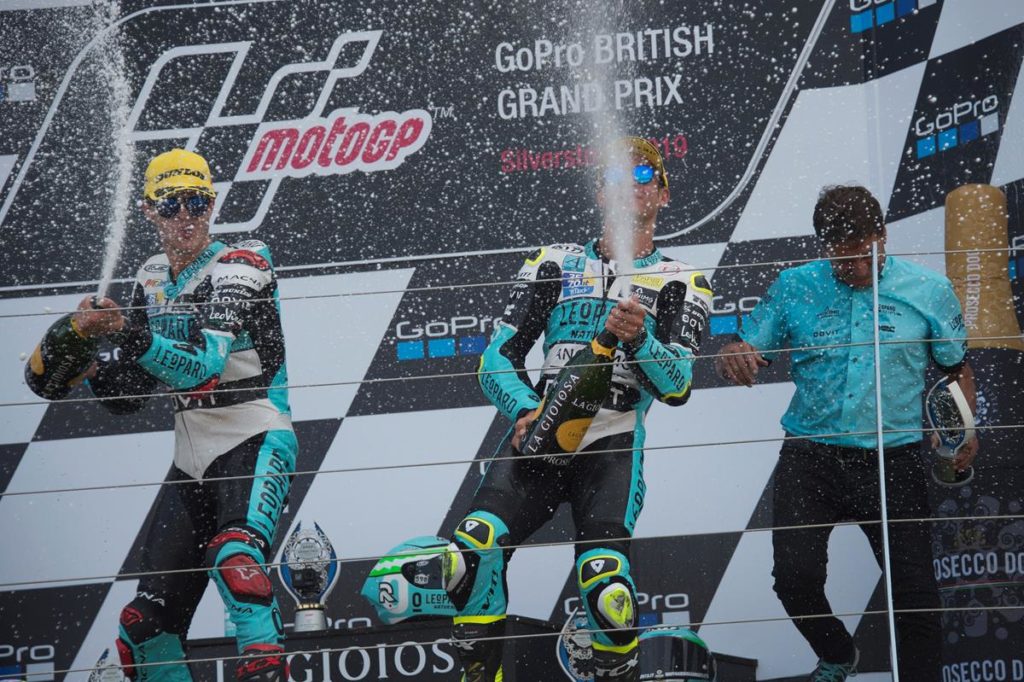 Leopard Racing is delighted after such an amazing Sunday on British soil! The Grand Prix of Great Britain has finished with Spaniard Ramirez as the winner of the Moto3 race and teammate Dalla Porta the third.

We wrote it yesterday, ‘a blue podium is more than possible’ and indeed it’s been. Leopard Racing is leading the standings more than ever after having its two riders on the podium for the second time this season (the first one was at the Sachsenring before the summer break when Dalla Porta got the victory and Ramirez was the 2nd). This weekend the Italian started from the first line of the grid and Ramirez from the third, and during the 17 laps of the race they’ve been strong, fast, and clever. Lorenzo lead most of the race and was aggressive when needed, and if someone tried to took him the first position, he passed them back to recover the leading spot. Just a mistake on the last lap has placed him on the third step of the podium.

But the man from Conil de la Frontera (Andalusia, Spain) pushed from the ninth position and appeared among the first group of riders at the last stages of the race. With the gloves off, Marcos imposed his pace and overtook the riders he had in front, being eager for victory and having clear in mind that today he could be his day. He is normally one of those who can do that: a comeback, a fight, a victory. Aggressive and smart, Ramirez has nailed it at the Circuit of Silverstone.

After today’s result, Lorenzo Dalla Porta keeps the leading position on the standings (171 points) opening a gap with direct rival Canet (14-points-gap) and teammate and winner Marcos Ramirez sticks to the fifth position (114 points). And of course, the team is more leader than ever on the classification (285 points with a 85-points-gap advantage).

See you all at the fabulous Circuit of Misano the 15th of September!

“I knew I had the potential to take a good result and that’s what I’ve tried today. I started from the ninth position but I felt I could fight for the podium. At the beginning I struggled to overtake riders but in the middle of the race I changed my mind and I said ‘ok, I will push harder’. I had everything in mind to atttack at the last braking point. I’ve tried and I’ve gotten my second victory! This is an extra motivation and I will try to repeat this result or fight as much as I can in the rest of the races. Many thanks to the team, today I’ve felt really good on the bike. Hard work pays off”.