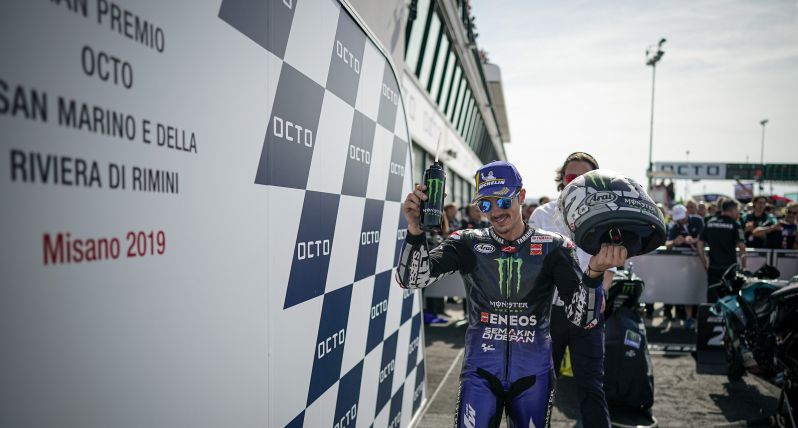 Monster Energy Yamaha MotoGP‘s Maverick Viñales was on the hunt during the GP di San Marino e della Riviera di Rimini. He spent almost the entire race positioned in third place, stalking the front runners, but came just short to enter the challenge. The stakes were high for Valentino Rossi at his home race at the Misano World Circuit Marco Simoncelli. He had to make his way through the rider field, starting from P7, and pushed to the fullest to take fourth position.

Viñales stuck to his plan at the start of the San Marino GP. Starting from P1, the Spaniard had said yesterday that his strategy was not to leave any door open on the first corners on the opening lap. He did just that but didn‘t manage to break away. On lap 3 he had to relinquish the lead to fellow Yamaha rider Fabio Quartararo, and one lap later also Marc Marquez came past.

The Factory Yamaha rider couldn‘t match the early pace as he didn‘t have a good feeling with the front, but he wasn‘t out for the count. He waited for the race to come to him and started to make up some ground after lap 14. He was inching closer but struggled to reduce the gap to under 2s until the final five laps. With the two leading men occupied with their own battle, the number-12 rider was riding on the limit. He came under 0.8s behind Quartararo but wasn‘t able to put in a move. Viñales took the chequered flag in third place, 1.636s from the front.

Today’s third place sees Viñales stay fifth in the championship standings, one place ahead of Rossi, with five points between them. Yamaha remains third in the constructor standings, and Monster Energy Yamaha MotoGP also stays in third place in the team classification.

Viñales and Rossi will now travel to Spain for the Gran Premio Michelin de Aragon, held from September 20-22.“I‘m really happy because it was just about 1.5s to the top. We‘re getting closer at every race and we‘re trying to understand how we can be better, faster, and more consistent. This was a race in which the tarmac was very slippery, and I was there fighting for a top position. We need to keep working. We‘re starting to understand many things, but it‘s not enough yet. I have to improve, but I‘m gaining confidence in the races. Up next is Aragon, which is a track I really love and where I always feel like I can go fast. Yamaha is going in the right direction. In Silverstone Yamaha was also pretty strong. If Fabio hadn‘t crashed, for sure we would both have been close to getting the victory there. So, we‘re getting better every race. Especially on my side, I have to make another step, but we‘re going to make it. We‘re on our way and I really feel like we have the potential to fight for the victory.”