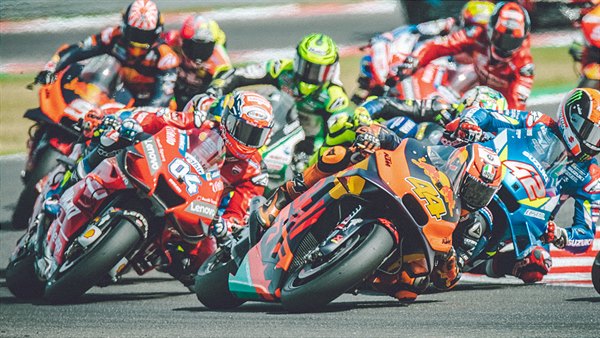 The second visit to the Italian mainland in 2019 MotoGP drew the series to the flat and demanding asphalt of the Misano World Circuit Marco Simoncelli. Typical sunshine and high summer temperatures graced the weekend.

Red Bull KTM were eager for the twenty-seven lap race – their 51st in MotoGP – to begin with Pol Espargaro stationed into 2nd place on the grid (the team’s best qualification and a half-second improvement on 2018) and Johann Zarco in 11th (the Frenchman’s highest dry ranking so far) despite the former world champion suffering a fast crash in morning warm-up.

Espargaro blasted into the top five in the opening stages and lost two positions to multiple GP winners this term Andrea Dovizioso and Alex Rins and also local hero Valentino Rossi. When Rins crashed out Espargaro maintained a solid pace to the chequered flag to bank 7th and 7 championship points. It was the seventh top ten classification of the year for the Spaniard.

Red Bull KTM Tech3’s Miguel Oliveira crashed on lap 9 but the Portuguese was able to remount and rejoin the race. Despite a sore right shoulder as a result of his blameless accident at Silverstone three weeks ago, the Portuguese reached the flag in 16th, just one position behind teammate Hafizh Syahrin who grabbed points for the fourth time in 2019.

MotoGP gathers together in a matter of days for the Gran Premio Michelin de Aragon at MotorLand in Spain.

“We started 2nd and we fought top six-seven: we had a great weekend and we must be very proud. There are good riders and such good bikes that you need to go on the limit every single lap. At the moment I am controlling it quite well and I am finishing every race which is very important for the championship. We had good corner speed here but I was losing it all in Turns 3, 8 and 10 with [Andrea] Dovi and 11 with [Franco] Morbidelli. It was not much. Just two tenths per lap: almost nothing but in the end it makes a difference. I’m looking forward to jumping on the bike again and when you finish a race with that feeling then you want to start right away.”