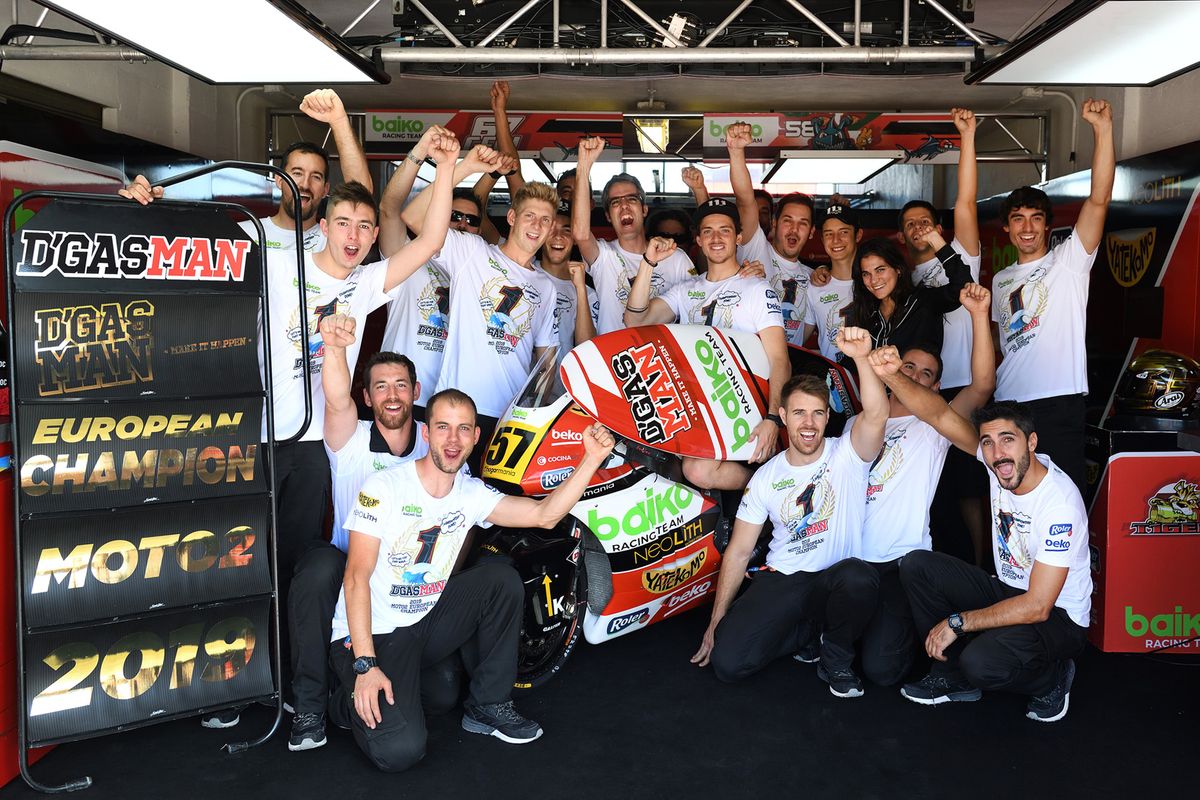 The Circuito de Albacete today was the scene of the seventh round of the FIM CEV Repsol season, with Edgar Pons (Baiko Racing Team) claiming the Moto2™ European Championship title and Jeremy Alcoba (Laglisse Academy) getting within a whisker of the FIM Moto3™ Junior World Championship title. Moto3™ leader Alcoba took a crucial victory while in Moto2™ Pons won the first race of the day and Héctor Garzó the second. In the European Talent Cup, José Antonio Rueda (Junior Team Estrella Galicia 0.0) earned his first victory of the season and was joined on the podium by his two teammates.

On the last lap, Carlos Tatay overshot trying to take the lead from Jeremy Alcoba; in doing so he put himself out of the running and left Daniel Holgado to finish second ahead of Barry Baltus. However, Carlos Tatay was finally judged third after a one-position penalty against Barry Baltus. Ryusei Yamanaka came in fifth and Xavier Artigas sixth, followed by Deniz Öncü. Jeremy Alcoba will go to the final round of the season in Valencia 46 points ahead of Carlos Tatay with 50 points at stake; in other words, 5 points is all he needs to take the title. The race winner was awarded the Repsol free fuel cheque.

Edgar Pons took advantage of his first opportunity and lifted the Moto2™ European Championship title in the first race of the day – and he did it like a champion, winning from pole position. The Baiko Racing Team rider headed the race from the off followed by Héctor Garzó, Marcel Brenner (Kiefer Racing) and Anupab Sarmoon (VR46 Master Camp), who all took advantage of a good start to place themselves at the head of the race. Gradually Edgar Pons and Héctor Garzó pulled clear together while behind Yari Montella (Team Ciatti-Speed ​​Up) went down taking with him a frustrated Marcel Brenner. Miquel Pons (H43 Nobby Talasur Blumaq) started out ninth but reached the chasing group formed by Alessandro Zaccone (Promoracing), Tommaso Marcon (Team Ciatti-Speed ​​Up) and Anupab Sarmoon. He passed them one by one to cross the finish line in third position and join Edgar Pons and Héctor Garzó on the podium. In Superstock 600, Joan Díaz (DCR Racing Team) took the victory in the category. Héctor Garzó won the Repsol free fuel cheque.

In the second Moto2™ European Champions race of the day Héctor Garzó earned his second victory of the season in a race reduced to 10 laps after it was stopped by a red flag for the fall of Ramdan Rosli (Onexox TKKR SAG) and Matthias Meggle (Dynavolt Intact SIC). For the restart, the new grid was based on the positions at the red flag, with Héctor Garzó as poleman followed by Edgar Pons and Alessandro Zaccone. Garzó led from the start and gradually pulled away from Zaccone. Behind, Miquel Pons ended up being passed by Yari Montella. On the last lap, the new champion of the category went down so in the end it was Alessandro Zaconne and Tommaso Marcon who took the podium with race winner Héctor Garzó, who received the Repsol free fuel cheque and the runner-up slot in the final championship standings. In Superstock 600 Peetu Paavilainen (Redding-Pinamoto RS) was the best finisher.

In the ETC, Junior Team Estrella Galicia 0.0 teammates José Antonio Rueda, Diogo Moreira and Adrián Cruces took the podium together after a race which was interrupted on the first lap by a multiple fall. In the new race, set at 12 laps, José Antonio Rueda and Diogo Moreira placed themselves in front of poleman Izan Guevara, who was riding injured after suffering a fall in the qualifying session on Saturday. The new champion began to fall back while Fermín Aldeguer (Bester Capital Dubai), despite also riding with an injury, moved up to the Junior Team Estrella Galicia 0.0 riders. Behind, Daijiro Sako (Cuna de Campeones) reeled in the chasing group which included Adrián Cruces (Junior Team Estrella Galicia 0.0) – and it was Cruces who ended up taking third place after Fermín Aldeguer and Daijiro Sako were penalised. The winner of the race, José Antonio Rueda, taking his first win of the season, received the Repsol free fuel cheque. Second place went to Diogo Moreira. Finally, the injured Izan Guevara, champion and winner of six races this year, crossed the finish line in ninth position.

The eighth and final round of the FIM CEV Repsol season will take place at the Ricardo Tormo Circuit in Valencia on November 10.