Two CEV Repsol titles could be settled in Albacete 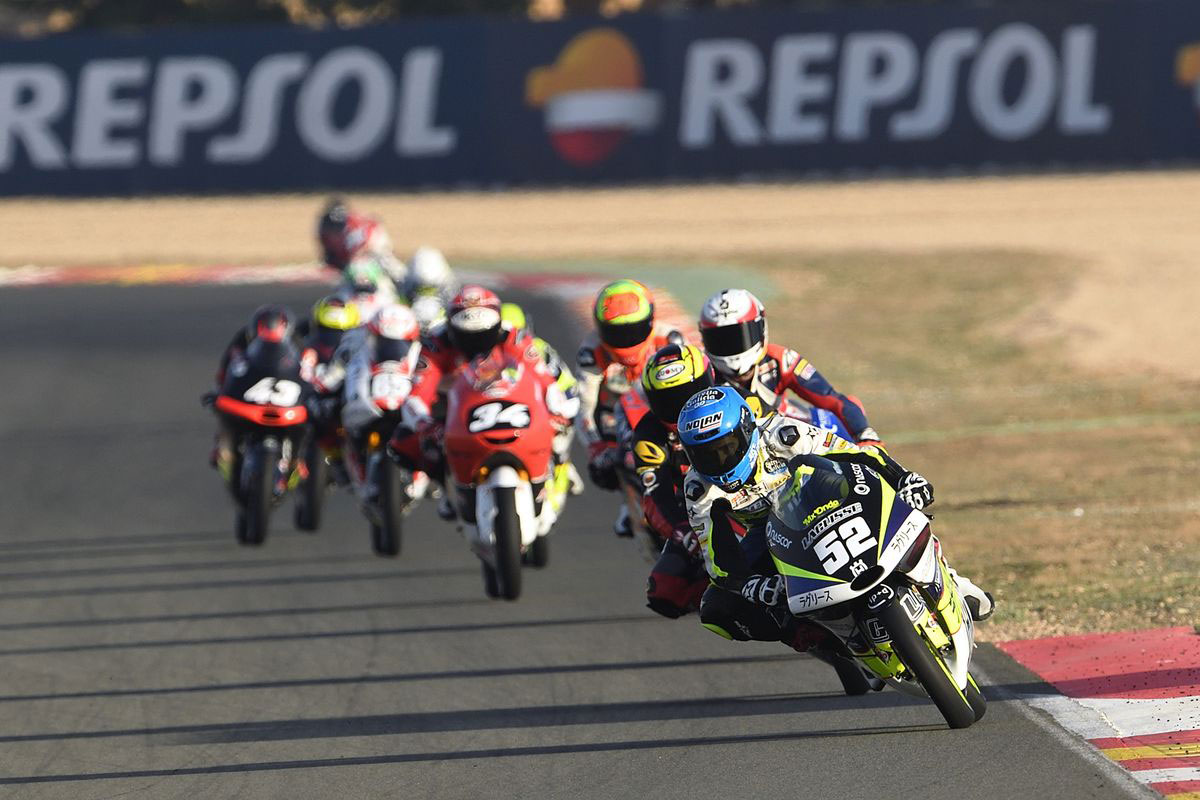 The FIM CEV Repsol 2019 season is on its last lap. This Sunday in Albacete the penultimate round of the season (the final round is in Valencia in November) is taking place – and the title of both the FIM Moto3™ Junior World Championship and the Moto2™ European Championship are up for grabs. Jeremy Alcoba (Laglisse Academy) and Edgar Pons (Baiko Racing Team) will both have their first shot at the title from pole positions in their respective categories, while champion Izan Guevara (Cuna de Campeones) will head the European Talent Cup starting grid.

In the FIM Moto3™ JWCh, leader Jeremy Alcoba’s Q1 time of 1:34.156 earned him his third pole of the season, beating Deniz Öncü (Red Bull KTM Ajo) by just 0.049 and Barry Baltus (Ángel Nieto Junior Team) by 0.160. These three form the front row of the grid. Carlos Tatay (Fundación Andreas Pérez 77), who arrived in Albacete after achieving a double in Jerez and holding second place in the classification, will head the second line of the starting grid alongside Ryusei Yamanaka (Junior Team Estrella Galicia 0.0) and Davide Pizzoli (Leopard Impala Junior Team). Poleman Jeremy Alcoba has his first opportunity to become champion.

The Moto2™ ECh qualifying session was just as close. Edgar Pons took his fifth pole of the season out of six, posting a best time of 1:32.074 set in the morning session. Once again Héctor Garzó (CNS Motorsport) is the Baiko Racing Team rider’s main rival after finishing only 0.035 behind the leader in the absence of Niki Rikhard Tuuli (Team Stylobike). Alongside on the grid will be Yari Montella (Team Ciatti-Speed Up), and the second row will be made up by Alessandro Zaccone (Promoracing), Tommaso Marcon (Team Ciatti-Speed Up) and Marcel Brenner (Kiefer Racing), all of whom classified within 0.10 of the poleman. Edgar Pons will have his first shot at the title in the first of the two Moto2™ races in Albacete. Joan Díaz (DCR Racing Team) was the fastest in the Superstock 600 category.

In the ETC, although already crowned champion in the last FIM CEV Repsol round at the Circuito de Jerez Ángel Nieto, Izan Guevara kept the pressure on and will head the starting grid for the fourth time this season. The Cuna de Campeones rider took the pole in a time of 1:36.764, achieved in Q1 of Group A, while Diogo Moreira (Talent Team Estrella Galicia 0.0) will be second as the fastest in Group B. Daijiro Sako (Cuna de Campeones) closes out the front row as the second fastest of the two groups.

The schedule for next Sunday’s races is as follows:

Television networks and new media platforms in Europe and many countries are showing increasing interest in live broadcasts or on-demand videos of FIM CEV Repsol events. In Spain, DAZN will include the FIM Moto3™ JWCh, Moto2™ ECh and ETC in its programming, showing each of the scheduled races – as will BT Sports in both in the United Kingdom and Ireland, with live broadcasts of all races in each category. Also new is that Canal Plus in France will broadcast all the races live on Canal+ Sport. In Italy, Sky will broadcast live the FIM Moto3™ JWCh and Moto2™ ECh races.

In Belgium, GP Inside will offer live broadcasts of all the Championship races. Through Eurosportplayer (Holland and Romania) Eurosport will also offer live coverage of the FIM Moto3™ JWCh and Moto2™ ECh and ETC. In Portugal, Sport TV consolidates its commitment to motorcycling with live or recorded broadcasts of all the races scheduled throughout the season. Hungarian fans will be able to follow the young hopefuls of the European Talent Cup thanks to the recorded broadcast of ETC races by the Spiler TV channel.

In addition, in those countries without television coverage, all races will be broadcast live on the championship’s YouTube channel.