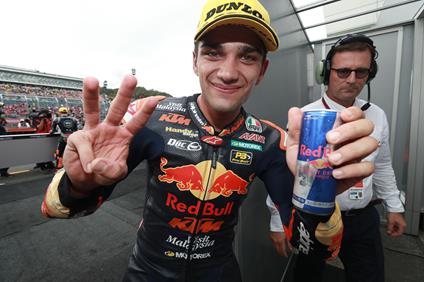 The flyaway triple header could not have got off to a better start for Jorge Martin, who recorded today his first podium result in the intermediate category by finishing third at the Japanese Grand Prix. The Spaniard made up 11 positions in the race, to earn the Red Bull KTM Ajo Moto2 team their seventh podium of the season. For his part, Brad Binder had to save a crash at the start of the contest which lost him several positions, forcing him to fight back and eventually take 12th place.

Martin, who took off from the fifth row of the grid, made a spectacular start, setting a very strong pace, which saw him overtake six rivals in less than five laps. The Red Bull KTM Ajo rider continued to make up positions and, by the half way point in the contest, he was up to fourth. The Spaniard put together a series of fast laps which allowed him to hunt down the third classified at the end of the race. He then successfully overtook his rival and was able to hold on for a first Moto2 podium. Jorge continues to climb up the general standings and is now in 14th place, with 63 points.

With no time to rest, the Red Bull KTM Ajo Moto2 riders head straight on to the Australian Grand Prix, which will take place at the Phillip Island circuit from 25th to 27th October.

“I still can’t believe it. We worked very well all weekend and, although yesterday the qualifying was in the wet we had a good pace. Today at the beginning of the race I dropped back, but as I started to make up the positions little by little I moved forward. Fighting for third place was difficult and I was on the limit setting fast laps. This first podium feels great and I hope to continue like this for the rest of the season.”