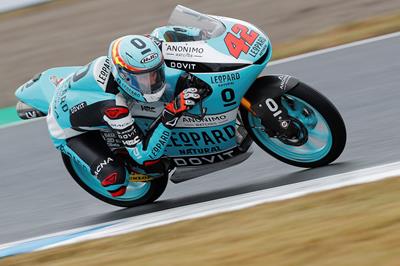 Leopard rider Lorenzo Dalla Porta crosses the line as the winner of the Grand Prix of Japan and teammate Marcos Ramirez classifies the 8th. After today’s result, the blue squad turns into the World Champion Team of 2019.

Marcos Ramirez, who had started from the 12th position, has finally finished the 8th. Added to Dalla Porta’s result, the points achieved by both riders have turned the Leopard Racing into the World Champion Team with still 3 races to go. A marvelous feeling after the 4 victories and the 8 podiums they’ve get altogether. The 373 points gathered up uptil now and the 145 points of advantage against the second, have turned the Leopard Racing into the best team of the 2019.

With these good vibes the team heads towards Phillip Island. See you all there in a week!

“This weekend I had very good feelings for the race and I wanted to take a better result. The start didn’t go the way I expected, I’ve been pushing throughout the race and I’ve tried to do my best, but we’ve finally crossed the line the 8th. Now we will get to Australia and I can’t wait to race there to try it again. Many thanks to the team for the job done”