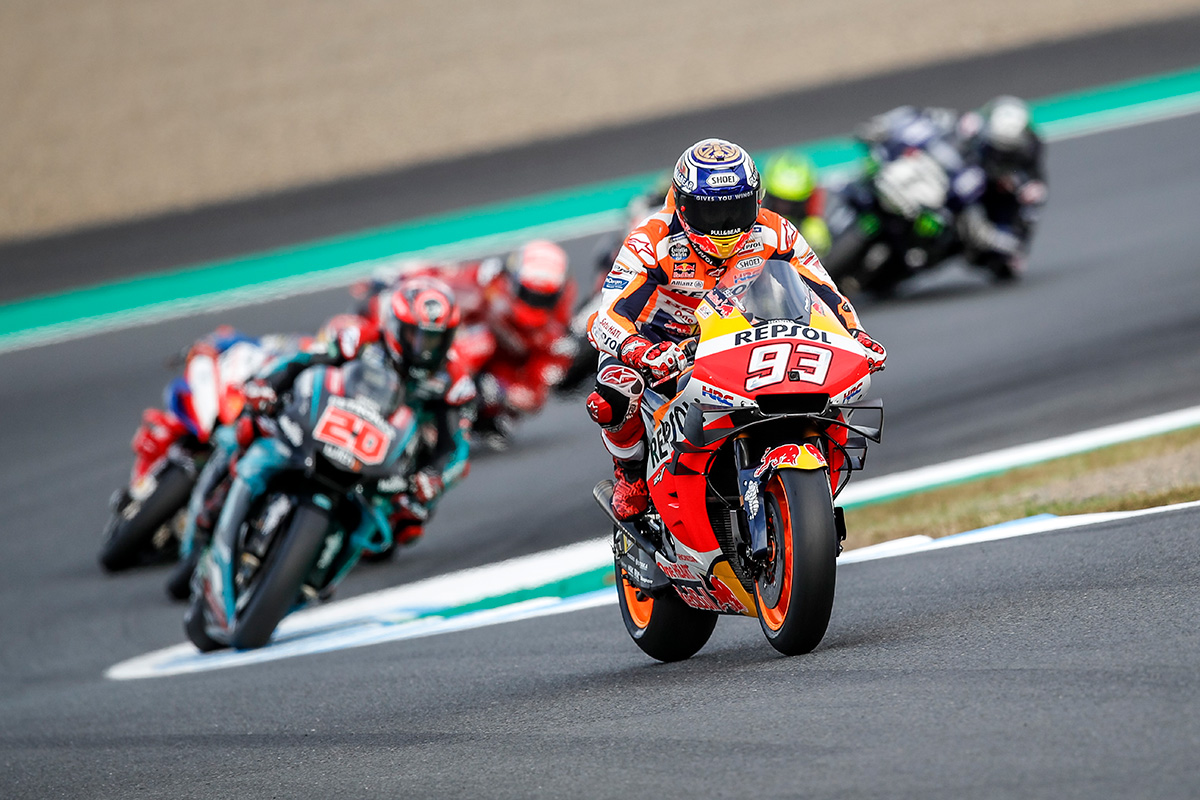 A tenth win of 2019 for Marc Marquez wrapped up the Constructors Championship for Honda after an inch-perfect ride in Japan.

Launching perfectly off the line, Marc Marquez went around the outside of his competition to lead through the first corner. Fabio Quartararo tried to respond to the pace of the eight-time World Champion, but within just three laps Marquez had an advantage of over one second and followed it up with successive flying laps. By lap 13 the gap had grown to two seconds and the reigning World Champion switched his attention to managing the race. Crossing the line 0.870s ahead of Quartararo after easing his pace in the closing laps, the Repsol Honda Team rider continued his perfect record of top-two finishes in 2019. The victory is the tenth 2019 and his fourth in a row, the first time Marquez has achieved four-straight wins in the premier class since 2014.

Taking his 54th win in the premier class, Marc Marquez draws level with the legendary Mick Doohan as the most successful premier class Honda rider. The 14 podiums, 13 of them in succession, of 2019 also move Marc Marquez to 350 World Championship points, just 33 points shy of Jorge Lorenzo’s all-time premier class points record of 383 with 75 points still to play for.

Making his 200th premier class start, Jorge Lorenzo battled through a difficult start to the Japanese GP. Lorenzo crossed the line in 17th position and while not satisfied with the result, is pleased with his improved feeling and pace aboard the Honda RC213V in the closing laps. The finish saw Lorenzo reduce the margin between himself and the race winner to its smallest margin since his return from injury – a trend he will look to continue at Phillip Island in just a week’s time.

The MotoGP World Championship now heads directly to round 17, the Australian Grand Prix at Phillip Island from October 25 to 27.

Marc Marquez
1ST
“It wasn’t an easy race. I was pushing from the beginning, the strategy was clear – I had to try to open a gap. I felt strong and with the team we had calculated a pace of 1’46 low but then I was able to ride in 1’45 high – good news for me but I had to slow down a little bit. I worked on riding as smooth as possible and I was able to open the gap to two seconds but in the final two laps we were getting a little low on fuel because Motegi is always very demanding. There was a little bit of pressure to win the Constructors Championship in Japan, but I love the pressure and it is great to win it here for Honda because everyone works so hard. All the Repsol Honda Team did a great job to find the best setting and strategy for this race.”

Jorge Lorenzo
17TH
“We made an improvement on the bike this weekend and my feeling was better. Today in the second part of the race I was able to enjoy riding the bike again and go much faster than at the start of the race. At the end we were closer to the front than any of the other races since my injury, a second from the fastest in the last laps. The problem was at the beginning, I couldn’t play with the bike as much as at the end and this is where we lost all our time. But towards the end I was able to little by little, brake later and go faster. With the pace at the end I could have been closer to the leader. Now we try to keep the momentum for Phillip Island.”