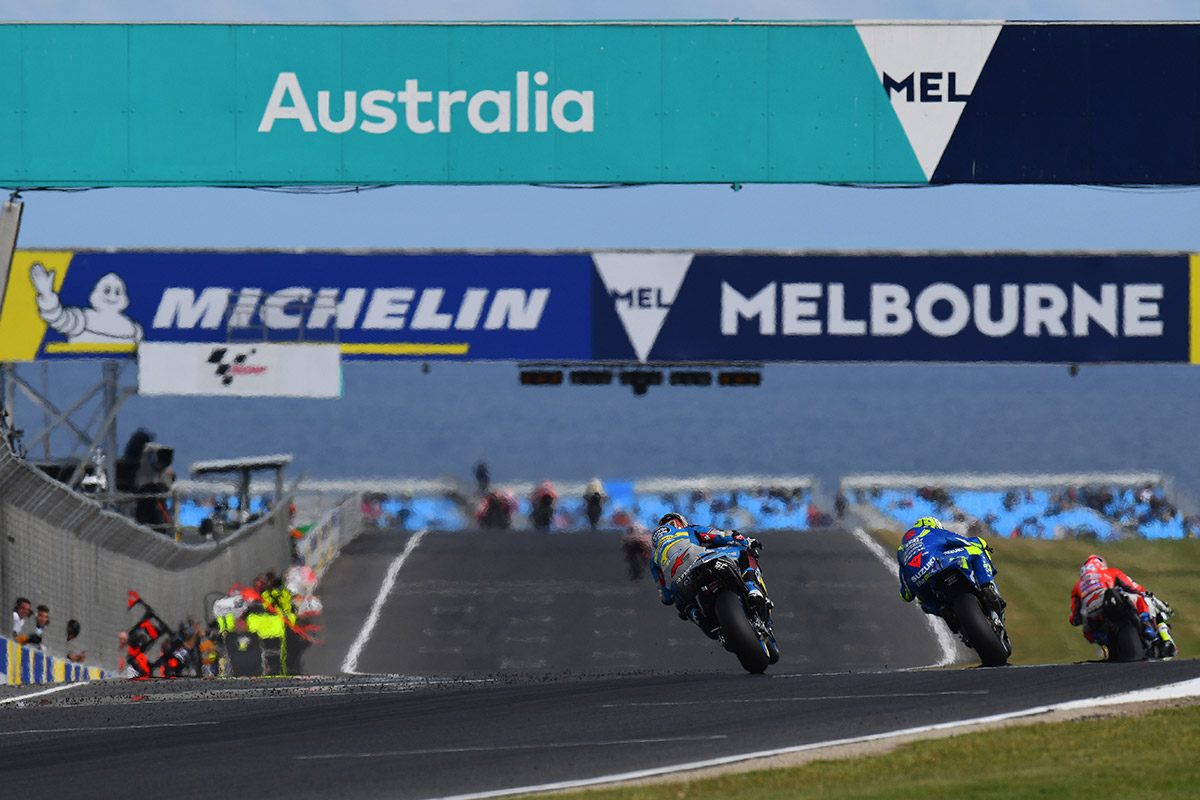 The most beautiful racetrack in the world could doubtless be an argument for hours, days or weeks, but however long the debate goes on, Phillip Island Grand Prix Circuit will continue to feature. There are few more stunning places to watch motorbike racing and there are few better stages on which to compete, with some more good memories surely just around the corner in the Pramac Generac Australian Motorcycle Grand Prix. This year at the Island, it’s all about milestones and titles (and some of the best racing we’ve likely ever seen).

Marc Marquez (Repsol Honda Team) may have wrapped up the riders’ title, Honda the Constructors’ and Fabio Quartararo (Petronas Yamaha SRT) Rookie of the Year, but there’s plenty in still in play. That said, a lot of the spotlight this weekend will first be stolen by one man: Valentino Rossi (Monster Energy Yamaha MotoGP). Why? ‘The Doctor’ makes his 400th Grand Prix start.

To say the milestone is a rare one is to undersell it to extremes. Rossi has been the most experienced on the grid and the most experienced in history for some time, but 400 is quite some number. It’s 42.5% of all Grands Prix, and he’s won 115 and scored points in 353 of them, taking victories on on seven different bikes as the only rider to have won on 500cc two-stroke, 990cc four-stroke, 800cc four-stroke and 1000cc four-stroke machinery. A few of those successes have come at the Island too, so it’s a good place to celebrate.

Whether or not he can celebrate again this season remains to be answered. He last won in Australia in 2014, and with teammate Maverick Viñales (Monster Energy Yamaha MotoGP) having taken the win last year and other podiums since, that’s good reason to believe the bike can do it again. And Rossi? Motegi wasn’t the best preparation, but you don’t get to 400 starts without the ability to bounce back like no one else.

Viñales, though, could be stiff competition – as could Quartararo, also on the Yamaha. The Frenchman has been closest to stopping Marquez’ run of four in a row by some stretch, so could Australia finally see him take that win? It’s a big ask but so was the rest of what Quartararo has achieved this season, and he’s fast everywhere.

Meanwhile, Jack Miller (Pramac Racing) also has a target on Quartararo’s back. The Australian races on home turf with some serious determination to do well for the home fans and get another top result this season, but that’s also compounded by crunch time in the Independent Team rider standings. Quartararo is currently 38 points clear of the Aussie, so it could well be decided on the Island.

Then there’s the team standings, currently led by the Ducati Team. But it’s only 17 points the difference, and with Marquez on a charge, it could change hands…but Ducati teammates Andrea Dovizioso (Ducati Team) and Danilo Petrucci will be pushing hard to try and hold onto it. Phillip Island has sometimes been a more difficult preposition for the Borgo Panigale factory more recently, although it has been good hunting grounds. Dovizioso also has second in the standings ready to wrap up, and Petrucci is running out of time to hit back again Viñales and Alex Rins (Team Suzuki Ecstar) in the fight for third…

Rins could be a real force to be reckoned with at fast, flowing Phillip Island, and a serious complication for those who probably already have their sights set high. Last season he was gaining traction, this year he’s fighting for third overall and is already a two-time MotoGP™ race winner…

Pol Espargaro (Red Bull KTM Factory Racing) has a stunning record at the Island as a rider so he’ll want to try and get well back inside the top ten, and teammate Mika Kallio will want to score. A familiar face now in different colours will be a huge presence to watch this weekend too, as Johann Zarco debuts in Takaaki Nakagami’s LCR Honda Idemitsu seat. The Frenchman’s in for three races, and what a place to start learning the ropes of a completely new bike…

Alex Marquez (EG 0,0 Marc VDS) heads Down Under for the Pramac Generac Australian Grand Prix in a position he’s not been in since 2014: with Championship point. That said, the Spaniard’s advantage isn’t quite enough to make it a done deal, so it’s still very much everything to play for for those on the chase. And on the chase, there are quite some names.

Marquez’ smallest advantage is currently the 36 points he has over Tom Lüthi (Dynavolt Intact GP), who was back on the podium at Motegi for the first time since Catalunya. That said, the Swiss rider has been a consistent scorer and finisher where others have faltered – and it’s paid off. Augusto Fernandez (Flexbox HP 40) may have more wins, but the Spaniard has also missed out on a couple more occasions.

Jorge Navarro (Beta Tools Speed Up), meanwhile, is another who’s in his position – fourth overall – by virtue of consistency. But the Spaniard has had a couple of more difficult rounds of late and that could be playing on his mind on the road to Phillip Island. He’s also yet to win a race, although his podium record has been impressive. He’s 48 points behind, however, so Marquez need only outscore him by a couple to take his threat off the table.

Brad Binder (Red Bull KTM Ajo), in fifth, was the man who really missed out at Motegi. The South African went into it 44 points adrift and a run off followed by some contact as he got the bike back under control left him fighting back from outside the top 20. He managed to do so, but he’s now 50 points down and HAS to take the fight to Marquez. Outscoring the Spaniard and outscoring him big is the only thing that’s going to keep his hopes of the crown rolling on to Malaysia.

Finally, Luca Marini (Sky Racing Team VR46) is the sixth man still mathematically in with a shout – and he’s the man in form. The Italian has now taken back-to-back wins for the first time in his career, but he, like Binder, needs to overhaul Marquez by quite some margin. He could be a complicating factor for the Spaniard however, given his searing pace in both Thailand and Japan, and he races with much less pressure…

There are so many combinations for the six men left in the fight that it’s almost impossible to predict how the Championship could ultimately be won this weekend. But the one constant is the maths: to make it a definite, Marquez needs to leave Phillip Island with more than 50 points in his pocket over each of his rivals. Can he do that Down Under? Or is the buffer enough to see him content to keep reeling in the points and let the title fight roll on the Malaysia?

Aron Canet (Sterilgarda Max Racing Team) needed a comeback at Motegi and the Spaniard didn’t get one, and that on the day Championship leader Lorenzo Dalla Porta (Leopard Racing) won his second race of the season. That worst case scenario for Canet – a 0 vs 25 points – means it’s a final stand for the Spaniard Down Under, with Dalla Porta poised to lift the 2019 crown at Phillip Island if he can increase his advantage by more than three points.

50 is the magic number, and Dalla Porta is currently 47 clear. So if he wins the race, he’s won the title. Anywhere else and it’s about the maths and getting above that pivotal number 50. Will he do it? He’s only had one top ten at Phillip Island before, but his track record hasn’t been the biggest tell this season as he’s shown serious pace everywhere. Canet, meanwhile, will hope the stats do tell a bigger story as the Spaniard took his first ever podium on the Island in 2016.

Albert Arenas (Gaviota Angel Nieto Team) could well lead the leagues of riders hoping to complicate the Championship duel. The Spaniard is the only man on the grid to have previously won at Phillip Island and he’s on a roll of late…and then there are the likes of John McPhee (Petronas Sprinta Racing), who’s gunning for third overall, and Tony Arbolino (VNE Snipers), despite a couple of rougher races for the Italian. Celestino Vietti (Sky Racing Team VR46) could be a key threat too – the Italian took his first podium on only his second Grand Prix appearance last year in Australia, and he does have a long shot at wrapping up Rookie of the Year, currently 28 points clear of Ai Ogura (Honda Team Asia).

There are also a couple of home heroes who’ll be taking their shot at a Grand Prix weekend: Yanni Shaw and Rogan Chandler (Double Six Motor Sport). The two wildcards will likely be keen to head out for FP1 at 9:00 local time (GMT +11), before the race is an hour later than normal at 12:00 on Sunday.