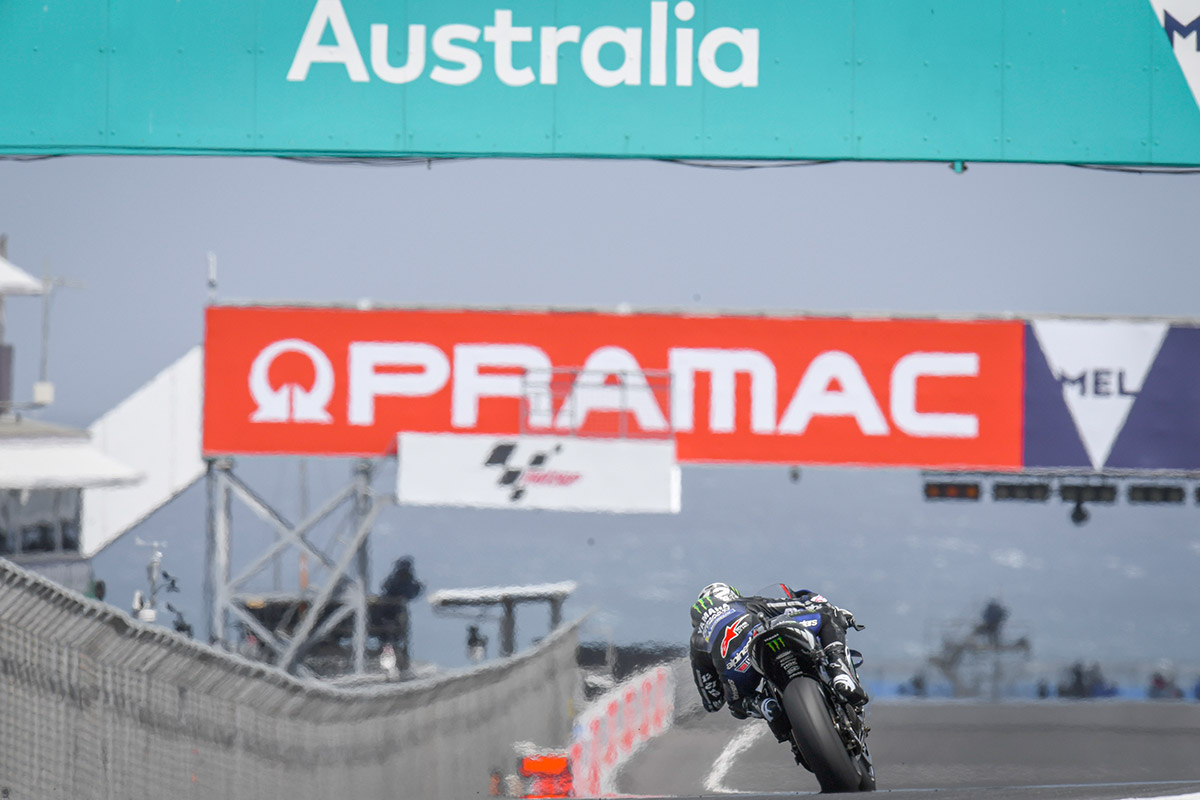 After conditions at Phillip Island deteriorated on Saturday afternoon at the Pramac Generac Australian Motorcycle Grand Prix, FP4 was suspended pending a decision on whether or not to continue in the high winds hitting the Island. Race Direction, in consultation with the riders at a Safety Commission meeting, decided to cancel the day’s remaining track action and that creates a first: qualifying on Sunday.

The lightweight and intermediate classes had already headed out to decide their grids but by the time MotoGP™ were back on track, the ever-increasing wind put paid to the program – so the combined timesheets therefore remain the same. Maverick Viñales (Monster Energy Yamaha MotoGP) is fastest ahead of Andrea Dovizioso (Ducati Team) and Cal Crutchlow (LCR Honda Castrol), with no one improving in FP3 and entry to Q2 unchanged from the provisional glimpse we got on Friday.

There was some news from Saturday before the weather got worse, however, as Fabio Quartararo (Petronas Yamaha SRT) got back out on track after his crash in FP1. The Frenchman sat out FP2 yesterday due to the medication he was given after hitting his left foot in the crash, and was to be reviewed before heading out on track this morning. Deemed fighting fit to continue, he did just that and improved his laptime – although that was somewhat a given given his fastest FP1 effort was set in the wet.

The Frenchman will be back out with the rest of the field at the slightly different time of 9:50 (GMT +11) on Sunday morning, before Q1 then beckons the rookie for the first time. That begins at 10:20am, before Q2 decides the grid just after. The race time remains unchanged from the 15:00 (GMT +11) original schedule.

For the first time since Le Mans, title contender Jorge Navarro (Beta Tools Speed Up) will launch from pole position at the Pramac Generac Australian Motorcycle Grand Prix. The rain started falling in the final five minutes of the Q2 to prematurely end any push for the top, with Brad Binder (Red Bull KTM Ajo) and Q1 graduate Luca Marini (Sky Racing Team VR46) the confirmed as joining Navarro on the front row. Augusto Fernandez (Flexbox HP 40) was the key name to lose out as he starts 16th on a pivotal weekend.

Rain fell on and off for much of Saturday on the Island, but for 10 minutes of Moto2™ Q2, the riders were able to at least set some dry lap times. The initial benchmark was set by Red Bull KTM Tech 3’s Marco Bezzecchi but as the riders gained confidence in the cold and wind, pole position was changing constantly. Championship leader Alex Marquez (EG 0,0 Marc VDS) was the next man on top of the pile, before Marini then led the way by just 0.004 over Binder.

Personal best and session best sectors were lighting up the timing screens, but no one was going faster than Navarro. The Speed Up rider took provisional pole position by 0.3 after Binder had just taken top spot, and it was timed to perfection. With just over five minutes to go in Q2, heavy rain started to fall in the first sector and put an end to everyone’s hopes of improving their times, guaranteeing Navarro pole for the third time in 2019. Both he and fellow front row starters Binder and Marini can all stop Marquez from claiming the title this weekend, setting us up for another classic.

Fabio Di Giannantonio (Beta Tools Speed Up) will be wanting to get involved in the fight at the front too as he made sure both Speed Up machines were in the top four – just 0.002 off the front row in P4. Fellow rookie and Free Practice pacesetter Jorge Martin (Red Bull KTM Ajo) would have been hoping for a maiden pole and although the weather put a stop to that as the reigning Moto3™ World Champion qualified fifth, it’s his second-best qualifying position of the year. Lining up alongside Martin will be compatriot Marquez as the title favourite set the seventh fastest time in Q2, but the man in P6, Sam Lowes (Federal Oil Gresini Moto2), has to start from the back of the grid because of irresponsible riding in FP2, so Marquez moves up a place to Row 2.

Phillip Island specialist Jesko Raffin (NTS RW Racing GP) had a fantastic Q2, he’ll spearhead the third row for Sunday’s intermediate class race after the Swiss rider put in his best qualifying of the year by some distance, with Bezzecchi alongside him in eighth place ahead of fellow KTM rider Iker Lecuona (monday.com American Racing). Second in the Championship Tom Lüthi (Dynavolt Intact GP) will need a good start on Sunday from tenth, a few places adrift of Marquez.

Marcos Ramirez (Leopard Racing) will start the Pramac Generac Australian Motorcycle Grand Prix from his first ever pole position at Phillip Island, with the Spaniard coming out on top on a cold and windy Saturday Down Under to hit the landmark. Aron Canet (Sterilgarda Max Racing Team) made a late leap up the timesheets to take second, with 2018 Phillip Island winner Albert Arenas (Gaviota Angel Nieto Team) completing the front row.

Some early drama hit the field in Q1, with a bike dropping some fluid and a good few then affected by the track conditions just behind. The Red Flag therefore came out and everyone headed back in – riders all ok – as work began to get the track ready to race once again. Once conditions had improved and the green light was back on, it was Tom Booth-Amos (CIP – Green Power) setting the pace.

Wind, spots of rain and the delay couldn’t deter the majority from a final push, however, and there were tense times for the Brit as red sectors lit up the timing screens in the final few seconds of the session. Can Öncü (Red Bull KTM Ajo) emerged on top, with Tony Arbolino (VNE Snipers) slotting into second ahead of Jaume Masia (Mugen Race). Booth-Amos was pushed down to fourth, but nonetheless joined the other three in going through into Q2, a first for him.

Come Q2, everything went down to the wire in a mad Moto3™ rush, although a few were sidelined a little earlier than they would have wanted: Arbolino suffered an issue and pulled off and Motegi polesitter Niccolo Antonelli (SIC58 Squadra Corse) took a tumble at Doohan corner, taking them out the fight for pole. As the laps kept coming in, the two were pushed down the order in an expensive session – Arbolino to P13 and Antonelli to P18, although the latter will leapfrog Stefano Nepa (Reale Avintia Arizona 77) after a grid penalty for the number 82. Antonelli also has to be reviewed before Warm Up to check if he’s fit to race.

In the final shuffle, it was Ramirez on provisional pole and Ramirez still very much on a charge – but there were plenty of red sectors on the timing screens. Ultimately the Spaniard would hold onto it, crossing the line to improve once again as Arenas followed him home. But Canet was coming, and the Spaniard was glued onto the rear of key rival and Championship leader Lorenzo Dalla Porta (Leopard Racing). Would it be enough for pole?

Not quite, but the number 44 shot up to second to take a front row start and is the lead title contender on the grid, with Dalla Porta pushed down to sixth.

Gabriel Rodrigo (Kömmerling Gresini Moto3) was 11th ahead of Tatsuki Suzuki (SIC58 Squadra Corse), with Arbolino in P13 after his issue. Booth-Amos took a career-best 14th ahead of Jaume Masia (Mugen Race), who crashed – rider ok. Öncü, Nepa and Antonelli were the final three in the session, although Nepa takes his penalty.