Albert Arenas takes to the podium in Australia, DNF for Raul Fernandez 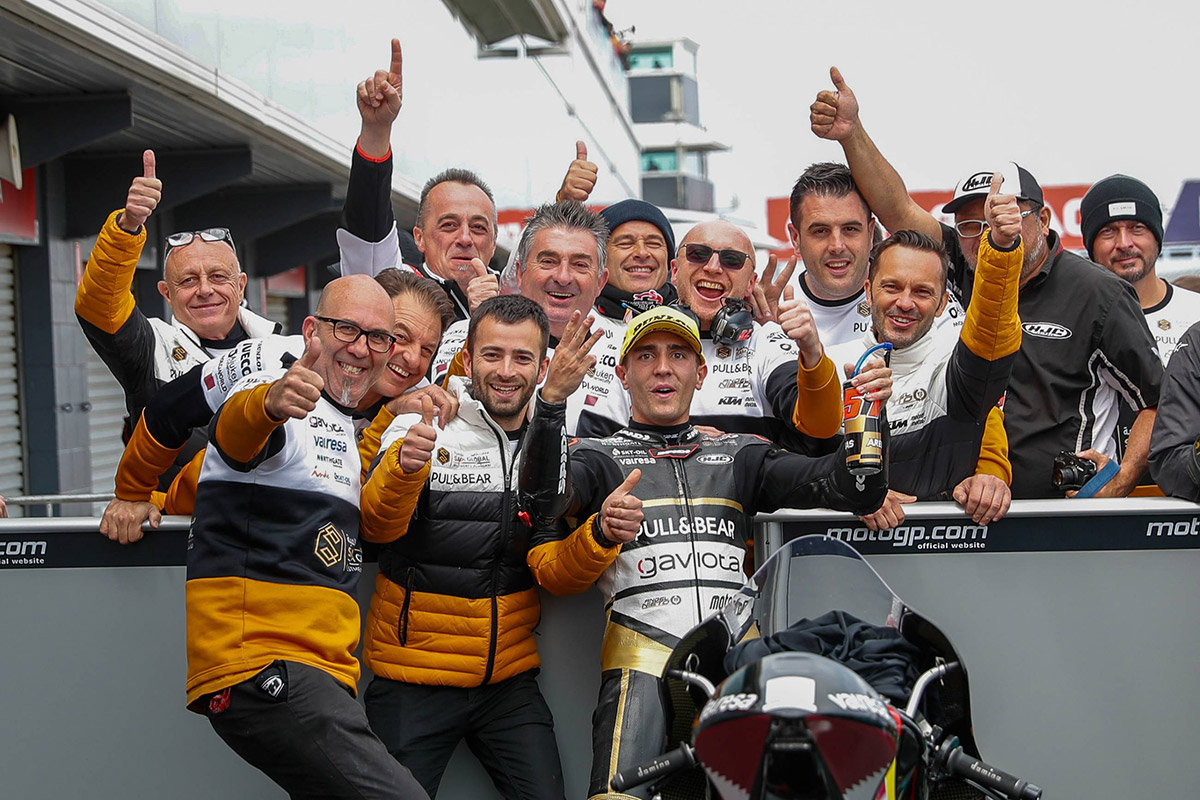 Albert Arenas is using the final part of the season to make a clear statement of intent for 2020, the Gaviota Ángel Nieto Team rider proving he is now ready to battle for glory after his third consecutive podium in Australia today. After a win in Thailand and second place in Japan, the Spaniard was third at Phillip Island today but he crossed the line just 0.088 seconds off the win and 0.011 seconds off second place, following a huge group race that saw twenty riders locked together in the early stages.

Arenas was smart to avoid trouble and make sure he was there at the end, when he fought for the win until the final corner, coming out tucked in behind Lorenzo Dalla Porta but narrowly unable to make up enough ground on the straight. His third straight podium cements Arenas’ position in the championship top ten and even puts him in reach of the top six with two races to go this season.

Lorenzo dalla Porta claimed the Moto3 World Championship in style, taking the victory as his main rival Aron Canet crashed out of contention on the start of the third lap. Dalla Porta and Arenas were joined on the podium by pole setter Marcos Ramírez, the young Spaniard now closing in on third in the championship.

It is common to get a group race in the Moto3 class in Australia with the riders two, three or even four abreast in some of the corners. For Raúl Fernández this was his first experience of Phillip Island but the Gaviota Ángel Nieto Team youngster battled for a place in the lead group of twenty, at one stage crossing the line in the points positions and challenging for the top ten at other points around the track. However, contact with another rider made him hold off from attacking further until late in the race, but Fernández was denied that chance when he was hit by a rival and left with no chance.

3rd Albert Arenas:
“This podium feels really good. It was a crazy race, one of the toughest I have been involved in, but the bike was working well and I could ride how I wanted. Since Thailand I have felt capable of anything and today I could pass on the inside, on the outside, and hold my position at the front throughout. I had the odd moment where there was contact and I lost positions but we made it in the end and it feels good. I fought for the win to the finish but we just came up short. I was stuck to Dalla Porta coming out of the last corner but it just wasn’t possible to pass him. I can’t ask for more, though. I feel in harmony with the bike right now and whilst the results are coming I am also learning a lot. Hopefully everybody at home enjoyed that one.”

Raúl Fernández (DNF):
“The race went well and badly at the same time. I spent the whole time with the group and I was up in the top ten in the early laps. Then I was pushed wide and decided to hang at the back, saving my tyres until the end. It was a shame that I was then hit by another rider from behind and crashed.”