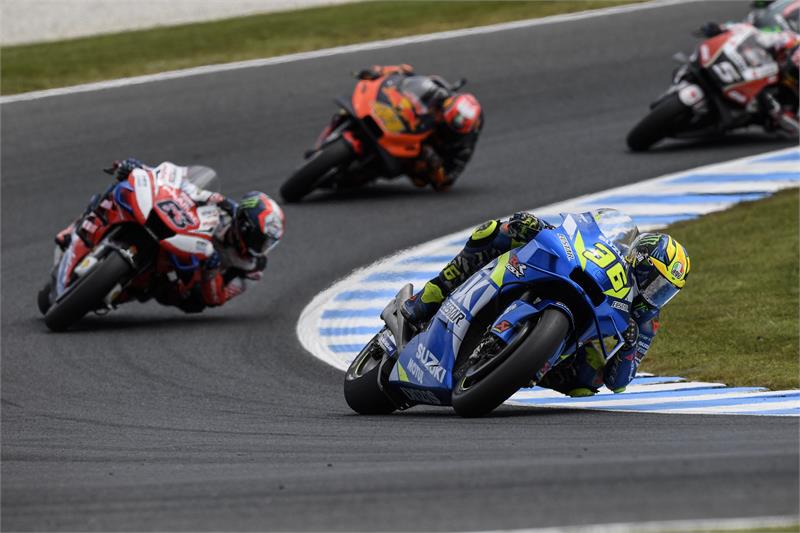 Just one week after the Japanese GP it was time to chase the chequered flag again, and Phillip Island played host to a tense and fiercely contested 27-lap Grand Prix.

Team SUZUKI ECSTAR’s riders got off to a good start, despite Alex Rins receiving contact from another rider on the opening lap. The Spaniard quickly recouped and set the fastest lap on the third lap of the race. Determined to get in the mix, he began to fight it out on the edge of the lively Top 5 group. With 15 laps to go he had made it into 4th place but he soon began to lose feeling. Despite his eagerness to finish at the front of the group, Alex had to settle and conserve his tyres. He finished the race in 9th place and retains 3rd place in the championship standings, as both Viñales and Petrucci failed to finish.

Meanwhile, rookie Joan Mir was enjoying working his way up through the field following his 13th place grid spot. Mir took his time and chipped away at the busy group in front of him, picking off fellow riders one by one. As the laps ticked by he found himself able to stick close to the battle for 4th, and on the final straight he got very close to snatching a podium. In the end the youngster took an impressive 5th, his best MotoGP finish. He also climbs up one place in the standings to 12th.

Joan Mir:
“It was a good race today. I’m so happy about the work we’ve been doing behind the scenes, all the steps we’re taking are helping a lot. It’s a shame the conditions weren’t more settled during the weekend, because in the dry I felt really good and I got my best MotoGP result. I wish there had been one more lap today – I was getting close to the podium! But finally, it looks like the better results are coming, I feel great with the bike.”

Alex Rins:
“I’m a bit disappointed because there have been several races where I’ve had really strong and consistent pace – not winning pace because Marc is hard to beat, but podium pace – and I have not been able to convert it to a top result. Today I feel like I could have gone with Cal but it was difficult because I started far down the grid and had to fight a lot. We really need to work on qualifying, being on the front two rows is so crucial. This turned into a sort of ‘survival’ race, and I just had to get the best finish I could. Anyway, I’m ready for Malaysia next week.”