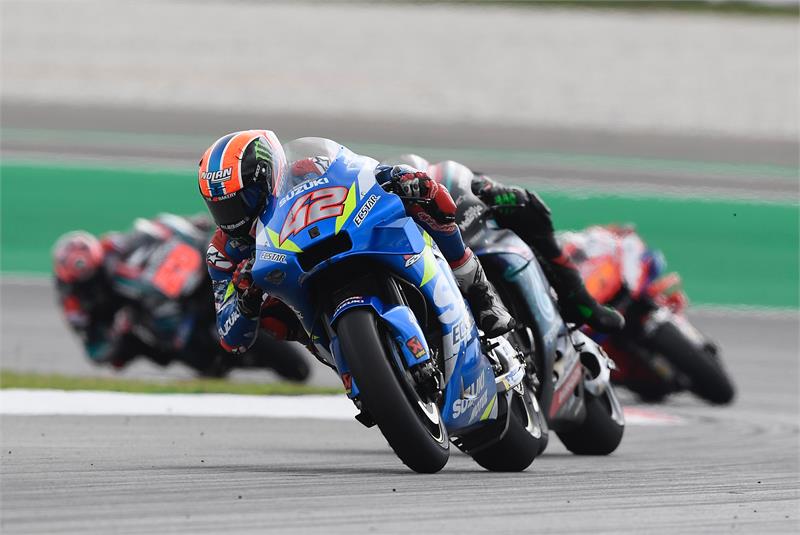 Sepang International Circuit hosted the final in a three week long series of back-to-back races, and the penultimate round of the 2019 MotoGP World Championship. A bumper crowd packed out the Malaysian circuit as temperatures soared to over 30 degrees Celsius.

Team SUZUKI ECSTAR came into the 20 lap race in a positive mood after a strong morning Warm-Up session which saw Joan Mir top the time sheets.

Alex Rins managed to hold his grid position of 7th in the early laps of the race, and he slotted into the feisty lead group. He soon made his way up to 6th, but seven laps into the race he was involved in a collision with Jack Miller at Turn 15, although the pair both stayed upright, Alex sustained damage to his aerodynamic fairing, with one of the aero ‘wings’ snapping off.

One lap later he went into 5th place and began pursuing the battling duo of Rossi and Dovizioso ahead of him. Despite the damage, Rins impressively pushed on, getting very close to the podium. As the laps ticked on and the levels of grip on the circuit dropped off, Alex completed the race with an important 5th place. This result keeps him in the hunt for 3rd in the Championship.

Meanwhile, Joan Mir struggled a little in the early laps as he dropped to 15th place. However, the rookie was keen to progress up the order, and seven laps into the race he had already moved into 12th. His pace and rhythm continued to improve throughout the race, and he set his fastest lap of the race – Top 3 pace – with 9 laps to go. Joan swiftly made his way into a strong 8th place, despite suffering physically, but an incident involving Johann Zarco saw him receive a long lap penalty. The Mallorcan lost two positions but adds another Top 10 finish to his tally.

Alex Rins:
“It was a really difficult race because it was so hot and humid, but I tried to give my maximum. I felt a lack of traction at the beginning of the race, but it got better after a while and I was eventually able to catch Valentino and Dovi. In the end it wasn’t possible to over-take them, but I’m still pleased to bring home 5th. I’m really looking forward to going to Valencia, I hope we can enjoy the race there.”

Joan Mir:
“This was the hardest race of my life, physically I suffered a lot and I found I couldn’t breathe very well. This stems from the lung injury I sustained in Brno, in these humid conditions I find it very hard and it shows I’m not quite fully recovered. This affected my race, but in the end I could get another Top 10 and it’s all good experience for me. It will be nice to go home now and prepare for the final race in Spain.”