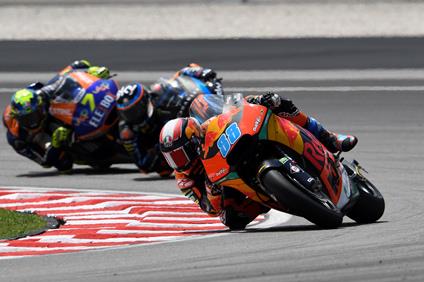 The Red Bull KTM Ajo Moto2 team wrapped up their work at the final round of an intense flyaway triple header with a win at the Malaysian Grand Prix courtesy of Brad Binder, who achieved his second consecutive victory. Jorge Martin was unable to finish the race on this occasion, after a crash in the early running as he battled to reach the front group.

Martin, had a tough day. Despite having been highly competitive throughout the weekend, the Spaniard could not finish the race. Starting from the second row of the grid, Jorge suffered a crash without any serious consequences on the third lap, when he was in eighth position, fighting to chase down the front group. Martin is now 12th in the Championship, with 83 points, and still in with a shot of winning the Rookie of the Year award.

The Red Bull KTM Ajo team will conclude the 2019 season at the Valencia GP, which will be held at the Ricardo Tormo Circuit from 15th – 17th November.

“It was not a positive day for us. I was very motivated at the start, but on the first few laps my feeling with the front was not helping and I was close to crashing on every corner. It’s a shame after a weekend in which I’ve always been in the Top 6. I hope we can keep up the pace that we had at these last few races in Valencia, as I think we are showing that I’m among the fastest riders now. We will try to get a strong result to finish the season.”