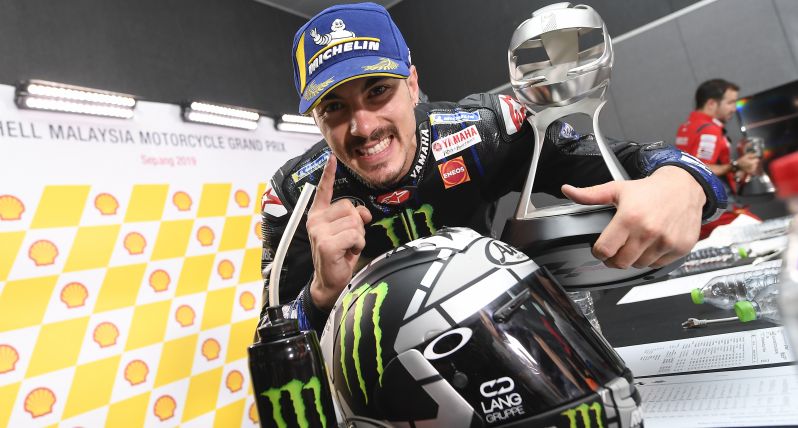 The Monster Energy Yamaha MotoGP Team are celebrating their second victory of the season today, as Maverick Viñales returned to the top step of the podium with a flawless race at the Sepang International Circuit.

Viñales did exactly what he had planned yesterday. He had a good start, hung on in second place through the first corners and soon battled his way to the front. Once he hit the number-one spot, the Spaniard was off and gradually built a solid lead of 1.5s.

The number-12 rider’s campaign was all about focus. Riding on his own in the hot and humid Sepang conditions, he had to remain fully concentrated as he set the pace and managed the gap to Marc Marquez in second place. Viñales didn’t put a foot wrong all race and took a text-book victory, with a 3.059s advantage over second.

The Yamaha rider dedicated the win to the late Indonesian rider Afridza Munandar, who was his favourite in the Idemitsu Asia Talent Cup. Yamaha once again extend their sincere condolences to the family, friends, and loved ones of Munandar.

The team will now enjoy a week’s rest after three consecutive GPs, before they return to action at the Circuit Ricardo Tormo for the Gran Premio de la Comunitat Valenciana, held from November 14th – 17th.

“It was an incredible race. We prepared for the race really well all weekend. I felt I had a big potential after the first lap. I took the lead after the first two splits and I kept pushing, pushing, and pushing. Honestly, I’m so happy. We did a good job. What a shame in Australia, because that was a race where I felt I had a lot of potential too, but being in first place here is amazing. I would like to dedicate this race to Munandar, the kid that passed away yesterday. He was my favourite in the Idemitsu Asia Talent Cup. I offer my condolences to all the family.”