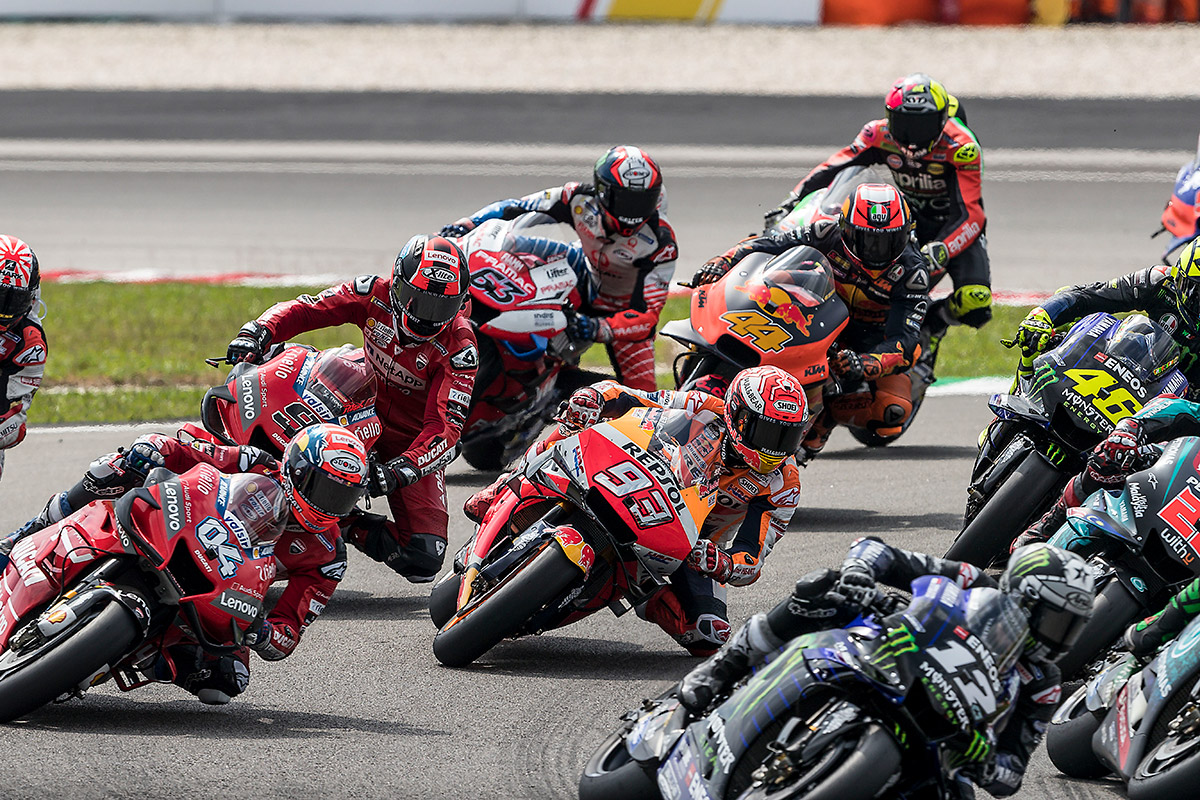 Comeback-king Marc Marquez continued to break records in Sepang, his 395 points after finishing second becomes the highest points scored in a single MotoGP season. Jorge Lorenzo, the previous holder of the record, returned to the points with 14th.

After the unfortunate loss of Idemitsu Asia Talent Cup rider Afridza Munandar on Saturday, the MotoGP Championship rallied together to remember him with fantastic racing at the Sepang International Circuit.

There was no stopping Marc Marquez who bounced back from his biggest crash of the year to put in a champion’s performance. Lightning off the line, the 55-time MotoGP race winner gained six positions in the first two corners alone and ended the first lap in second place. With nine places gained, the reigning World Champion settled in behind Jack Miller for a short while. After muscling past the Australian, Marquez began to work on closing the 1.6 second gap to Viñales.

With the gap not reducing after several laps in the 1’59s, Marquez eased his pace to take a well-earned second place in the blazing Malaysian heat. Returning to Europe with 395 points, Marquez now holds the record for most points scored in a single season and passes Jorge Lorenzo’s record of 383 World Championship points from 2010.

The result in Malaysia also earns Marquez the honour of being the first rider in history to score 17 MotoGP class podium finishes in a single season, extending his unbroken run of top-two finishes to 15. Marquez’s last finish outside of the top two came at the Czech GP in 2018 when he was third.

Sunday in Sepang proved to be more difficult than predicted for Jorge Lorenzo, but the Repsol Honda Team rider was able to return to the points for the first time since Misano with a 14th place finish. The result also saw him halve his distance to the winner compared to Phillip Island, a return to the form he showed in Motegi.

With both riders in the points, the Repsol Honda Team sit just two points behind the Ducati Team in the Team Championship with one round still to go as they hunt the Triple Crown.

Both Marc Marquez and Jorge Lorenzo will attend Honda’s EICMA presentation in Milan. Then, after an intense period of four races in five weeks, teams and riders are afforded a week off before the final round of the 2019 MotoGP World Championship begins in Valencia on November 14.

Marc Marquez
2ND
“It was an incredible race, a great first lap. Maybe the best of my career, alongside Mugello 2015 – I watched this lap last night to see what I did! It was a very nice first lap but unfortunately the tyre dropped a lot in those first three laps and I lost a little time with Miller. Viñales was faster than us today and the target was the podium. I tried to do like in Phillip Island and stay right behind him but the gap was too big at 1.1 seconds and I made a mistake and dropped back. I’m happy with my race, but you can’t imagine how happy I am for my brother’s victory – he deserves it so much. It’s an incredible day but we also have to remember Munandar, a young and talented rider who we unfortunately lost. A big hug to his family and friends.”

Jorge Lorenzo
14TH
“At the start of the race it was very difficult with the other riders around, the turbulence disturbed my pace a lot. But there are some positives because I was able to be within seven tenths of my best lap time for the whole race. Obviously, we are still not fast enough but we are getting closer and closer to the goal of being 30 seconds from the winner after my crash in Assen. The two points we earned are important to help the team fight for the Team Championship in Valencia, this is the main objective now.”