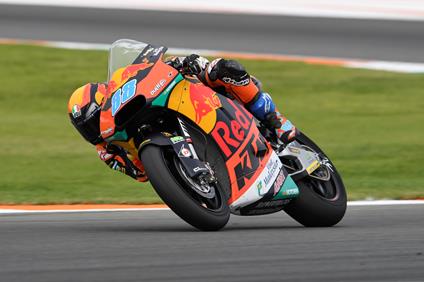 The Red Bull KTM Ajo wrapped up the 2019 season in style on Sunday with another victory at the Valencia GP, thanks to a fantastic performance by Brad Binder. A third consecutive race win for the South African rider secured him the runner-up spot in the 2019 Moto2 standings, just three points behind the World Champion. Jorge Martin finished in a hard-earned fifth position, completing a fine finale to the year for the team.

The Moto2 race, which was reduced to 16 laps – following a series of incidents and the restart in Moto3 – would ultimately go down to the wire, with Binder completing a late overtaking move on the penultimate lap, to give him his fifth victory of the season.

For his part, Jorge Martin took off well from the front row of the grid and grabbed the lead on the first corner. The Spaniard initially held onto first place, but a brief run off track on the second lap saw him drop back several places. Martin went on to ride at a solid pace which would see him eventually cross the finish line in a positive fifth position. The result sees the 2018 Moto3 World Champion end his rookie year in Moto2 11th, with 94 points.

The Red Bull KTM Ajo team is now already focused on the 2020 season; they’ll participate in two days of testing at the Jerez-Angel Nieto Circuit next week, on 20th and 21st of November.

“Today was a tough race for us. However, I’m very proud with how the year has gone in general, as we have improved from the beginning. I think today we got the tyre choice wrong, but I gave it everything and finally we achieved a Top 5 result. It has been a year of learning and I’m satisfied with my progress over the entire season. I’m happy with my team and I’m looking forward to 2020, with new goals and the motivation to keep working hard.”