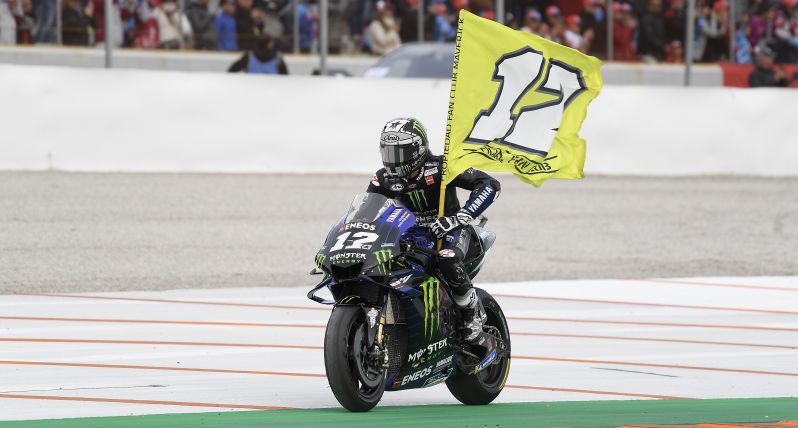 The Monster Energy Yamaha MotoGP Team wrapped up the 2019 MotoGP World Championship today at the Circuito de la Comunitat Valenciana – Ricardo Tormo. In the cold but perfect conditions, Maverick Viñales and Valentino Rossi struggled to put in overtakes due to a lack of rear grip and finished in sixth and eighth place respectively. However, these important championship points earn Viñales third place in the final rider standings and helped maintain Monster Energy Yamaha MotoGP’s third place in the 2019 Team rankings.

Viñales had a good start, moving up a position from fourth on the grid in the first corner, but the busy opening laps were challenging. The low track temperatures meant it took him a long time to get heat into the tyres. By lap 4 he had fallen back to seventh place.

The Spaniard bided his time until, with 13 laps to go, he started to ask questions of Franco Morbidelli, inching closer to the back of the satellite Yamaha. Five laps later, the Italian crashed out in front of Viñales in Turn 4, moving the number-12 rider up to sixth. He made sure to bring his YZR-M1 safely across the finish line, 8.829s from first, to end the 2019 MotoGP Championship in third place, equalling his best premier class season result from 2017 (also with Yamaha).

The Monster Energy Yamaha MotoGP Team will be back in action at the Ricardo Tormo circuit on Tuesday for the first Official IRTA test of the 2020 pre-season.

“Actually, my main objective was to try to be third in the championship. We did it today, we forgot a bit about being on the podium or winning. My objective was to finish the race well. It was a difficult race, I struggled a lot with the rear grip, which happens sometimes for us and today again, so we have to check that. Today I was very concentrated on finishing close to Rins and trying to get the maximum points. I’m very pleased to be the first Yamaha and to be inside the top 3 again. I can’t wait to test the new bike. We face this new test season with a lot of motivation, a lot of enthusiasm, and that is the most important. We have very important tests coming up here and in Jerez, and I feel great on the bike. So, we need to create a good atmosphere again and keep challenging, because I think with Yamaha we can do a really good job this winter and prepare for next year.”