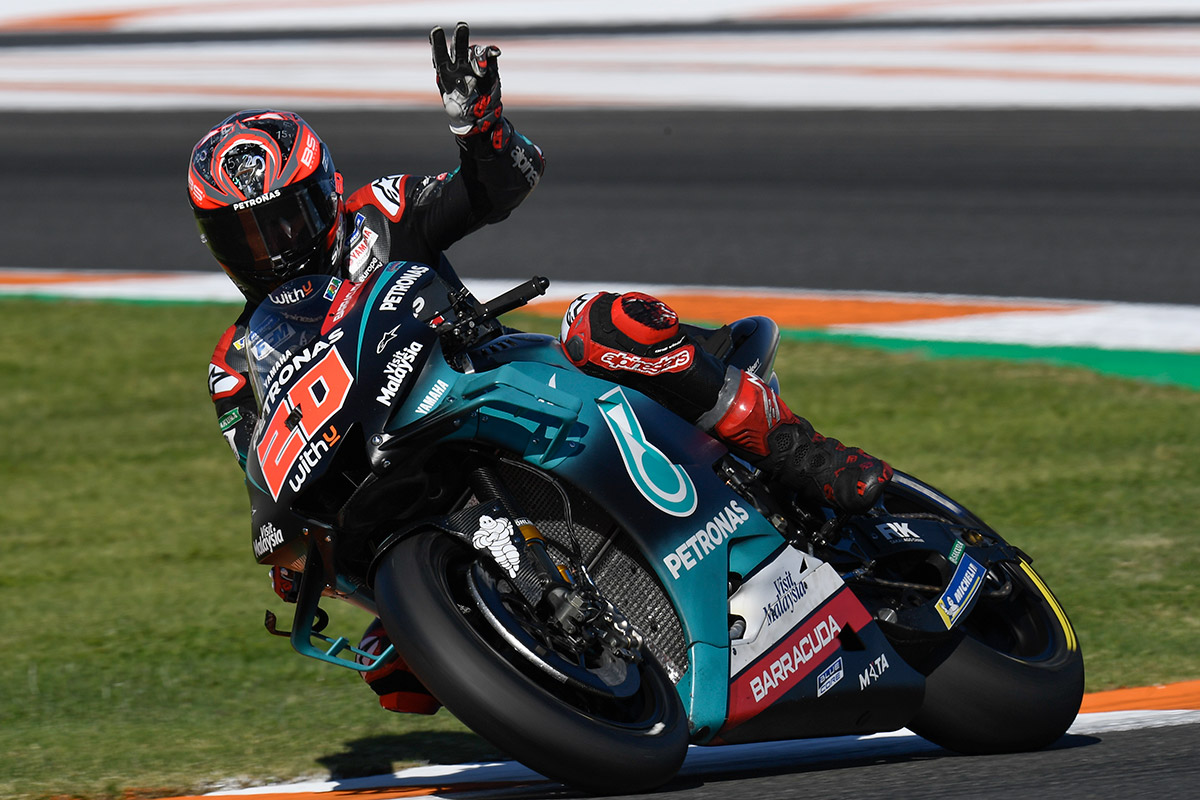 It was a Yamaha 1-2-3 on Day 1 of the Valencia Test at the Circuit Ricardo Tormo, but one man was ahead of the rest: Fabio Quartararo (Petronas Yamaha SRT). The Frenchman ended the day top of the pile after 82 laps, the fastest of which was two tenths off his pole: a 1:30.163. Maverick Viñales (Monster Energy Yamaha MotoGP) was second and 0.164 off after 66 laps, with Franco Morbidelli (Petronas Yamaha SRT) completing the top three but a few more tenths in arrears.

At Yamaha, 2020 therefore began with a bang. Monster Energy Yamaha MotoGP riders Viñales and Valentino Rossi – who was ninth – had a new chassis, engine and notably different air intake. Rossi’s new Crew Chief, David Muñoz, was on hand as well as the team enjoyed an addition of a slightly different sort. Petronas Yamaha SRT’s Quartararo and Morbidelli, meanwhile, tried the carbon swingarm, and Quartararo tried some aero new to him, but not to Yamaha.

Andrea Dovizioso (Ducati Team) was fourth quickest and only 0.015 off Morbidelli after 58 laps, with the biggest headline from the Borgo Panigale factory proving a new chassis. Danilo Petrucci also stole some limelight for tougher reasons, with the Italian only putting in 10 laps due to pain in his shoulder exacerbated by his crash during the Grand Prix. Nevertheless, he was 12th overall. Jack Miller (Pramac Racing) was tenth after an apt 43 laps, trying some new parts but the full package is expected by the Jerez test. Ducati test rider Michele Pirro was on the other side of the Pramac garage, with Francesco Bagnaia remaining sidelined following his crash during the GP weekend.

Honda, meanwhile, were fifth with reigning Champion Marc Marquez (Repsol Honda Team). He put in 60 laps although one was cut short as the number 93 crashed, scattering a few parts through the gravel. The biggest news at Honda was a new chassis though, as well, of course, as the arrival of Alex Marquez. The number 73 was at LCR Honda and had an early crash later replicated by test rider Stefan Bradl at Turn 10, although Alex completed 53 laps by the end of the day. Cal Crutchlow (LCR Honda Castrol) was 11th and did 69 laps working towards 2020.

Suzuki locked out sixth and seventh on Day 1 with Joan Mir (Team Suzuki Ecstar) leading teammate Alex Rins. The former did 63 laps and the latter 76. The Hamamatsu factory had a new engine previously tested by test rider Sylvain Guintoli, and that’s what Alex Rins set his fastest lap with.

KTM were all hands on deck: a new chassis, different engine spec, a new steering damper and work focusing on electronics, fairing, winglets, seats kept them busy. The new chassis – still a tubular steel frame – is aimed at improved adaptability. Pol Espargaro (Red Bull KTM Factory Racing) was tenth and did 58 laps. New teammate Brad Binder was also a big addition for the Austrian factory and he put in 70 laps as a new era in his career begins.

Red Bull KTM Tech 3 also had a new kid on the block, although he’s taken part in his first Grand Prix: Iker Lecuona. The Spaniard was impressive once again, despite a crash, and ended the day in 13th after 57 laps. Dani Pedrosa was on track for KTM too, putting in 52 laps and based in the Tech 3 garage as Miguel Oliveira remains absent through injury.

At Aprilia Racing Team Gresini, there was nothing new as yet, with work focused on improving electronics and engine braking. Andrea Iannone did 54 laps and was 14th, Aleix Espargaro did 45 laps and was 16th. Test rider Bradley Smith was also on track and caused a Red Flag with a crash, rider ok, but he did complete 50 laps for the Noale factory.