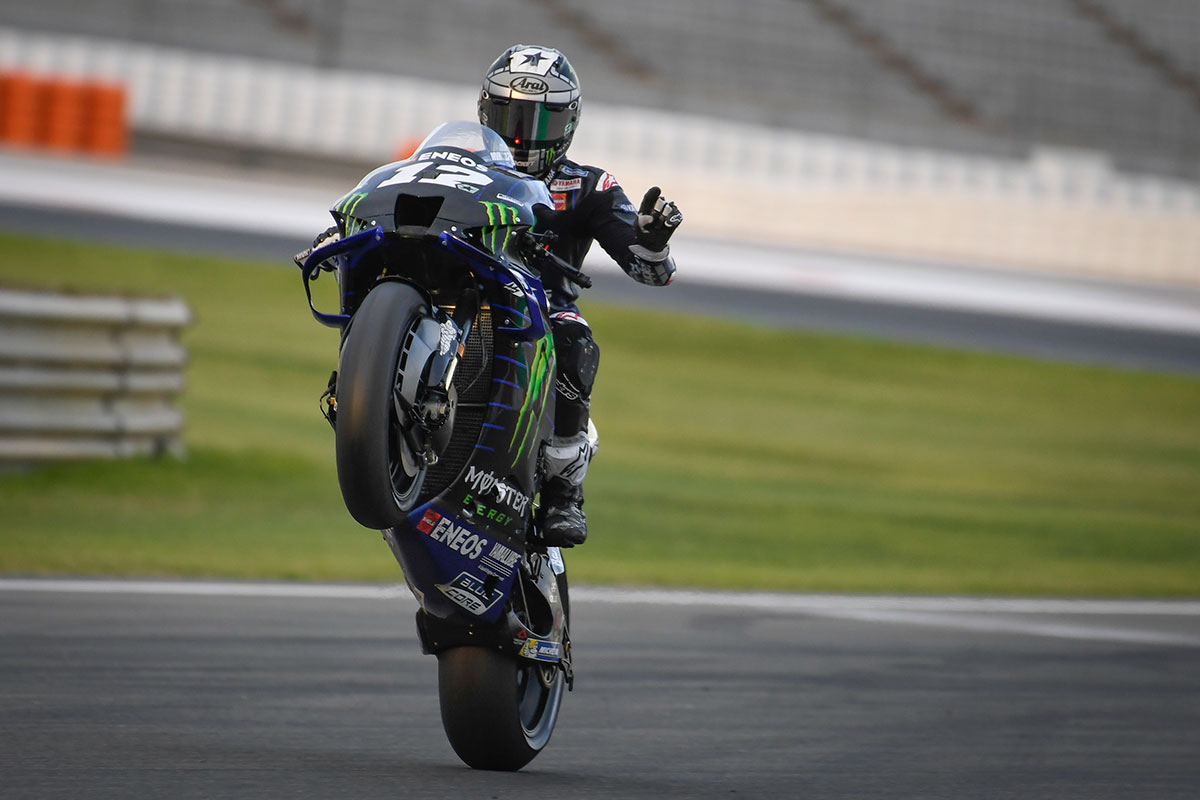 Maverick Viñales (Monster Energy Yamaha MotoGP) topped Day 2 of the Valencia test and it was once again a Yamaha 1-2-3, with the trio at the top within three tenths. Viñales was the only rider in the 1:29s – true of Fabio Quartararo (Petronas Yamaha SRT) at the weekend – and the number 12 narrowly beat the Frenchman’s pole time on Wednesday. Quartararo was 0.164 in arrears, with Franco Morbidelli (Petronas Yamaha SRT) within 0.265 of the top. Honda’s Cal Crutchlow (LCR Honda Castrol) was the only other man within half a second…

Viñales fastest was set on the ‘new’ bike – with a different chassis and new engine – and the Spaniard put in 67 laps on the final day of testing, topping the timesheets with his 56th. Teammate Valentino Rossi was once again ninth, and ‘The Doctor’ did 68 laps on Wednesday. He was within 0.968 of the top and suffered a mechanical problem in the afternoon, but got back out.

Quartararo and Morbidelli, meanwhile, didn’t say much about what they were working on – “some small things” and the Frenchman said it was more a day of riding than testing as yet. For a man only just starting his second season, the 64 laps were doubtlessly useful, however, and Morbidelli added another 52 to the team’s count.

For Crutchlow it was a mammoth day of work. The Brit headed out on the ‘2020’ bike, suffered a crash but managed to prove Yamaha’s closest competitor on the timesheets and improve his laptime from the weekend after 73 laps. Speaking of the number 73, Alex Marquez, on the other side of the LCR Honda garage, was the only man to do more laps. The rookie did 79 on his second day as an HRC MotoGP™ rider, shaving six tenths off his time from Tuesday.

Reigning Champion Marc Marquez (Repsol Honda Team) made some more Honda headlines, however. The number 93 rode around with his brother AND premiered the aero seen on Crutchlow yesterday, with the all-black Honda breaking cover bearing a 93 in the afternoon, and he ended the day in seventh after 71 laps. He also suffered a failed getaway earlier in the day, and his teammate for the test – in the garage at least – also suffered an issue on Wednesday as Stefan Bradl ground to a halt. Nevertheless the German was able to complete 53 laps by the end of play.

Team Suzuki Ecstar were fifth and sixth on Wednesday. The new engine previously having been put through its paces by test rider Sylvain Guintoli was a big focus for the Hamamatsu factory as they look for a step forward in terms of outright speed, and Joan Mir was the quickest Suzuki on Day 2. He put in a 1:30.427 and did 61 laps, but teammate Alex Rins was just 0.076 off and did 47 laps. They plan to continue testing the engine at Jerez.

KTM stole a few headlines on Day 2. For their speed – Pol Espargaro’s (Red Bull KTM Factory Racing) impressive showing and that of Red Bull KTM Tech 3’s Iker Lecuona – and they had the new kids on the block, Brad Binder (Red Bull KTM Factory Racing) and Lecuona, taking some tips from the veterans. But there were also a few crashes, with each of the three racers all going down. Espargaro first, Lecuona later and Binder even later in the day. Espargaro’s crash, however, led to his fastest lap as he was then forced to switch bike to another new chassis – and found immediate positives. He was eighth and did 46 laps, Pedrosa 14th after 48 laps and Lecuona just 0.045 off the three-time World Champion by the end of play. Binder did 66 laps on Day 2.

The Ducati Team’s Andrea Dovizioso, meanwhile, was focused on gathering more information on what they tested on Day 1, one big thing of note being a new chassis. Some sensors were spotted on the rear of the Borgo Panigale machine too on Wednesday, and the ‘salad box’ was back. Danilo Petrucci, however, was not back. The Italian remained sidelined by his bothersome shoulder, although Michele Pirro was once again on track to put the laps in – 40 of them – and Jack Miller (Pramac Racing) was all action stations too. The Aussie explained he’d been doing back to back comparisons with the first version of the 2020 machines because the number 09 was ruled out. Miller was fastest Ducati in 10th, just ahead of Dovizioso. Tito Rabat (Reale Avintia Racing) was 12th, ahead of Pirro.

For Aprilia, it was another day of track action working with their 2019 machines. Aleix Espargaro was 16th after 43 laps, Aprilia Racing Team Gresini teammate Andrea Iannone in 19th. Espargaro crashed at the final corner, and Iannone ran on at Turn 1 with the RS-GP then catching alight – rider ok. Test rider Bradley Smith was also on track and did another 32 laps to add to the information-gathering tally.

That’s it from Valencia and the first test of 2020 – with Jerez up next as a two-day test takes place on Monday and Tuesday.