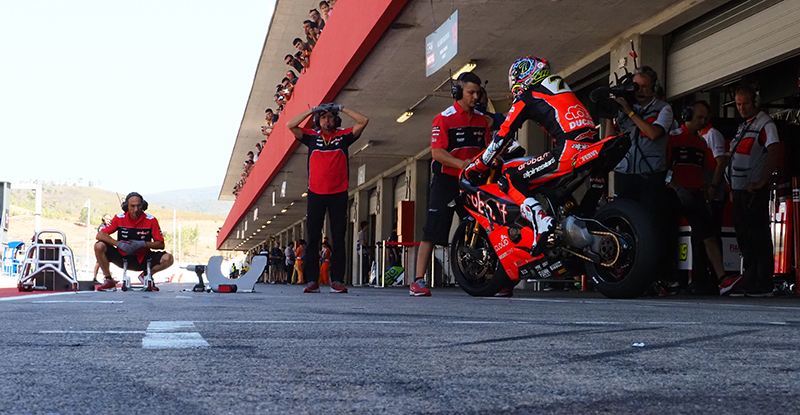 After a rain-affected WorldSBK test at the Circuito de Jerez – Angel Nieto, it is time to head west to Portugal, and the Autodromo do Internacional Algarve and Portimao for testing from the 26th and 27th January. The second test in January will be the final time we get to see most of the bikes on-track at once before the Phillip Island test the week before the first round, meaning that there will be plenty to keep our eyes on as the new season gets nearer.

Portimao came onto the calendar in 2008 and has been a favourite for the riders ever since, with its dramatic undulations, fast straights, sweeping bends and technical sectors. The factors combined make for the perfect testing circuit and with KRT absent, the ARUBA.IT Racing – Ducati squad will be keen to get some running in. Scott Redding and teammate Chaz Davies had contrasting Jerez tests; Redding was quick and constantly in the top three, whilst Davies crashed twice within in the morning of day one. With dry running expected, the next two days will be critical for a valid insight into the 2020 season.

Since their comeback to WorldSBK as a factory manufacturer in 2016, Yamaha haven’t enjoyed such a strong pre-season. The PATA YAMAHA WORLDSBK OFFICIAL TEAM have been a constant threat to Kawasaki and Ducati and have packed out the leading positions across numerous tests. Michael van der Mark and Toprak Razgatlioglu looked to be the riders to beat at Jerez at various points and will now get to bring their 2020 engine and 2020 Yamahas to Portimao, a track both riders took podiums at in 2019.

In what has so far been a quiet pre-season, the BMW Motorrad WorldSBK Team will also be present at Portimao and look to really shine through with the sun expected. Tom Sykes and Eugene Laverty have both enjoyed strong results at the track before and with plenty to test, both are anticipated more positives across Sunday and Monday. Having stated back at the Jerez test that focus needs to go on the engine, Eugene Laverty will be looking for more power in Portugal, whilst both he and Tom Sykes will continue working through their schedule regarding which chassis to use.

They topped day one at Jerez and had an equally positive second day, but the HRC Team will now take to the Portimao circuit and continue their 2020 pre-season testing programme. Whilst exactly what they are testing has been kept under wraps, the bike has already come out of the box in a competitive nature. Leon Haslam was a regular fixture inside the top three over the Jerez test, whilst Alvaro Bautista enjoyed top ten pace despite a small crash. Can the perform well again at Portimao?

With no KRT squad, attention turns to the Independent riders; an impressive Jerez test for the GRT Yamaha WorldSBK Junior Team gives them plenty to shout about going to Portugal. Federico Caricasulo won in WorldSSP at the track last season and despite suffering a tricky last day of testing at Jerez, he will be eager to get some dry running in warmer conditions under his belt. For Garrett Gerloff, the American will simply be looking to get good track running in dry conditions ahead of the first action at Phillip Island. Loris Baz (Ten Kate Racing – Yamaha) will also be determined to continue his great start to 2020, making incremental steps with the 2020 Yamaha YZF R1.

In terms of the Independent Kawasaki teams, there’s plenty to watch out for as ORELAC Racing VERDNATURA and Kawasaki Puccetti Racing take to the circuit. For the Valencian-based Orelac squad, Chilean rookie Maximilian Scheib will look to carry on bedding in to the WorldSBK paddock. He will be the first rider from Chile to start a full season of WorldSBK, with the adaptation to the ZX-10RR still ongoing. For Puccetti, Xavi Fores will be on Kawasaki machinery for the first time in 2020, having not taking part in the Jerez test. It will be the first time he will have raced a four-cylinder WorldSBK machine in 9 years and will aim to get crucial dry weather running under his belt before Phillip Island.

There are four Independent Ducati teams taking to the Portimao circuit across the two days, starting with the Barni Racing Team heading into the test off the back of little track action at Jerez. The Italian squad are keen to shine in Portugal with Sandro Cortese heading out to ride for the team, whilst Leon Camier will be in attendance and if fit enough, out on the Ducati Panigale V4 R. For Leandro Mercado (Motocorsa Racing), he will aim to continue acclimatising to his Ducati Panigale V4 R and achieve his bid of top ten success in 2020. On the fringes of the top ten at Jerez, the former STK1000 Champion is shooting high in the Algarve.

The other two Ducati teams include Team GOELEVEN and Brixx Performance. Michael Ruben Rinaldi (Team GOELEVEN) suffered a crash at the Jerez test on day one, hindering his progress. At Portimao, the team will work together to try and understand Rinaldi’s riding style, so they can make changes accordingly. Frenchman Sylvain Barrier (Brixx Performance) is relishing the opportunity of being back on the world stage and with a good team behind him, Barrier is far from feeling the pressure. He will continue the shakedown of his Ducati Panigale V4 R in order to be in the mix for positive performances come the start of the season.

The 2020 FIM Supersport World Championship promises to bring more thrilling, fair-bashing action across 13 rounds from all over the World. However, prior to this is the testing season, where the teams and riders get together to familiarise themselves with new bikes and regulations, whilst others try to perfect the packages they already have. Four teams will be in action across the two days in order to improve their packages ahead of the 2020 WorldSSP season.

Starting with the Champions, the BARDAHL Evan Bros. WorldSSP Team and their sole entrant for 2020 Andrea Locatelli will hope to be in action. The team were scheduled to ride at the Jerez test, but inclement weather meant they packed up earlier and headed to Almeria. Locatelli needs crucial miles and with the new regulations stipulating that slick tyres will be used for the first time in WorldSSP, there’s more than just new parts to try out. The former Moto3™ podium finisher has been one of the biggest profiles to come into World Supersport and will look to give the BARDAHL Evan Bros. WorldSSP Team a second teams’ title in as many seasons.

One of the most successful teams in WorldSSP are PTR Honda, rebranded this season as Dynavolt Honda; Simon Buckmaster’s squad picking up new sponsorship for their 2020 World Supersport campaign. With 18 race wins to the team’s name, Hikari Okubo and Patrick Hobelsberger will be in action at Portimao and eager to get to grips with the CBR600RR. The team were consistent top ten runners in 2019 and will hope to move up and challenge for the top six as 2020 unfolds, especially given Okubo’s podium-threatening pace last year.

GMT94 Yamaha had an incredibly strong end to 2019, with Jules Cluzel winning at San Juan and securing a strong podium finish at Losail. Three wins for the 31-year-old three-time WorldSSP runner-up still wasn’t enough to give him the title in 2019 and he will be hoping that the turn of the decade brings luck his way. His teammate for a second season is the flamboyant Corentin Perolari (GMT94 Yamaha), who took his first pole in Argentina. He ended 2019 strongly and with the right amount of testing, he could be a real threat to the title.

The final team that will be testing from the WorldSSP field is the WRP Wepol Racing squad, a new addition to the grid this season. Featuring the only British rider in the field – Danny Webb – the team is managed by double World Superbike Champion, James Toseland. Toseland is back in the paddock at Portimao, a track he raced at only once in 2010. For rider Danny Webb, it is a big opportunity back on the world stage, with him clinching the International Road Racing Championship (IRRC) in 2018.

With plenty to be expected, tested and reviewed, the World Supersport field for 2020 is one of the biggest and best in recent seasons, with 17 nationalities ready to do battle. Add into the mix rookies, new regulations and new circuits, it looks set to be an all-out battle for the entirety of the season.