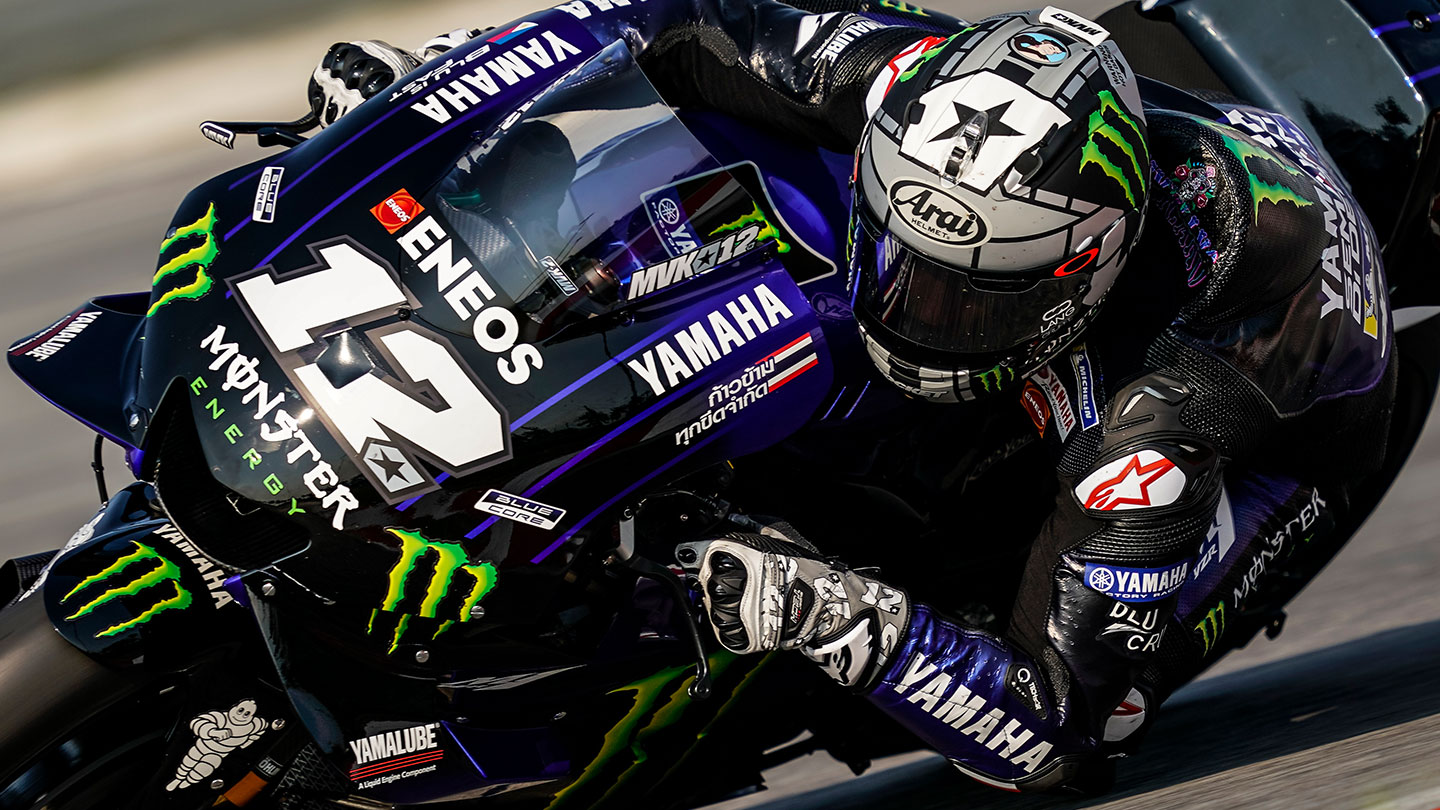 Yamaha Motor Co Ltd. have confirmed Maverick Viñales as one of the Yamaha Factory Racing MotoGP riders for the 2021 and 2022 season.

Viñales has shown great riding, motivation, and consistency so far in his three years of racing with the Yamaha Factory Racing MotoGP Team in the MotoGP World Championship. The successful partnership led to a third place in the overall standings in 2017, a fourth place in 2018, and another third place in 2019.

Further Yamaha highlights on the Spaniard‘s résumé are 6 wins and 19 podiums, including his Yamaha debut race and Yamaha‘s 500th GP win in Le Mans, both in 2017, as well as 9 poles in total out of 55 Grand Prix weekends aboard the YZR-M1.

These achievements on top of his undeniable talent and unshakable determination have Yamaha fully confident in their partnership with the 25-year-old. On 6 February they will start the first MotoGP Test of this year in Sepang, Malaysia, kicking off their 2020 campaign to clinch the premier class title.

LIN JARVIS
We brought Maverick into the Factory team in 2017, knowing he is a special talent. He is highly motivated and dedicates himself to being physically strong and is always ready to give his maximum and extract the best from his YZR-M1. In his first three seasons with us, he has given Yamaha 6 wins, 19 podiums, and 100% of his commitment. Now, as the YZR-M1 is improving race by race, we foresee a very bright future for him at Yamaha. Maverick‘s decision to sign with the Yamaha Factory Racing MotoGP Team for two further years so early shows the strength of our mutual appreciation and underlines the shared conviction that together we can challenge for the MotoGP World Championship Title.

MAVERICK VINALES
I‘m extremely happy because I feel like I get to keep ’my own team‘. This will be the second year with my current crew, and after this I have two more years to look forward to. I‘m so excited! I think that if we keep working really hard we are heading the right way. For me, it was very important to make this announcement before the season started, because I‘m highly motivated and want to be able to fully concentrate on the 2020 season. I don‘t want to spend too much time thinking about the future. There were no reasons not to stay with Yamaha, because they feel like family. Yamaha is giving me a lot of support and, as I said, I have ’my own team‘, which is something I really need. We need to keep working and be very strong. Our main objective is, as always, to be World Champion and try to bring Yamaha the number one honour again. I will try my best. For sure, I will give everything I have to make our team proud too. I would like to say ’Thank you‘ to Yamaha for their faith in me. They are giving me a lot of confidence, and I really have trust in our partnership. I think we will both be growing very fast and we will keep pushing.

Viñales was born in Figueres, Spain, on January 12th, 1995. He began racing in minimotos at just three years of age before moving onto motocross. In 2002 his passion for speed brought him to circuit racing. He competed in the Catalonian 50cc Championship and followed it up with several successful seasons in the 70cc “metrakit” bikes.

He got hold of the Catalonian 125cc Championship Title in 2007, he successfully defended his crown in 2008, and won the Mediterranean Trophy that same year. The following year he also competed at selected events in the German IDM 125GP Championship for RZT Racing aboard an Aprilia RS 125 R, achieving a best result of seventh. In 2009, he moved up to the CEV Buckler 125GP series, partnering with Miguel Oliveira in the Blusens-BQR team. Viñales secured the Rookie of the Year award, finishing as the runner-up to Alberto Moncayo in the championship standings by just four points and claiming four successive podiums during that season.

In 2010, Viñales and Oliveira joined different Blusens teams and battled it out for the CEV Buckler 125GP Championship Title. Despite winning two races to Oliveira‘s four, Viñales won the title by two points, thanks to finishing on the podium at all seven races of the season. The European Championship Title was also decided between the two riders, and again it was Viñales who came out on top.

The Spaniard moved to the 125cc World Championship for the 2011 season with the SuperMartxé VIP team. He impressed during pre-season testing at Valencia and finished ninth on his Grand Prix debut in Qatar. After retiring at Jerez due to a technical issue, Viñales finished fourth at Estoril, narrowly missing out on a podium to Johann Zarco in a photo finish, with a margin between the pair of just 0.002s. Two weeks later at Le Mans, Viñales took his first front-row grid start in third place and went on to seal his first victory by 0.048s at the age of 16 years, 123 days. This incredible performance made him the third-youngest rider to win a Grand Prix race, behind Scott Redding and Marco Melandri. Securing three further victories that same year, Viñales finished his first Grand Prix season in third place in the championship rankings and claimed the Rookie of the Year award.

The youngster went into the 2012 season as the title favourite in the newly formed Moto3 championship. He won five races on the Blusens Avintia FTR Honda early on in the season, but a lack in consistency, some misfortunes, and a dispute with his team resulted in a missed race in Malaysia, which allowed Cortese to win the title and Luis Salom to snatch second in the final standings, with Viñales taking third overall.

The next year, the young gun moved to Team Calvo alongside Ana Carrasco. He won his first two races back-to-back at the Spanish and French Grands Prix and kept his competitive form throughout the season, fighting at the front of the field. Viñales, Rins, and Salom went into the final round with a gap of five points across them all. The championship was decided in Valencia by a battle between Rins and Viñales. In the end, Viñales took the race victory and the Moto3 World Championship Title by a twelve-point margin.

The Moto3 World Champion then signed a Moto2 contract with Pons Racing, joining former title rival Salom. Viñales didn‘t have to wait long for his first intermediate class victory, which came at the Circuit of the Americas on 13 April, 2014. He ultimately finished the season in third place with four wins and nine podiums, earning himself another Rookie of the Year award.

In September 2014, it was announced that Viñales would move up to the premier class for the 2015 season, riding for the factory Suzuki team. Despite being a rookie and riding for a factory that was returning to MotoGP, he had a very good MotoGP season. Scoring points in 16 out of 18 races in a competitive field and under challenging circumstances, the young contender proved to be a notable rider. He finished the season in 12th place, winning again the Rookie of the Year award, thus completing his collection (125cc, Moto2, and MotoGP).

In 2016 Viñales shone anew. He finished third at the fifth round in France, achieving his first MotoGP podium, and it wasn‘t before long that he got to step onto the top of the rostrum. At the twelfth race, the British Grand Prix held at the Silverstone Circuit, he registered his first ever MotoGP win. He finished the season strong with two more third places in Japan and on Phillip Island, to secure fourth place in championship. His talent and strong mentality were undeniable and didn’t go unnoticed by Yamaha, who signed Viñales for the 2017 and 2018 season.

Viñales lived up to the hype. After a very strong debut on the YZR-M1 during the pre-season, the young Spaniard went on to win the first two races in Qatar and Argentina. He later followed up the achievement by securing Yamaha its 500th Grand Prix victory in Le Mans, after a sensational fight with team-mate Valentino Rossi. Despite the season being filled with grip issues, the Spaniard brought in solid points, scoring second places in Mugello and Silverstone and third places in Brno and Phillip Island, to ultimately conclude the season in third place.

After such a strong first year with Yamaha‘s Factory MotoGP Team, Viñales was hungry to show his talent again in 2018, but the season proved to be one of the most difficult in his premier class career. Nevertheless, the Spaniard kept his motivation high, scoring podiums at the rounds at COTA, Circuit TT-Assen, the Sachsenring, and Buriram. He returned to winning form in the race at Phillip Island, giving Yamaha its first victory since the round at Assen one year prior. He finished the season in fourth place overall, just five points behind his team-mate in third position.

2019 signalled a new start for Viñales. He changed his rider number from #25 to #12 and welcomed new Crew Chief Esteban García to his side of the Monster Energy Yamaha MotoGP pit box (he had worked with him before in 2013, winning the Moto3 World Championship). After a difficult start to the season, the changes that were made began to bear fruit. Though taken out by fellow riders on three separate occasions in the first half of the season (in Argentina, France, and Catalunya), the Spaniard still visited the podium regularly in 2019. He scored a third place in Jerez and followed it up with a stunning win in Assen, a second place at Sachsenring, third places at Silverstone, Misano, and Buriram, and another epic win in Malaysia. Viñales‘ relentless determination earned him third in the overall championship standings and has him fully motivated to push 100% in 2020.