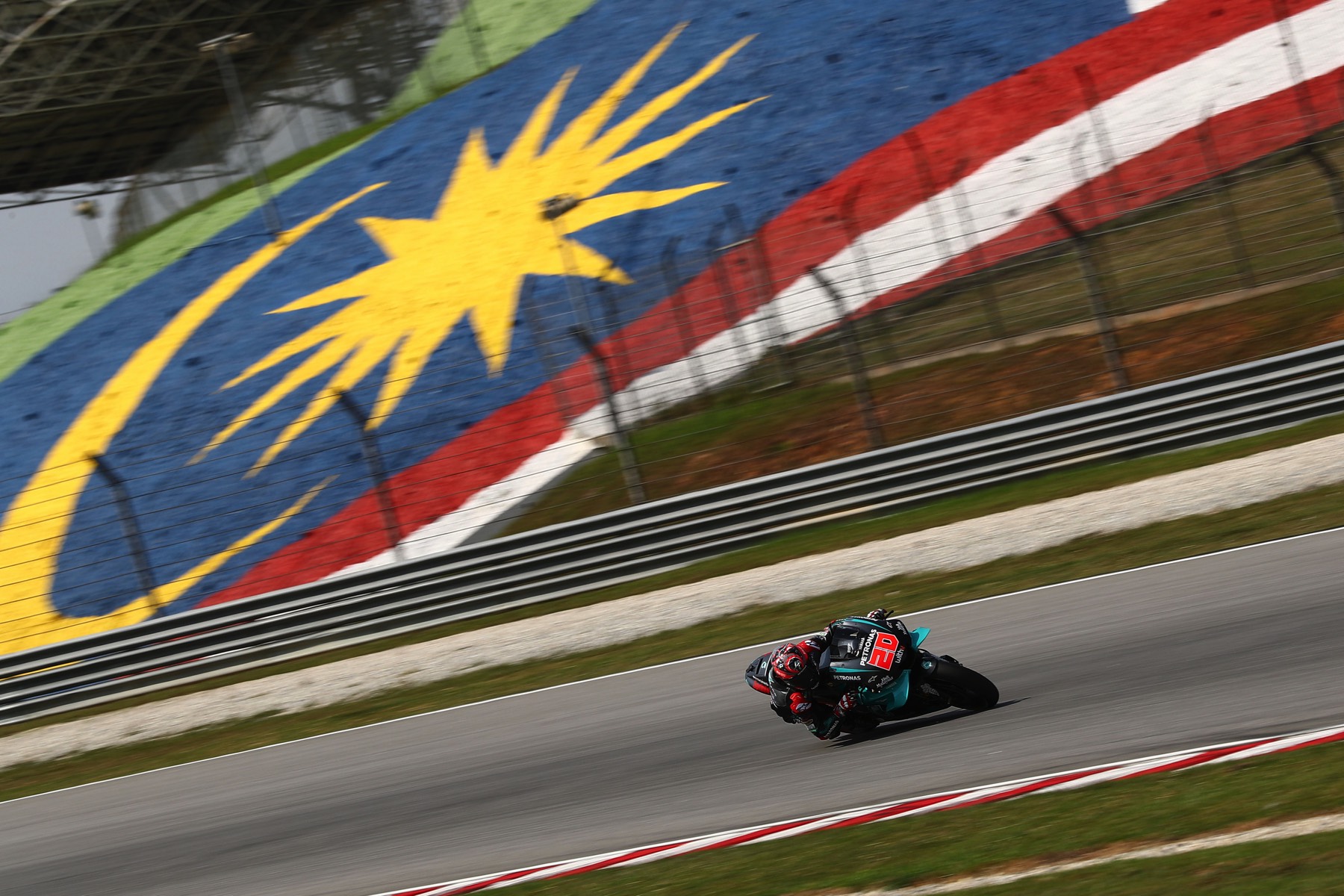 Fabio Quartararo (Petronas Yamaha SRT) began the Sepang Test in an increasingly familiar position: first. The Frenchman was the first man into the 1:58s and his laptime remained largely unthreatened thereafter, although some rain in the afternoon did stop play for a while and limit track time. Teammate Franco Morbidelli was second overall on Day 1 and came the closest to deposing him, only 0.051 off, with Alex Rins (Team Suzuki Ecstar) next up as the Spaniard completed the top three on Friday.

At Monster Energy Yamaha MotoGP, there was no Jorge Lorenzo out testing on Day 1, with the focus instead on Maverick Viñales and Valentino Rossi. They both had three bikes each in the garage: two 2020 machines with the new engine and frame and a 2019 version in order to test back to back. Viñales’ best was a 1:59.367 in sixth and Rossi’s a 1:59.569 in tenth.

Rins, meanwhile, put Team Suzuki Ecstar in third after a half century of laps for the Spaniard on Friday. There was aero on the agenda, and plenty under the covers for the Hamamatsu factory to focus on – including more work on the engine and a new swingarm, chassis, electronics… Rins’ best was a 1:59.195 in P3 and teammate Joan Mir took P9 with a 1:59.968 after a similar amount of laps. Test rider Sylvain Guintoli was also out on track to add another 48 laps to the count.

Cal Crutchlow (LCR Honda Castrol) was the fastest Honda on Day 1. The Brit leapfrogged up into the top three briefly before ultimately ending Friday in fourth after 33 laps, but it was a busy day for the number 35 as he spearheads much of Honda’s testing – with Marc Marquez (Repsol Honda Team) coming back from shoulder surgery, Takaaki Nakagami (LCR Honda Idemitsu) likewise, and Alex Marquez (Repsol Honda Team) making his premier class debut. Crutchlow had three bikes in the garage, one of which was a 2019 machine for back-to-back comparisons. The other two were 2020 machines, although not identical…

Marc Marquez’ best, a 1:59.676 after 37 laps, put him in 12th – with the focus on trying only the essentials as his recovery limits his laps somewhat. Reigning Moto2™ Champion Alex Marquez did a similar number of laps though, and he faced a 0.242 deficit to his teammate by the end of play despite finishing Friday just a position behind him. Nakagami had a steadier start to the test; his best a 2:00.815 as he comes back from injury.

Jack Miller (Pramac Racing) was the fastest Ducati man on Day 1. An improvement on his penultimate lap put the Australian up into fifth with a 1:59.236, behind Crutchlow by just 0.002. He had two 2020 bikes as well as a few “small parts” to try, with positive feedback coming from the Queenslander. Andrea Dovizioso (Ducati Team), meanwhile, put in a 1:59.666 and was just outside the top ten, doing 35 laps, with teammate Danilo Petrucci putting in a fastest lap of 1:59.939 after 42 laps. Francesco Bagnaia (Pramac Racing) was P17, Johann Zarco (Reale Avintia Racing) P19 and Tito Rabat (Reale Avintia Racing) P23.

Aprilia were ahead of the game early doors, with Aleix Espargaro (Aprilia Racing Team Gresini) top of the pile after the first hour and ten or so laps. After positive comments on the new 2020 bike following the shakedown test, that seemed to continue on the timesheets on Friday: Espargaro ended the session on a 1:59.427 in P7 after 40 laps, the laptime the same one with which he topped the timesheets earlier in the day. Lorenzo Savadori was also on duty for the Noale factory after the Italian had also taken part in the shakedown test, and he did 30 laps. Test rider Bradley Smith is expected to join the lineup as the test continues.

Pol Espargaro (Red Bull KTM Factory Racing) led the way for KTM on the first day. The Spaniard ended the test in P8 after a best of 1:59.536, and he put in 50 laps. The Austrian factory worked with their new chassis – on both factory and Tech 3 machines – as well as some aero, and the engine, and Espargaro says there’s more to do on the rear with a new swingarm… as always, it’s a packed program.

Test rider Dani Pedrosa was the next KTM on the timesheets in 15th, with the Spaniard doing nearly 50 laps. Miguel Oliveira (Red Bull KTM Tech 3) was close though, just over a tenth off Pedrosa and doing a similar number of laps as he comes back from injury that dogged the latter half of his 2019. Iker Lecuona (Red Bull KTM Tech 3) just pipped fellow rookie Brad Binder (Red Bull KTM Factory Racing)… but the two were only 0.008 apart in P20 and P21 respectively.