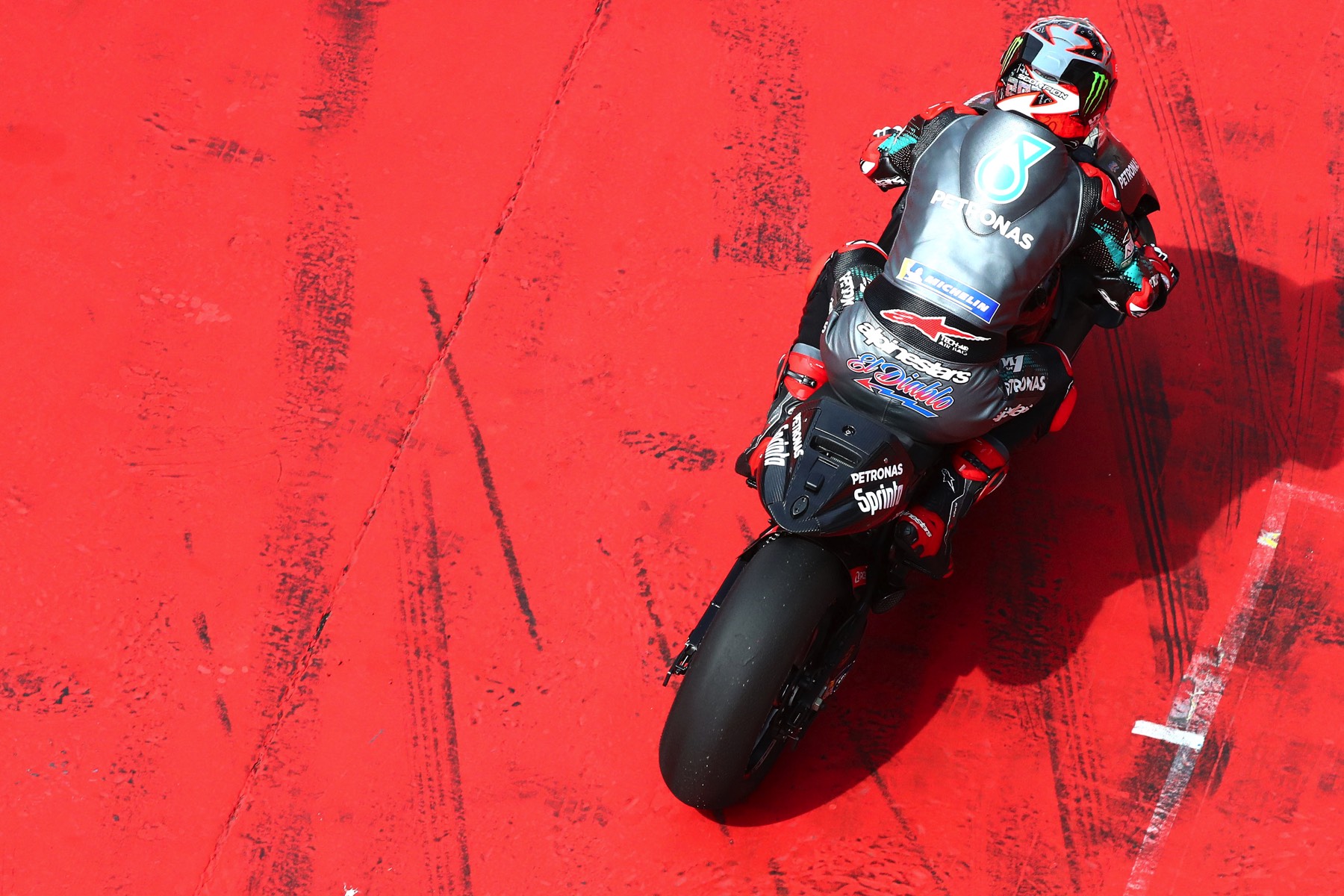 Fabio Quartararo (Petronas Yamaha SRT) was once again the man at the top of the timesheets on Day 2 of the #SepangTest, but this time the Frenchman made his mark on the 2020 factory machine as he got a taste of the new YZR-M1 on Saturday. The man he deposed was Jack Miller (Pramac Racing), who was once again the fastest Ducati, after the Australian had held on to P1 for some time. Third was another stellar performance that stole some headlines as Dani Pedrosa – erstwhile master of Sepang – put KTM into the top three and only 0.090 off the top; his 1:58.662 most definitely an eyebrow-raiser.

Day 2 saw the weather play nice, with track time uninterrupted and that proving valuable for many – and many putting in a good number more laps on Saturday. Quartararo’s 72 laps were testament to that and followed up a performance on Day 1 that was impressive but, in some ways, could have been expected – with the number 20 already having shown scintillating speed on the 2019 Yamaha. Getting on the new machine and proving able to put in a 1:58.572 not long after ensured Day 2 was more than a simple rinse and repeat. Teammate Franco Morbidelli was also quick in fifth after 60 laps, 0.259 off the top on an “A-spec” 2020 machine – without the new air intake and reportedly without the new engine. He crashed at Turn 2, rider ok.

Maverick Viñales (Monster Energy Yamaha MotoGP), meanwhile, slotted in right behind the Italian – only 0.062 in further arrears, although he did crash, just as he did on Day 1. The number 12 did 69 laps as both he and teammate Valentino Rossi continued to work with three machines each, and Rossi was tenth overall after 60 laps. ‘The Doctor’’s best was a 1:59.116. Yamaha test rider Katsuyuki Nakasuga suffered a crash, rider ok.

At Ducati, it was Jack Miller who was once again the fastest man on Borgo Panigale machinery. He did 50 laps and only lost out on the top by 0.069, with the positive reports on Ducati’s 2020 machinery continuing. In terms of position it was a “tougher” day on the timesheets for his fellow GP20 riders, however, with Danilo Petrucci (Ducati Team) in P13 followed by Francesco Bagnaia (Pramac Racing) and Andrea Dovizioso (Ducati Team) in 14th and 15th respectively; all three within a tenth and all three putting in nearly 60 laps. Dovizioso crashed at Turn 6, rider ok, causing a brief Red Flag solely to make sure he was away from the track and racing line.

Johann Zarco (Reale Avintia Racing), meanwhile, beat the laptime he set on Day 1 by over half a second, although he maintained the same position, and Ducati Corse Sporting Director Paolo Ciabatti Ducati Corse was spotted in the box with the Frenchman. Zarco’s teammate Tito Rabat was just behind him in position but three and a half tenths in arrears.

At KTM, Dani Pedrosa was the star attraction on the timesheets, and the ‘Little Samurai’ did his fastest lap at Sepang International Circuit – no mean feat given his number of premier class poles and wins at the venue. Pol Espargaro sung his praises too. Espargaro ended the day in P8 after nearly fifty laps and was happy with his day despite a tip off at Turn 1 – working on the new chassis and testing it with different setups, citing some key improvements in grip and stability. Brad Binder (Red Bull KTM Factory Racing) also improved, shaving eight tenths off his day one best and getting closer to fellow rookie Alex Marquez (Repsol Honda Team).

Miguel Oliveira (Red Bull KTM Tech 3) was P16 at the end of the day after 42 laps, continuing his comeback from injury and after also having taken part in the shakedown. Likewise his rookie teammate Iker Lecuona, who put in 41 laps as he adapts to the premier class, ending Saturday on a 2:00.396, although he did suffer a crash.

Just missing out on the top three after Pedrosa’s late lunge were Suzuki. The tables turned on the timesheets on Day 2 as Joan Mir (Team Suzuki Ecstar) was the leading Hamamatsu factory machine in P4, a 1:58.731 putting him only a tenth and a half off the top after 54 laps. Teammate Alex Rins put in 63 laps, and set his best of a 1:58.978 on the new chassis… citing it as a key step in the right direction. Mir saw it more as a balance of positives and negatives. Test rider Sylvain Guintoli was also on track and he did 58 laps.

For Honda, it was a more muted day on the timesheets, but it was reigning Champion Marc Marquez (Repsol Honda Team) who took back the honour of quickest for the factory after Cal Crutchlow’s (LCR Honda Castrol) P4 on Day 1. Marquez was ninth with a best of a 1:59.097 after 47 laps, although he crashed at Turn 3. Rider ok, bike less so. Crutchlow did 64 laps, with his huge workload continuing as he remains on point for test duty, and a best of 1:59.247 put him in P12.

Alex Marquez was top rookie once again although, as stated, had Binder for close company, and Takaaki Nakagami’s (LCR Honda Idemitsu) comeback continued to prove a challenge. He was P21 after 47 laps.

Aprilia’s new 90-degree V4 ended the day in P11 in the hands of Aprilia Racing Team Gresini’s Aleix Espargaro, with the number 41 putting in 43 laps and setting a best of 1:59.224. Top speed seems a key area of improvement so far, and test rider Bradley Smith was also out on track working on the project. He did 61 laps.

Now all that remains at Sepang is Sunday, with only one test day left before the paddock packs up and heads for Losail International Circuit in Qatar.