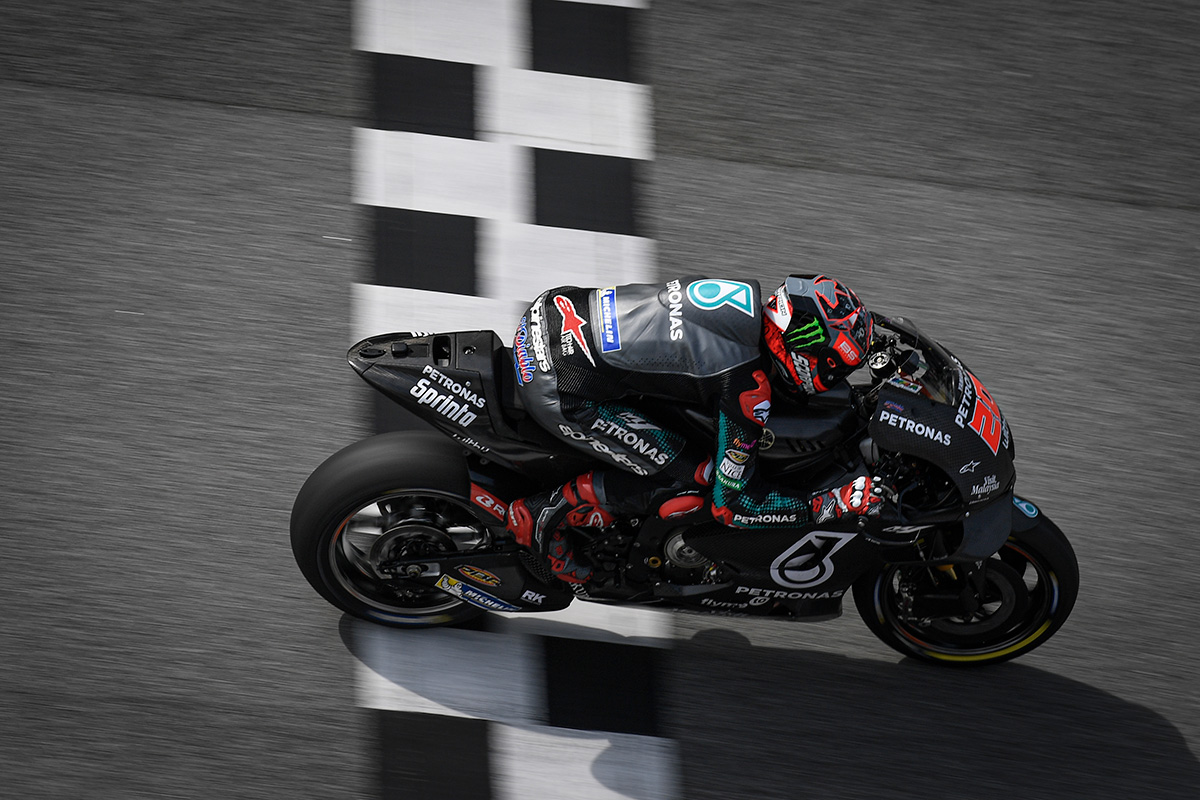 Fabio Quartararo (Petronas Yamaha SRT) made it a full house at the Sepang Test as he topped the timesheets once again on Sunday, with the Frenchman putting in a 1:58.349 to end the session close to the fastest ever lap of the Malaysian venue. He had some close company, however, with LCR Honda Castrol’s Cal Crutchlow taking second place, 0.082 off, and Alex Rins (Team Suzuki Ecstar) taking third within 0.101 of the top. All manufacturers ended the test within 0.345.

The weather was on side again on Sunday, with only the last half hour or so affected by rain – but a few finished a little early whether by design or mishap. For Quartararo it was a shorter day than Saturday, as the Petronas Yamaha SRT rider put in 57 laps, setting his fastest on his 17th. Teammate Franco Morbidelli, on his “A-spec” machine, did 58 laps and ends the test in P13.

Valentino Rossi (Monster Energy Yamaha MotoGP) was actually the second fastest Yamaha rider on Sunday. His best was a 1:58.541 and that puts him in fifth after just over a half century of laps. Rossi’s teammate Maverick Viñales, meanwhile, was way down the timesheets yet positive about the test; his best a 1:59.169 in P18 – but after a whopping 83 laps and some impressive long run pace. On Saturday evening, the Spaniard was especially impressed by the top speed improvement from the new engine.

Test rider Jorge Lorenzo was out on track on Sunday too, with the Spaniard adding another 46 laps to the Iwata marque’s program and proving a key point of interest. But Yamaha had another slightly different talking point too – something that looks very much like a holeshot device, spotted on Viñales’, Rossi’s and test rider Katsuyuki Nakasuga’s machinery.

Honda’s test program workhorse Cal Crutchlow kept them in the hunt for the top on Day 3. The Brit’s best was a 1:58.431 and, predictably, he was one of the most prolific on track, completing 69 laps. Reigning Champion Marc Marquez did 47 laps and was P12, his day ending in a mishap at Turn 15 – rider ok. The Spaniard also reported in his debrief that he’s more focused on getting the technical side of the new season sorted, rather than worried about his shoulder recovery.

His rookie teammate Alex Marquez was 16th and did 49 laps, ending the test less than half a tenth off getting into the 1:58s. Takaaki Nakagami (LCR Honda Idemitsu) did a best of a 1:59.860 a bit further back, completing 48 laps.

Alex Rins was back in charge of the Suzuki teammate battle for supremacy on Sunday. The number 42 almost made it three bikes in a tenth but for a single thousandth, and he did an apt 42 laps, downing tools a little early. Teammate Joan Mir was P10 after 32 laps, his best a 1:58.736 despite a crash at Turn 9. The positivity from the Hamamatsu factory seems positively brimming after the test, and some impressive long run pace in the mid 59s made for good reading too.

Ducati, meanwhile, saw their top position on the timesheets taken over by Francesco Bagnaia (Pramac Racing) as the Italian put in a 1:58.502 to secure P4 – only 0.052 off Rins. Ducati Team’s Danilo Petrucci was sixth with a 1:58.606, and Jack Miller (Pramac Racing) eighth… but just 0.010 behind the Italian. Bagnaia and Miller both crashed at Turn 15, riders ok.

Andrea Dovizioso (Ducati Team) was a little further down in P14 with a best of 1:58.859, with every GP20 rider putting in around 50 laps each on Sunday. But Dovizioso sounded pretty satisfied, working on setup and feeling on the new tyre in the morning – and pointing out that both he and Miller set their best on the medium…

Pol Espargaro (Red Bull KTM Factory Racing) finishes the Sepang test in a similar position to where he started it, in seventh, but the number 44 was nearly a second quicker on Day 2. He only put in 34 laps on Sunday, but was also at the shakedown with KTM. His teammate Brad Binder had a pretty solid Sunday too as he remained close to fellow rookie Alex Marquez on the timesheets; the South African shaving nearly a second and a half off his Day 1 best.

Red Bull KTM Tech 3’s Miguel Oliveira, meanwhile, impressed on Day 3, putting in a 1:58.764 as he returns from injury – and slotting into P11 just ahead of reigning World Champion Marc Marquez despite doing only 22 laps. Oliveira’s teammate Iker Lecuona put in just 23 laps as well, but the Austrian factory also fielded test rider Mika Kallio as the Finn took over from Day 2 hero Dani Pedrosa. Kallio suffered a crash at Turn 15, rider ok.

Aprilia also leave Sepang securely belonging in the top ten, having hit the ground very much running with the new RS-GP. Aleix Espargaro led the way for the Noale factory once again as he took ninth with a 1:58.694, putting in 45 laps – and saying there was also more to come from a single lap, which was proving a challenge to maximise. And that’s borne out in the awesome long run pace the number 41 laid down, with a host of mid 59s. Test rider Bradley Smith was also on duty once again, adding 61 laps for the Italian marque.

That’s it from Sepang, now it’s time to head for Qatar for the second – and final – pre-season test. That starts in a couple of weeks on the 22nd of February, with the grid now facing just three days of track time before the season begins in earnest.