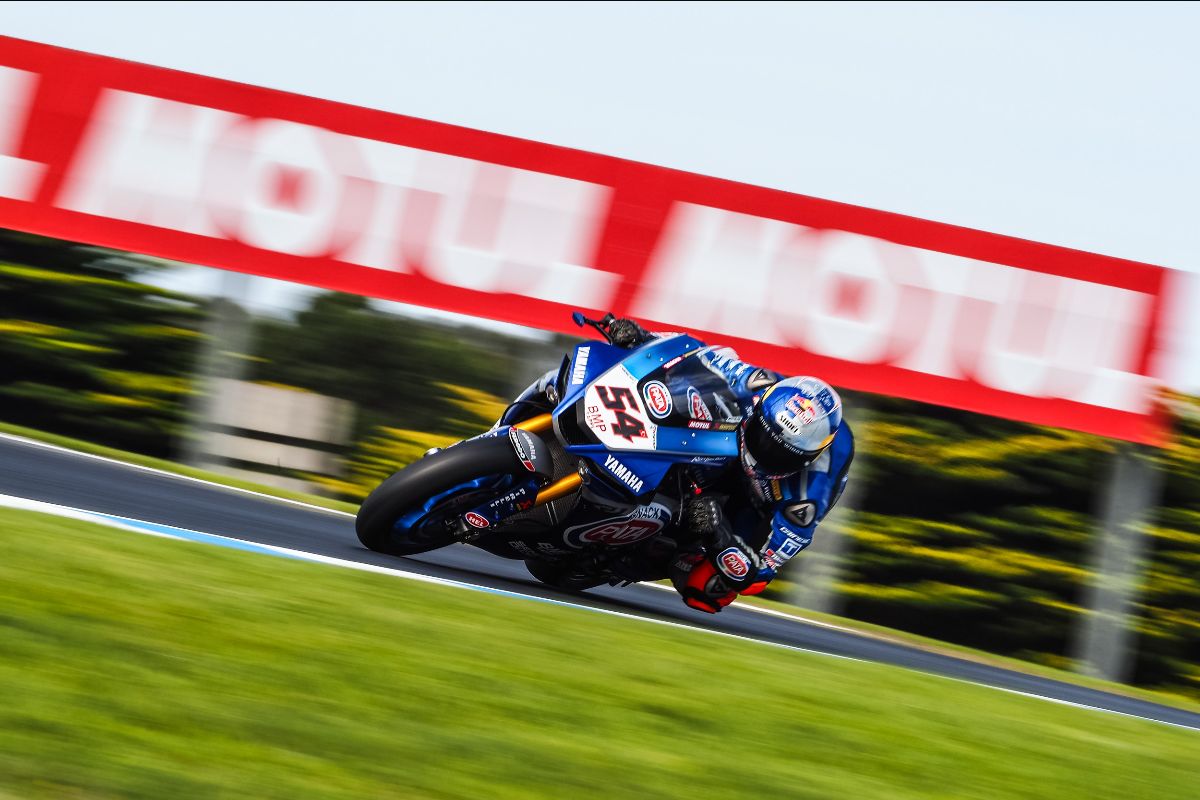 Phillip Island hosted the final Official Test for World Superbike ahead of the season opener with Toprak Razgatlioglu ending the day fastest after a rain-affected second session.

The opening day of the 2020 MOTUL FIM Superbike World Championship Official Test came to an end with Toprak Razgatlioglu (Pata Yamaha WorldSBK Official Team) leading the field after posting a time in the 1’30 bracket. In a frantic session where almost every rider improved on their morning times, drops of rain, red flags and constant unpredictability made for an action-packed opening day of testing.

Toprak Razgatlioglu had been top of the last test at Portimao and he consolidated his position as ‘man to beat’ ahead of the opening weekend, slamming in a strong lap time that edged him clear of Tom Sykes (BMW Motorrad WorldSBK Team). Toprak, like teammate Michael van der Mark (Pata Yamaha WorldSBK Official Team), had been focusing on some small upgrades to the bike and trying to find the balance between performance and durability of the tyres. Van der Mark himself was one of just two riders to not improve in the afternoon, finishing seventh come the end of the day.

Tom Sykes (BMW Motorrad WorldSBK), who was looking to refine set-ups of his bike after working on chassis and electronics in the previous tests at Jerez and Portimao, finished second in the classification for the day, with just 0.022s separating Sykes from Razgatlioglu. Sykes’ teammate Eugene Laverty (BMW Motorrad WorldSBK Team) was in eighth place and less than a second off of the top time, focusing on race runs and aiming to bag as much dry running as possible.

It was even closer between Sykes and Loris Baz (Ten Kate Yamaha Racing) in third place as he was just 0.015s from Sykes and 0.037s from Razgatlioglu. Baz has been a stand-out performer in pre-season testing and is hoping that his pace translates into the races. Baz was subsequently top Independent rider too as Yamaha topped and tailed the top three.

Reigning Champion Jonathan Rea (Kawasaki Racing WorldSBK Team) continued to show his pace from the Jerez test with fourth at Phillip Island, after focusing on tyre performance ahead of the Yamaha Finance Australian Round. Rea’s prowess at Phillip Island has been notable in the past but is without a victory at the circuit since 2017, something he will use testing to work towards. His teammate Alex Lowes (Kawasaki Racing Team WorldSBK) was in ninth place, despite suffering a Turn 4 crash – rider OK.

Leon Haslam (Team HRC) completed the top five at the end of day one. Honda’s return as a full-factory outfit meant it has been focusing on multiple aspects of the bike ahead of the season-opening round at what he has already stated as his “favourite circuit”. Haslam’s teammate, Alvaro Bautista (Team HRC), was down in 15th and 1.8s off. The 2019 triple race winner at Phillip Island will be aiming to get back on the pace on Tuesday.

Scott Redding (ARUBA.IT Racing – Ducati) was the fastest Ducati rider in sixth place after using the test to do race runs in order to carry out some fine-tuning to the set-up. Redding feels confident following Ducati’s 2019 results at Phillip Island and at a track where he has historically gone well at in Moto2™ and MotoGP™. His teammate, Chaz Davies (ARUBA.IT Racing – Ducati), was down in tenth, 1.373s off the top time from Toprak Razgatlioglu.

On the fringes of the top ten was Sandro Cortese (OUTDO Kawasaki TPR) in 11th, as he aims to gel with the ZX-10RR. Michael Ruben Rinaldi (Team GOELEVEN) was 12th, ahead of Xavi Fores (Kawasaki Puccetti Racing) and an impressive Maximilian Scheib (ORELAC Racing VerdNatura). Federico Caricasulo (GRT Yamaha WorldSBK Junior Team) was in 16th, one place ahead of teammate Garrett Gerloff, whilst Leon Camier (Barni Racing Team) was 18th on his return.

The second session had been disrupted by rain while the opening session had ended 30 minutes early following oil on track between Turns 3 and 4, caused by Takumi Takahashi’s (MIE Racing Althea Honda Team) Honda. Takahashi finished in 19th overall.

The first day of testing for the FIM Supersport World Championship has come to a close Down Under at the Phillip Island Grand Prix Circuit, with surprises and talking points aplenty. A rookie in the class but going into day two as the man to beat, Andrea Locatelli (BARDAHL Evan Bros. WorldSSP Team) showed promise with a healthy advantage at the front of the field, with three different manufacturers inside the top five.

In warm and dry weather conditions, Andrea Locatelli romped to the top of the timesheets and threw down the gauntlet to the World Supersport opposition. The Italian was right on the pace at the Portimao test and continued to shine in Australia. He was the first rider inside the 1’33 bracket, and was just under 0.3s from the WorldSSP pole lap record. The former Moto2™ top six contender is the sole entrant for the BARDAHL Evan Bros. Yamaha team in 2020.

Randy Krummenacher (MV Agusta Reparto Corse) confirmed his speed from Jerez, with the Swiss rider refining his chassis set-up on his was to second. With a good history at the track, birthday-boy Krummenacher – who turns 30 today – also worked on engine configuration but hailed the bike as far more competitive compared to when he first rode it. Krummenacher’s teammate, Raffaele de Rosa (MV Agusta Reparto Corse), was in third whilst his other teammate, Federico Fuligni was in 12th.

Completing the top four was Isaac Viñales (Kallio Racing), with the Spaniard getting his first taste of 2020 action having not participated in the pre-season testing. The Finnish-based team welcome a new rider for the new season, with Hannes Soomer (Kallio Racing) coming in. The Estonian was in tenth come the end of day one as he adapts to Yamaha machinery. Another Yamaha in the shape of Steven Odendaal (EAB Ten Kate Racing) was up at the sharp end, completing day one in seventh.

2017 World Supersport Champion Lucas Mahias (Kawasaki Puccetti Racing) led the way for Kawasaki, as the Frenchman aimed to pick up where he left off at the end of the last decade. The Frenchman, who was fifth, focused on the new slick tyres and looked to put all of his hard work from the previous month together to find form at Phillip Island. His teammate, Philipp Oettl (Kawasaki Puccetti Racing), was in eighth place and less than a second off of the top time by Andrea Locatelli.

2019 bronze-medalist Jules Cluzel (GMT94 Yamaha) was in sixth place, just over 0.6s behind Locatelli at the front of the field. His primary focus was on the slick tyres and is anticipating them to add another dimension and challenge at each circuit in 2020. His teammate, Corentin Perolari (GMT94 Yamaha), was in ninth place, a further six tenths behind Cluzel.

Besides Locatelli at the front of the field, Odendaal in seventh and Oettl in eighth, there were plenty of impressive rookies just outside of the top ten. Turkish rookie Can Öncü (Turkish Racing Team) was in 11th, with the former Moto3™ Grand Prix winner shining brightly. Manuel Gonzalez (Kawasaki ParkinGO Team) finished in 13th place on ZX-6R, as he took to the Phillip Island track for the first time. German rookie Patrick Hobelsberger (Dynavolt Honda) was 18th, one place ahead of Britain’s Danny Webb (Wepol Racing Team) was in 19th, whilst Andy Verdoia (bLU cRU WorldSSP Team by MS) was 21st.

Notable incidents throughout the session included Jaimie van Sikkelerus (MPM Routz Racing Team), who suffered a fast crash at Turn 8, although he was able to escape without injury. Wildcard Oli Bayliss (Cube Racing Team) was less than three seconds off the pace in 22nd. Off-track, Galang Hendra Pratama (bLU cRU WorldSSP Team by MS) has had visa issues which are now resolved, so he will be on track for his first Phillip Island experience tomorrow.